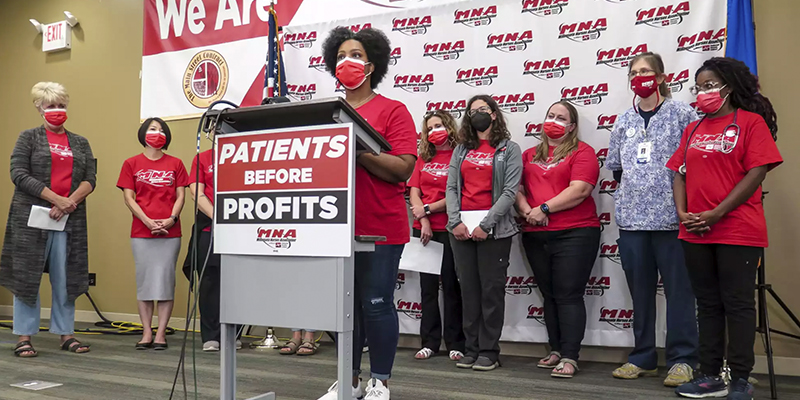 Tracie Ducksworth, a mental health nurse for Fairview, talked about concerns about staffing levels and safety at Minnesota hospitals after a strike vote by the Minnesota Nurses Association. Ducksworth spoke at a press conference at union headquarters on Tuesday.Tim Nelson | MPR News

Members of a major Minnesota nurses union have said they favor going on strike if negotiations don’t resolve differences with management of several health systems in the Twin Cities and Duluth.

Around 15,000 members of the Minnesota Nurses Association cast ballots Monday on whether to authorize a strike, with the union announcing late Monday night that its members voted “overwhelmingly” in favor.

“Nurses do not take this decision lightly, but we are determined to take a stand at the bargaining table, and on the sidewalk if necessary, to put patients before profits in our hospitals,” union President Mary Turner said in a statement after the vote.

The vote sets up another phase in negotiations that go back to last March, according to the union. The disagreements appear to be over staffing levels, working conditions and paid family leave. Turner said union leaders will be meeting Tuesday night to discuss next steps, including the timing and duration of a possible strike.

Union officials say one of the biggest issues is retention and that understaffing contributes to overwork. They say nurses are caring for twice as many patients as normal, they’re having to skip breaks, are becoming burned out and leaving the profession altogether. While the conditions existed before the COVID-19 pandemic, they are worse now.

“We have been through hell and back. And we will not stop fighting until we are given a good and fair contract, a contract that we deserve,” Brianna Hnath, an ICU nurse at North Memorial Health Hospital, said at a union news conference Tuesday morning in St. Paul. “Not just for all we’ve endured over the last two years, but for all we’ve endured before that.”

Hospitals say they want to see progress at the bargaining table. Some systems, including Allina Health, say they have offered increases of 10.25 percent over three years along with other compensation, and commitments to addressing other issues raised by the union.

The union needed a supermajority to authorize the strike vote, about two-thirds of members. It did not release vote totals late Monday, saying only that the measure passed “overwhelmingly.”

The vote gives the elected nurse negotiators the ability to call a strike, with a 10-day notice to employers.

MNA officials say 15 hospitals at seven health systems between the Twin Cities and Duluth would be affected by the strike. In addition to Allina, they are M Health Fairview, Children’s Hospital, North Memorial and HealthPartners, specifically Methodist Hospital in St. Louis Park. In Duluth, it’s Essentia and St. Luke’s.

Turner said the MNA members from all the various hospitals are committed to negotiating as a single group.

“We will stick together like glue because that is our power,” she said Tuesday morning. “And more importantly, we have to stick together. This is a crisis.”

In a statement after the vote results were announced, Allina Health said it was “disappointed the union choose to take a strike authorization vote instead of working towards a fair and sustainable contract. A strike does not benefit anyone and will only further delay reaching a settlement at the bargaining table.”

Allina said it’s looking forward to another negotiating session on Aug. 30 — and pointed to a contract agreement recently reached with union nurses at its Hastings facility.

The Twin Cities Hospitals Group, which represents Fairview, Children’s, North Memorial and Methodist, issued a statement also expressing disappointment in the vote outcome and calling on the union “to agree to mediation and return to the table to negotiate with the hospitals in good faith.”

The group called the union’s wage-increase proposal “unrealistic and unaffordable” — and said it has reached agreement with the union in other areas such as addressing workplace violence, as well as diversity, equity and inclusion.

St. Luke’s in Duluth said it remains committed to “bargaining in good faith” with the union, and wants to bring in a mediator to those talks.

Alan Benson, an associate professor at the Carlson School of Management at the University of Minnesota, said a strike is likely something that both sides have prepared for.

“Long before we’ve even reached this point, there’s going to be movement on both sides, the union will have put money into a strike fund to supplement wages for the nurses who go on strike, the hospitals have developed contingency plans and potentially train people to fill in those vital roles,” Benson said.