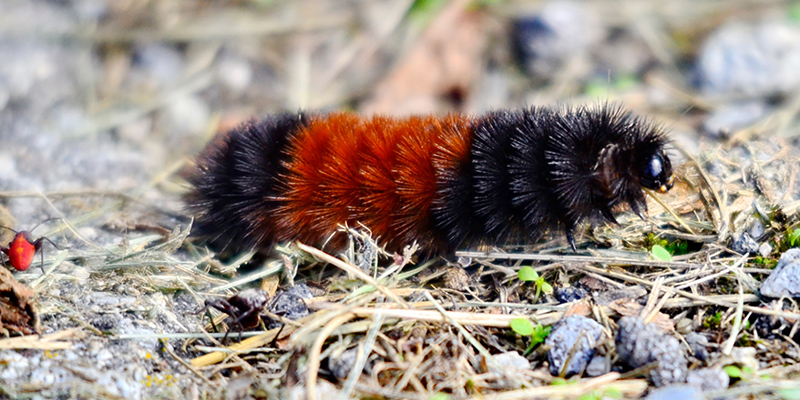 Unless you study like a professional entomologist (scientists who study insects) there are probably a very limited number of caterpillars you can name. One is likely the monarch caterpillar, which transforms into the brilliantly orange and iconic monarch butterfly and then there is the ever popular woolly bear caterpillar. The adult form of the woolly bear is a not-as-well-known: the Isabella tiger moth, a relatively small tan-ish brown moth peppered with some dark spotting, definitely not as showy as other moths and butterflies on the scene.

Even with the promise of anything-but-flashy adulthood the woolly bear caterpillar is still one of the most well-known caterpillars out there and for good reason; they have folklore attached to their fuzzy little bodies. Most people know at least one story surrounding this furry critter and its ability to predict the weather. But, is there any validity to this claim? Some stories state that the direction the woolly bear is traveling will tell you how bad the winter will be. A caterpillar traveling north indicates a mild winter and south means a harsher one. Other stories look at a woolly bear and see how much black vs rusty coloration the body has to predict the impending winter. Legend states that if the rusty color band is wide then we are in for a mild winter. If the rusty color band is narrow and the black bands are wide then a severe winter is on the horizon.

The question still remains; can the change in the woolly bear appearance surely be an accurate predictor of the future? Entomologists have stated that the woolly bear coat will change depending on age, as well as weather, but usually the coat that we see to make predictions off of is telling us all about winter … that has already happened. The older the caterpillar is, the narrower the rust band will be, indicating an early spring, long growth season, or even a mild winter the previous year. Young caterpillars will have a wider rust band meaning they got a late start either because of weather (longer winter), or food availability.

We see woolly bears most often in September. as they are on the move to find the perfect hibernating spot, usually under a pile of leaves, debris, and downed logs. (So be sure to leave your leaf litter be!) Woolly bear “fuzz” is called setae and it helps them freeze properly during the winter. These caterpillars can produce an antifreeze in their bodies called glycerol which keeps the interior of their cells from freezing through. This allows the woolly bears to hibernate in extreme conditions, even in the middle of an ice cube! After hibernation it will cocoon, emerge an adult, lay eggs, die, and the cycle begins anew.

So whether you are a woolly bear believer or not, this folklore is a fun way to inspect and enjoy nature and have a fun wiggly predictor of the winter to come.

September at the Nature Center