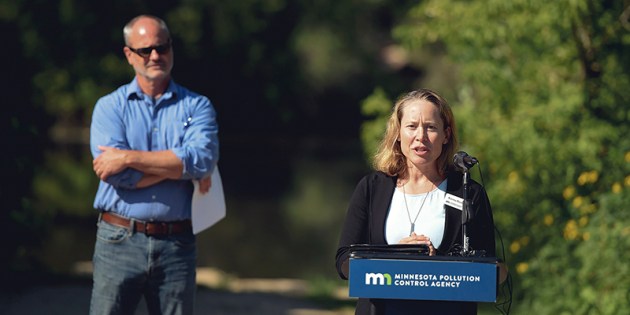 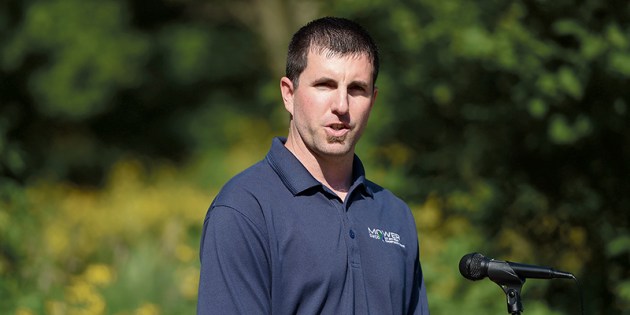 Cody Fox, district manager of the Cedar River Watershed District talks Tuesday morning during the announcement that agency received a grant from the Minnesota Pollution Control Agency for $78,000. Eric Johnson/photodesk@austindailyherald.com 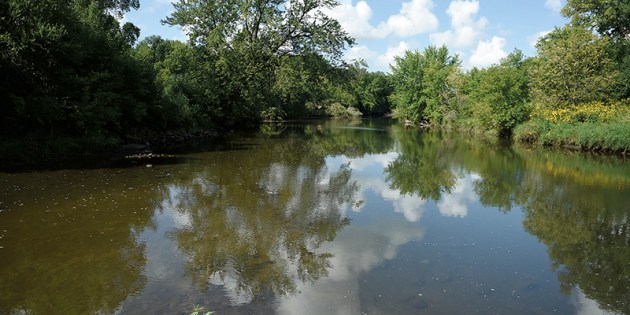 The Cedar River flows behind Driesner Park and in the past has been the point of several flood events. It was announced that Austin was one of several communities to receive a grant from the Minnesota Pollution Control Agency to prep for extreme weather events. Eric Johnson/photodesk@austindailyherald.com

On Tuesday morning, the Minnesota Pollution Control Agency, along with the Cedar River Watershed District, announced that the CRWD was receiving a grant for $78,000 for extreme weather and climate change preparations.

Austin is one of 12 municipalities throughout the State of Minnesota to receive a grant through this initiative.

“This partnership between the Cedar River Watershed District, the City of Austin, and the Minnesota Pollution Control Agency demonstrates the importance of collaboration in preparing communities for the effects of climate change,” said MPCA Commissioner Katrina Kessler. “By working together, we are creating innovative solutions that protect our thriving economy, environment and way of life here in Minnesota.”

The announcement was made at the confluence of the Cedar River and Dobbins Creek in Driesner Park and served to highlight some of the things that the money will be used for, including assessing, evaluating and developing water infrastructure projects to improve stormwater systems and how best to prepare for heavy rain events.

In years past, heavy rain events have been particularly devastating for Austin and lead directly to the historic flood of 2004, however, mitigation efforts by a number of entities in the Austin area have contributed to a better environment in order to help control these events should they rise again.

However, it will also help to protect current projects by the CRWD as well as future projects.

“We’ve got existing projects, about $7 million worth of projects, in the ground that we want … as future rain falls keep increasing … make sure our existing projects are also okay and also make sure we’re designing these future projects to make sure they are going to work long term,” said Cody Fox, district manager for the CRWD. “Make sure all of them work across the board and we don’t have any blow outs.”

The round of grants come with the recognition of the increasingly frequent extreme weather events that are accompanying climate change. According to a recent poll conducted by the MPCA, 87% of local governments reported recently experiencing the impact of at least one weather trend caused by climate change. Forty-two percent of Minnesota communities reported the need for additional funding for planning and infrastructure upgrades to address these impacts.

It’s hoped that by investing now, through these grants, that other communities can learn from the steps taken by those who have received the grants.

“Austin and Moorhead and communities that are on rivers and have rivers integrated into their way of life makes sense for investment in climate,” Kessler said. “We also know its impacts are felt in municipalities that are directly adjacent. We are excited to learn new things from Austin and others who are in this first round of grants. The projects they are able to bring to fruition and lessons learned will inform all of us how we can do this better going forward.”

Another important part of this grant is to reduce risk to locations in Austin that are home to low-income residents and people of color.

“We were looking at for communities across the state … because we know this is impacting everyone,” Kessler said. “We’re also interested in communities who have areas of their municipalities where there have been disproportionate impacts on environmental justice communities and making sure we prioritize the investments in those areas first.”

It represents a total response to an entire community.

“This is exactly what we need to see,” said Rep. Patricia Mueller. “We’re able to get the most impact on a local level.”

As this money is utilized, Austin will also see a reflection of prior work already put into place to minimize weather-related impacts, particularly in flood mitigation.

“It’s pretty big, just across the board,” Fox said of prior efforts. “Not just what we do, but the city has built a lot of flood protections and the county has done a lot of work too. It’s sometimes hard to see because you get those big rain events where it’s still not going to be crystal clear, but we’ve had a lot of residents say, ‘wow, this is totally different than it used to be.’”