Event to celebrate The Tower 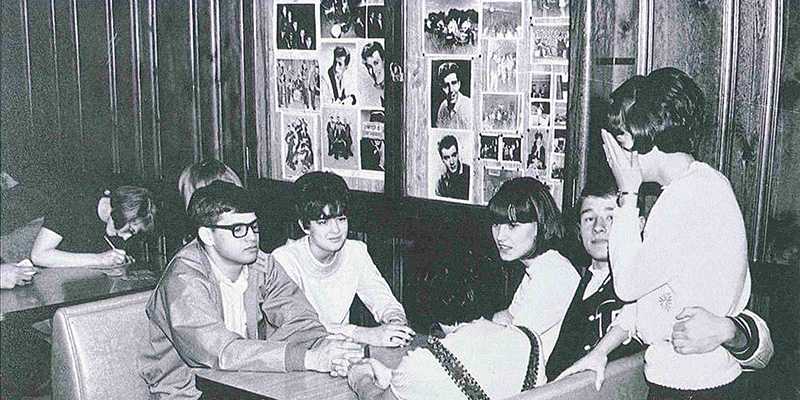 Students hang out at The Tower, a popular former hang out for teens in Austin. Photo provided

If you were a teen in the 50s, 60s and early 70s, then you are more than likely familiar with The Tower, one of the hottest teen clubs in the state of Minnesota.

That legacy will be celebrated on Friday, Aug. 26 with the Tower Tribute, which will be held from 5:30-11:30 p.m. at the El Parral Ballroom, formerly The Terp Ballroom.

With music provided by Rush Hour and Denny Charnecki and the DC Drifters, organizers hope that this night of remembrance and fun will bring back the feel and the vibe The Tower created during its years of business.

“It’s a tribute to the original founders of The Tower,” said Bruce Folken, class of 1968 and frequenter of The Tower.

The Tower was opened on Aug. 31, 1957, the result of efforts by three men in Austin looking to give teens a place to go, hang-out and let loose.

Clarence Nybo, partnered with Dale Modine and Gar Nash to bring The Tower to reality.

“Clarence decided he wanted to create Austin’s version of American Bandstand in Austin,” Folken said. “He took over the former Elks Club, which was on the second floor of the building that was on the East Side.”

The Tower was open after school and on the weekends, when some of the biggest bands of the state would play. Admission was just 25 cents during the weekdays and 75 cents on the weekend.

A photo of the bar area at The Tower that provided snacks and beverages for the teens.
Photo provided

“We called it the stairway to heaven,” Folken said, referring to the long flight of stairs teens took. “You get to the top and all of your friends were there. It united the town of Austin.”

This story of how The Tower came to be was the backbone of how the tribute came into being.

“I’m a serial nominator. I nominated Clarence Nybo for the Austin High School Music alumni award,” Folken said. “As I read into it, it just so happens the Austin ArtWorks Festival was 65 years from the day The Tower opened.”

“I contacted his daughter and we started talking. She told me the story and I got hooked,” Folken continued. “We needed to honor and remember the memory of the guys who started The Tower. Who gave us a central meeting point we wouldn’t have had.”

The Tower was somewhat of a rarity in the area and the state. While there were plenty of clubs, there weren’t that many places just for teens.

During its time, The Tower collected performances from well-known Minnesota acts like The Mustangs, The Castaways and Liar Liar.

Barry Rush, the founder of Rush Hour, was part of the opening act — The Saints — that played at the Tower on opening night in 1957. The DC Drifters also played The Tower.

However, The Tower was also a source of inspiration.

“What it created was a lot of musicians,” Folken said. “A lot of these people started garage bands and they would stand there and watch these guys. It just became a ripple effect to generate musicians. Austin had a great music, theater, arts, orchestra program and all of the churches had great choirs.”

The vibe that Nybo, Modine and Nash created include not just music, but food and games as well. It was the perfect teen hang-out.

Folken is hoping the event will be a starting point for The Tower’s lasting legacy. The first step of that is to hopefully create an annual event that could eventually morph into a two-day event.

Folken is hoping that at some point a statue of Nybo, who had been with The Tower the longest, might be erected as well as a lasting source of help for current students.

“Hopefully we can raise enough money to start to have scholarships for kids in conjunction with the MacPhail Center [for Music],” Folken said.

There is also Tower apparel available at both Sweet Reads and Sterling Main Street.

“I just want to thank Tim Duren for the job, Lisa Deyo (Sweet Reads) and Jenny Legried of Sterling,” Folken said. “The merchants in Austin have been great to work with.”