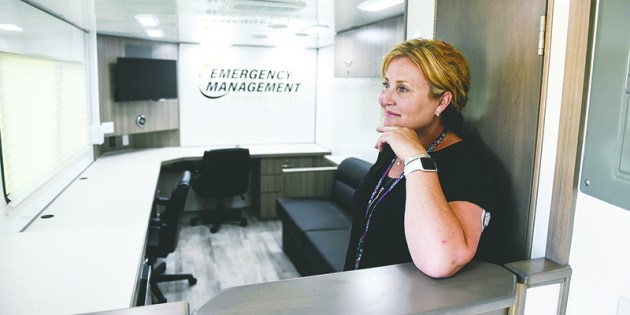 Director of Emergency Management, Amy Lammey, shows off the interior of the department’s new trailer, which arrived Tuesday. Eric Johnson/photodesk@austindailyherald.com 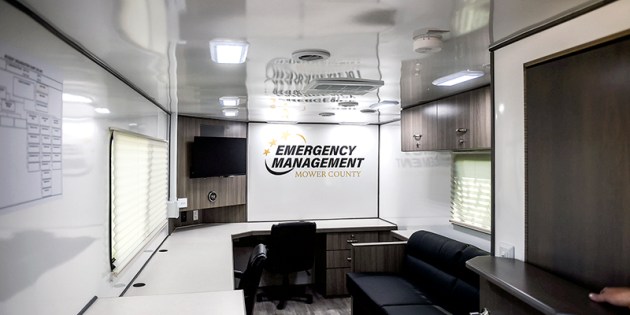 The new trailer of Emergency Management features five work stations, a computer screen and plenty of room for responders to any kind of situation. Eric Johnson/photodesk@austindailyherald.com 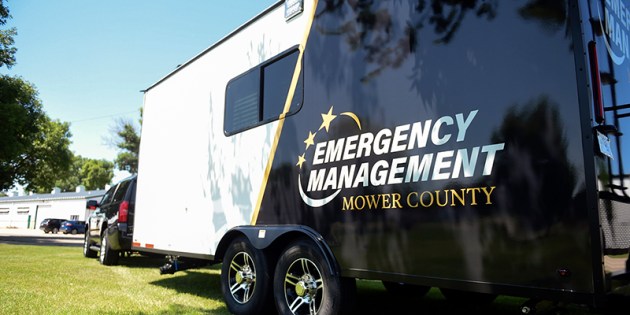 Emergency Management’s new trailer will be on display to the public at the Mower County Fair, which starts next Tuesday. Eric Johnson/photodesk@austindailyherald.com

Need highlighted during the April tornado that struck Taopi

The county’s new trailer was unveiled Wednesday and is ready to deploy as needed, whether that is for an emergency, like the April 12 tornado that struck Taopi, or any other of a variety of needs that may come up.

“It arrived (Tuesday) and went straight to the county shop to get more outfitting,” said Emergency Management Director Amy Lammey. “Today is its first journey through Austin.”

The trailer comes complete with five workstations, a computer monitor and the overall capability to be the central location of any situation that might come up.

A big step toward purchasing the trailer came during the aftermath of April’s storm, when the county was able to make use of a trailer loaned to them by Freeborn County.

“When we went looking for a trailer, we wanted one with more office type space versus hauling space,” Lammey said. “The one in Freeborn County was great to have, but after we lived in it for a week we knew what we wanted.”

In a stroke of luck, the trailer turned up fairly quickly during the search, coming with most of what the county was already looking for and needing just a few additions.

“We looked at other examples where people had put things together and done custom builds,” said Deputy Director Capt. Dave Pike. “We were able to take what they had on the lot and they did some outfitting there for us at the dealership where they added scene lighting and hook-ups for two-way radios.”

However, it was the need itself that was highlighted during the storm recovery.

“(County) commissioners recognized a need by seeing how we operated in Taopi by utilizing resources from other counties,” Pike said. “They saw an opportunity to step up and provide some resources that will make the job easier for all the responders in the county. This is a resource that will be utilized by many different organizations within the county and those out in our rural areas.”

“It’s actually a huge honor for them to recognize what we did and what we need,” Lammey added. “It wasn’t something emergency management or anybody went and asked for. They actually said, ‘We’ve got some money set aside, do you want a trailer?’”

The process of purchasing the trailer was quick and the price tag for the trailer came to around $50,000 when everything was finally added to it.

“We found a  trailer on Saturday, went to the board on Tuesday and purchased the trailer on Tuesday afternoon,” Lammey said. “That just doesn’t happen. They looked at what we wanted and realized it was going to be a good work space for us.”

What really is going to stand the trailer out as being versatile though, is how it will get used.

Not only can it be brought out for emergencies, but it can also be used for law enforcement training and community outreach.

The public will get its first look at the trailer when it’s displayed at the Mower County Fair, which begins next Tuesday.