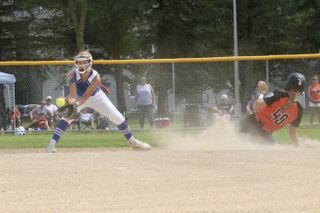 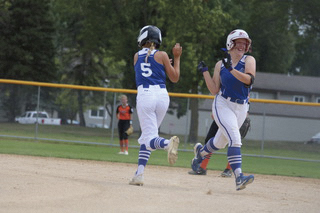 Jenna Christopherson (5) and Nora. Bamlet celebrate a run for Hayfield Post 330 at the state tournament in Mankato this past weekend. Photo provided by Shannon Tempel 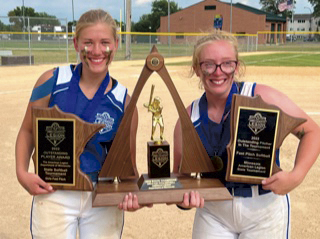 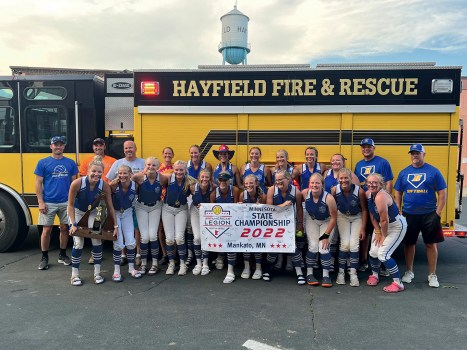 It wasn’t exactly how she thought it would happen, but Anna Bamlet ended her Hayfield softball career by winning a state title for her hometown.

Bamlet and Hayfield Post 330 sealed the deal when they topped Browerville 9-5 in the Minnesota State Legion Softball championship game in Mankato this past weekend. It was the first ever state Legion softball tournament in Minnesota history and players didn’t even know that they would have a summer season until this past March when they found out there would be a league.

“This was my last chance to win that childhood dream of a state title,” Bamlet said. “It may not have happened the way I thought it would, but it’s crazy and surreal. I was so proud and so happy for the community and the opportunity. It was a sense of closure for my last game in that blue uniform.”

Besides elation, Bamlet also felt a little exhausted after her final game. Besides playing for Hayfield, she was also logging in games for her summer team, the Minnesota Stix, which lost in the national semifinals in Mankato. Bamlet played nine games in a span of four days as she pitched, played first base and outfield for the Stix.

In all, she pitched a total of 40 innings over the weekend. Bamlet struck out 40 hitters in her three games with Post 330.

“It was a lot in a short amount of time, Bamlet said. “It was a lot of ball, but it was an opportunity I was going to have once in a lifetime.”

Bamlet will continue her softball career at Coe College in Cedar Rapids, Iowa next season.

“It’s a big step, but I’m excited for the opportunity,” Bamlet said. “I hope that a few of my Legion teammates get the opportunity to play in college in the future as well.”

Starting  Legion softball in Minnesota was made possible thanks to those who put in the time and effort. Bamlet specifically thanked Luann McMahn, who is a member of the fastpitch softball committee and a member of Adams Post 146, Mike Arvidson, the chairperson of the Minnesota Legion Softball Committee and his daughter Taya Arvidson, who pushed to make Legion softball happen.