Birds of a new feather: Cardinals turn to a different QB 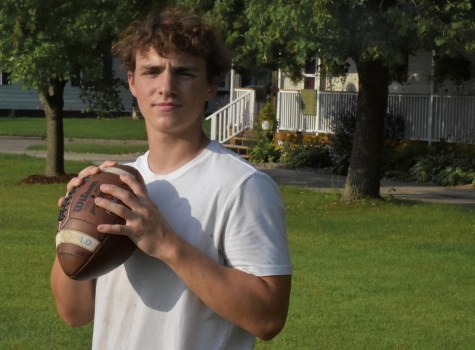 After playing wide receiver last season, Layne Bird is taking on the role of quarterback for the Cardinals this season. Rocky Hulne/sports@austindailyherald.com 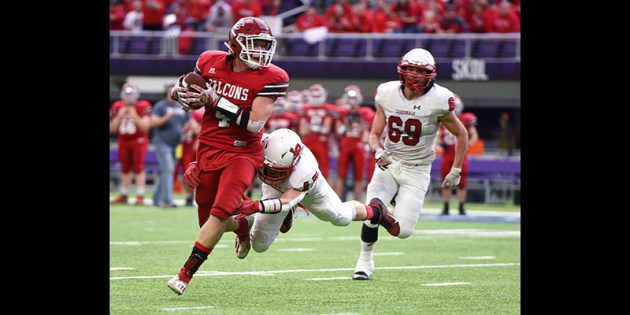 LeRoy-Ostrander's Layne Bird lays out for the tackle on Fertile-Beltrami's Everett Balstad in the Nine Man Prep Bowl at US Bank Stadium. Herald File Photo

LEROY – The LeRoy-Ostrander Cardinals football team is coming off its best season in school history, but many of the key players from that state championship squad are now off to college.

While the change is real, Cardinals are not panicking – they’re adapting. They’ve moved former wide receiver Layne Bird to quarterback and he’ll have a top flight go-to receiver in Tristan Lewison, who hauled in 12 TDs last season.

Bird played quarterback in junior high and JV and he’s ready to lead the way for an L-O team that is looking to stay competitive in the world of nine man football.

“It’s been different going from last year with all of those seniors and not being a leader, to now being a leader,” Bird said. “It’s a good change. I learned a lot from Chase (Johnson) last year. He taught me a lot, especially about lifting.”

Johnson was a big part of an L-O senior class that took the program to new heights and Bird isn’t being asked to replicate him. However, the expectations have not been dropped either.

“There is something special about Layne too. He’s got a lot of wiggle and he’s got great arm,” head coach Trevor Carrier said. “He’s got that second baseman’s release and it’s effective. He’s not going to be Chase Johnson, who was special. But we’re going to keep everything the same.”

Lewison sees a lot of Johnson in Bird and he’s excited to see what the new look Cardinal offense can do this season. He’s prepared for all possibilities, including the prospect of teams putting a safety over the top of him.

“I’ve heard talk of people trying to double me, but if that’s their plan, we have other options,” Lewison said. “I’m not the only person on the team and we’ll be fine.”

L-O will also bring back running back Lucas Roe, who was injured in last year’s season opener, and much of its receiving core.

Carrier said the celebration from last year is over and it’s up to this year’s team to keep the victories piling up.

“We’re pretty dangerous and we’ve got a big, strong line,” Carrier said. “We’ve got a lot of faith in what we’ve done here. The excitement here is real. Not everybody gets a chance to win a state title and that was in 2021. This is a completely different team, but the goals remain the same.”