Austin’s Garcia is setting lofty goals for his soccer career 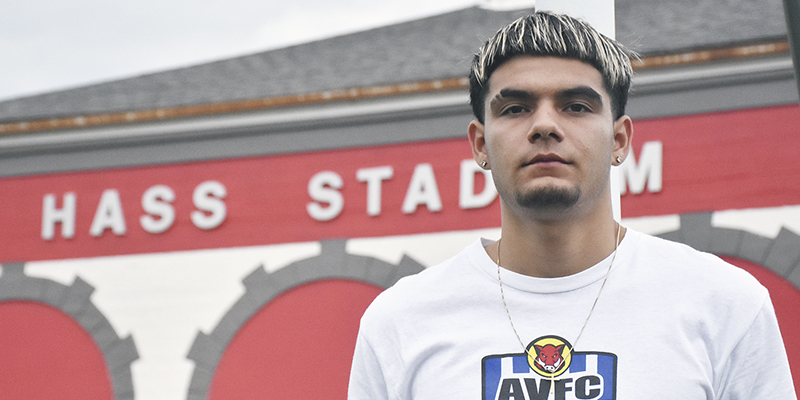 Austin grad Andres Garcia has had a big summer on the soccer pitch. Rocky Hulne/sports@austindailyherlad.com

After becoming just the second Packer to play soccer with a college scholarship, he now has his sights set on playing for much longer at an even higher level.

Garcia, who plays at Division II St. Cloud State University, spent his summer finding the best competition he could go against and he proved that he belonged every step of the way. He scored six goals in four games with Austin Villa FC, and he scored 10 goals in 12 games with Med City, where he was selected to the NPSL North All-Conference Team and he was selected for the NPSL 2022 All-Region team.

But the highlight of Garcia’s summer did not come in a game. It came when he was invited to scrimmage and practice with the Minnesota United’s second team in Blaine. The team, which offers professional players, an opportunity to crack the MSL and play for Minnesota United FC.

Garcia scrimmaged with the team and spent a week practicing with them.

“Practicing with pros has given me more motivation. I feel I can compete with them. This could actually be something real. I’m just going to keep going,” Garcia said. “It was a great experience. I was getting used to the change of pace on the first day, and by the second day I was already in it. The third and fourth days were me just playing my game. It was a lot of fun.”

Garcia has wanted to be a pro soccer player ever since he was a little kid, but now he’s starting to see a path forward to his ultimate goal. He still has three years left with the Huskies, but Garcia’s former teammate and current Minnesota United second team player Emman Iwe told him that Garcia is being watched by the team and he has to continue to play hard to get his chance.

Garcia has also dealt with a position change as he is moving from midfielder to striker.

“I’ve been opening my body more to get into position to score,” Garcia said.

Chasing the dream of being a pro is not something that Garcia has taken lightly. After earning all-state honors and playing in two state tournaments with the Packers, Garcia has kept his work ethic high and his doubts low.

“I’ve had to learn to eat right, take care of my body and I’m looking to get bigger, faster and stronger,” Garcia said. “I’m trying to do everything I can to get there.”

Playing against top competition this summer has pushed Garcia’s focus to a new level. He now knows what it will take to achieve his lifelong dream.

“Everyone’s (pro) for a reason and they’re playing at a high level. Only a few players get to play there and they push you to a higher level.” Garcia said.

Garcia scored eight goals in 16 games during his freshman season at St. Cloud State University, which went 4-13-1 overall in its first ever men’s soccer season.

The Huskies are hoping to take a big step this fall, when they open the season on Aug. 26 against South Dakota Mines in Husky Stadium.

“We’ve got some good guys coming in and hopefully we can do better than last year,” Garcia said. “I’m going to do whatever I can to help us.”