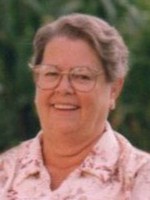 Anna May (Gorman) Schneberger was born on October 9, 1933, the daughter of Gerald and Rosalia (Elsbernd) Gorman in Austin, MN. Anna May attended the Queen of Angels Catholic Grade School and graduated from St. Augustine Catholic High School in 1951 in Austin, MN. Anna May met her future husband, Robert at a baseball game while she visited relatives in Festina, IA. They were married on June 4, 1952, at the Queen of Angels Catholic Church in Austin, MN; their wedding dance was held at the Inwood in Spillville, IA. They lived in & around the Festina area, where they raised their family of eight children. Anna May worked part-time at Ostranders Restaurant in Decorah, the Red Vest in Calmar, and drove school bus locally. Anna May returned to school to receive her nursing degrees: LPN and RN at Area One, Calmar and her BSN from Upper Iowa University in 1981. She worked at Schoitz Hospital in Waterloo, the New Hampton Hospital and at the West Union Hospital for twenty years, retiring in 1997. She was a Certified Diabetes Educator and a supervisor of the Cardiac Unit at the Palmer Lutheran Hospital in West Union. She served for two terms as president of the American Heart Association Chapter in West Union. In her younger years, Anna May enjoyed swimming, lifeguarding, and Girl Scouts. Her family brought her great joy and pride. She enjoyed music, dancing, camping, canoeing, fishing, traveling, sewing, reading, watching TV, gardening, cooking and canning. Anna May was a member of Our Lady of Seven Dolors Catholic Church.