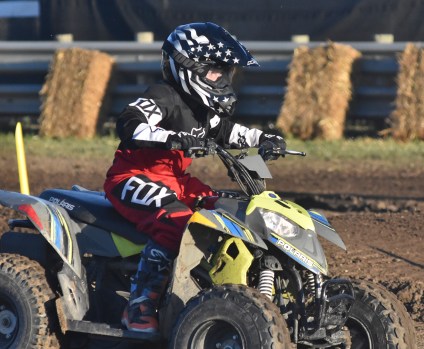 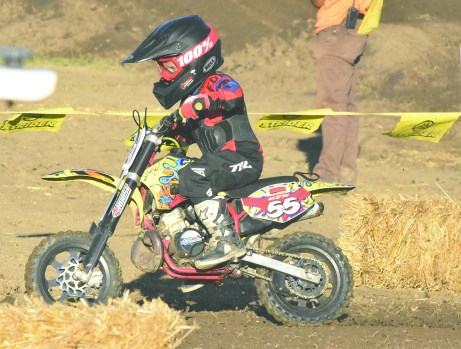 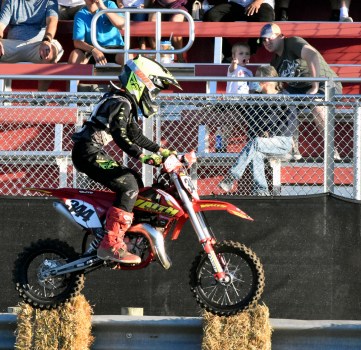 Tatum Swygman of Ostrander flies through a jump as a young fan looks on at the Mower County Fair. Rocky Hulne/sports@austindailyherald.com 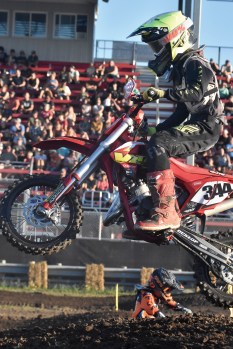 Tatum Swygman of Ostrander flies through a jump. Rocky Hulne/sports@austindailyherald.com 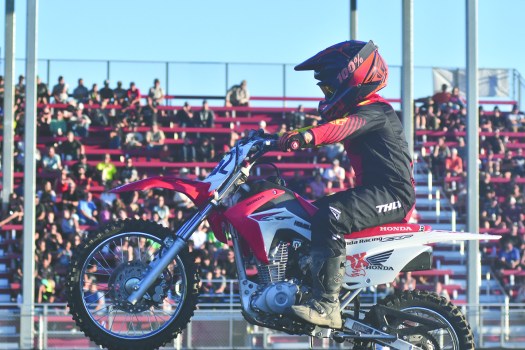 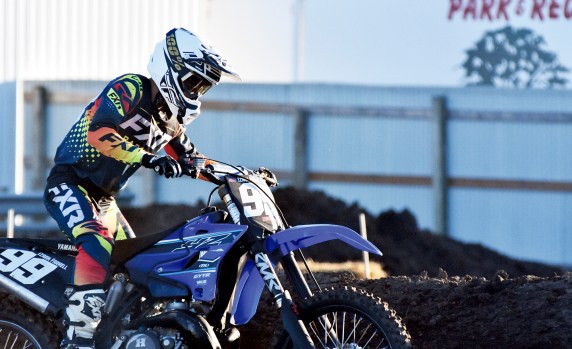 Izaak Farrell of Austin digs out of a hole at the Motokazie Supercross Series at the Mower County Fair Tuesday. Rocky Hulne/sports@austindailyherald.com 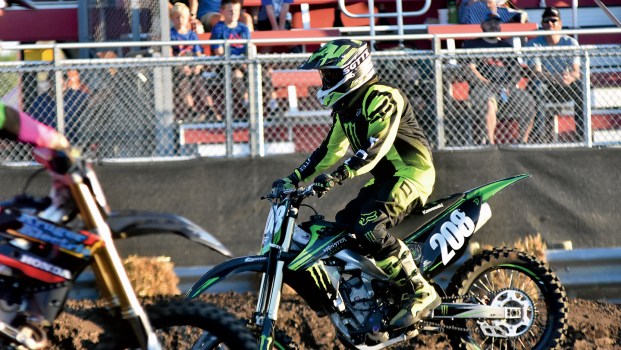 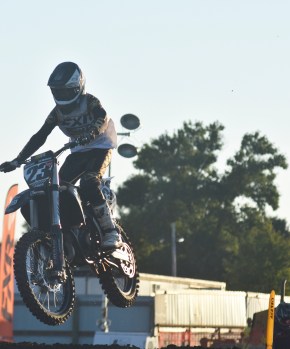 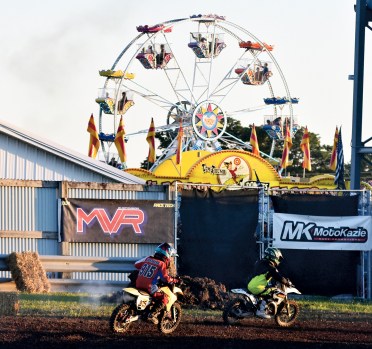 Riders cruise past the Ferris Wheel at the Motokazie at the Mower County Fair Tuesday. Rocky Hulne/sports@austindailyherald.com 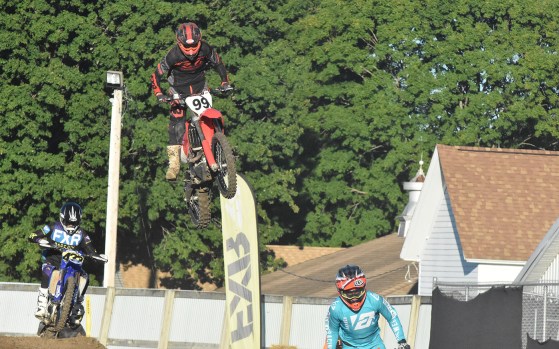 Riley Renner (99) of of Klemme, Iowa flies through a jump. Rocky Hulne/sports@austindailyherald.com

Scott Trimble is very familiar with the roar of dirt bikes at the Motokazie show at the Mower County Fair and he’s well aware of what it feels like to take a jump with the hope of a clean landing as hundreds of fans look on.

Trimble hasn’t ridden at the fair for two decades now, but he helped give plenty of Austin riders the chance to race as the co-owner of Trimble’s Cycles Center, the second oldest Honda dealer in the nation. Instead of riding, Trimble and his brother Jeff, now spend race nights fixing bikes and watching Austin kids take a shot at the race track.

“When you get the fair race, it’s great for kids to try it for the first time,” Trimble said. “If they like it, then they can go racing. I used to race here 20 years ago and it’s a good event. If you have a kid who’s around 15 and his dad is around 50, he’s going to race with his dad.”

Izaak Farrell, who was among the top riders at Motokazie on Tuesday, is one of the many Austin riders who has received a boost from Trimble’s.

“Trimble’s has definitely helped me a lot. I used to ride Honda, but now I’m on a Yamaha,” Farrell said. “They still help me out a lot with oil and I can order parts from there, even if I don’t ride a Honda. I’ve known them for about 10 years and Scott’s helped me out a lot. There’s quite a bit of guys from here that ride and it’s fun. Hopefully we can get a Trimble’s ride day soon at a track.”

Farrell has been racing since he was eight years old and the Motokazie at Mower County has always been one of his favorite races. Over the years, the 19-year old has risen to the B class.

“The competition gets a lot tougher the more you go up,” Farrell said. “My goal is to be pro someday. Maybe.”

Scott Trimble has followed motocross since 1974, and he has been working at the family shop for 47 years of its 68 years in business. His brother Jeff has been there for 55 years.

“We love motorcycles and we love riding them, but we don’t get much of a chance to do it because we’re always working,” Scott said. “It’s a great sport and people don’t realize how much muscle it takes.”

Jon Bain wasn’t the fastest rider at the Motokazie Supercross series at the Mower County Fair on Tuesday night, but he was one of the happiest.

The 58-year old Blooming Prairie man took great enjoyment in simply finishing the race in front of his family as he appreciates still being able to get on his bike and ride.

“I’m really enjoying it. I’m a little bit slower than I wanted to be, but I’m older,” Bain said. “It’s awesome. I’m glad that my family is here watching me. I feel great still being able to get on the bike. I’m pretty much the veteran out here.”

Bain, who moved to BP from California nine years ago, started racing in his teens and he raced well into his 20s until he became involved in the military. When he returned, he picked up racing again and he hasn’t stopped.

“Staying focused is important,” Bain said. “Focus on what you want and go as far as you want with it. It’s a good sport, it’s a hard sport, but it can take you places.”