A new challenge: With college athletics behind her, Austin’s Overby is still craving competition 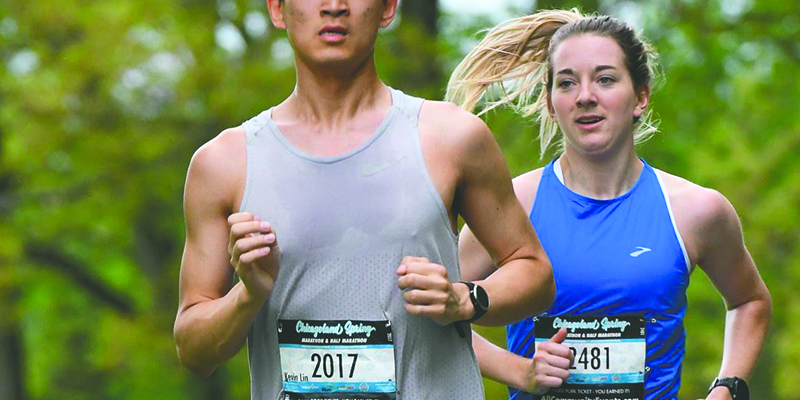 Austin grad Madison Overby competes in a marathon this past May. Photo provided

Madison Overby is no stranger to pushing herself, but the Austin grad and former University of North Dakota cross country and track and field standout has found a new way to push herself.

Overby is now taking on triathlons.

The run and the bicycling sessions are no problem for Overby, as she has trained in those areas quite often over the years, but the swim was another story. On her first day in the water, the former Division I athlete, who is now attending grad school for dentistry at Harvard University, found herself huffing and puffing.

“It was so humbling. It’s just night and day and it was so weird to pick up a new discipline after doing so well in another,” Overby said. “It was a whole other world and I was thinking ‘How do I not look dumb?” I wasn’t sure what to do, and I wasn’t even sure what to wear.”

Overby received swimming tutelage from former AHS swimmers Ben Walker, who completed an Ironman triathlon of his own recently, and Sam Clasen.

It was far from an effortless transition as Overby struggled to swim for five minutes straight when she first began swimming with a group of friends, who were casual swimmers, in Boston.

“Swimming was tough and I had to teach myself to swim competitively,” Overby said. “I worked on it for five or six days a week and after a month, it got better. I’m lucky that swimming is the least important discipline in a triathlon.”

After sharpening her skill set, Overby jumped into the world of triathlons by competing in a Half Ironman in Haines City, Florida.

“I was doing all three exercises at the time, so figured, why not try a triathlon? I suffered a stress fracture while training for my first tri, so my first ever triathlon ended up being a Half Ironman,” Overby said. “It was good, although I was planning to do a shorter one first.”

Overby ended up winning her age group and taking 10th overall in her first triathlon. She qualified for a big Half Ironman at St. George, Utah on Oct. 28.

Even without training for triathlons, Overby stays plenty busy. She is beginning her third year of a four-year dental program at Harvard University and she has days where she has school commitments from 7:30 a.m. to 9 p.m.

Overby is accustomed to waking up at 4:30 a.m. in order to make time for taking care of her body before she begins her day. Overby usually works out after her morning coffee or she’ll sometimes sneak in a quick session over her lunch break.

“It’s busy and it’s a lot, but it’s really nice to have something else that I can concentrate on besides school,” Overby said. “The nice part about training for a triathlon, is if you have a bad day on the bike, you can make up for it with a nice swim or run. It gives me a nice balance in life and I make sure that it’s a priority for me.”

Even after six trips to the Minnesota Class AA State Cross Country Meet as a Packer and a lot of success at the University of North Dakota, Overby still loves competing. But she’s satisfied with keeping it at her current level.

“I’m fine competing at the amateur level and I’m doing well with it,” Overby said. “If I wanted to compete at a higher level, I’d have to put in a lot more time. Right now it’s fun and I want to keep doing it for a while.”