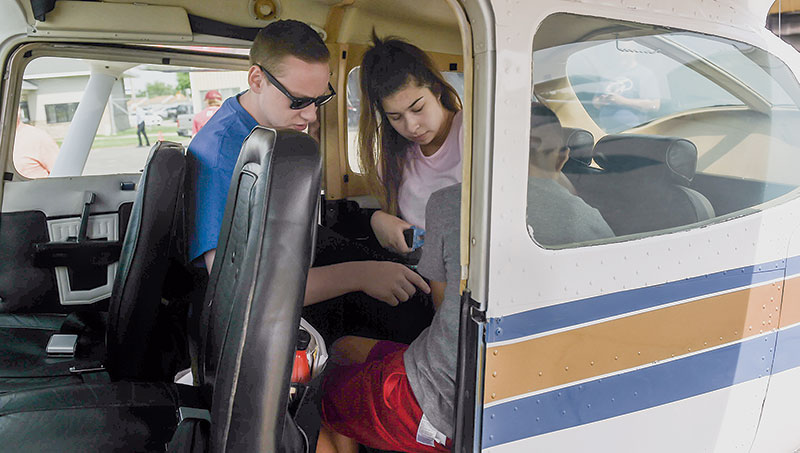 Justin Hansen helps with getting siblings Adamari and Sebastian Cruz buckled in for their flight during a past Young Eagles event. Herald file photo

Area young people ages 8-17 will have a chance to take to the skies on Saturday, Aug. 6th, as the Experimental Aircraft Association (EAA) Chapter No. 386 hosts a Young Eagles Flight Rally at Austin Municipal Airport (710 21st St. NE), Austin.

The rally is part of the EAA Young Eagles Program, which was created to interest young people in aviation.  Since the program was launched in 1992, Volunteer EAA pilots have flown more than two million young people who reside in more than 90 countries.

“Free airplane rides are just part of the Flight Rally,” said Tim Hansen, spokesman for the event.  “We hope to build one-to-one relationships between pilots and young people, giving a new generation a chance to learn more about the possibilities that exist in the world of aviation.”

Pilots at the event will also explain more about their airplanes allowing young people to discover how airplanes work and how pilots ensure safety is the prime concern before every flight.

Following the flight, each young person will receive a certificate making them an official Young Eagle. Their name will then be entered into the World’s Largest Logbook, which is on permanent display at the EAA Air Adventure Museum in Oshkosh, Wisconsin.  The Logbook is also accessible on the web at www.youngeagles.org.

Along with flight rallies, EAA members also fly Young Eagles on an individual basis.  Each pilot volunteers their time and aircraft so the flights can be provided free of charge for interested young people.

Those planning to attend the flight rally are asked to register their children at www.yeday.org/ before Aug. 6.  Flights will begin at 9 a.m. and close at noon. Each Young Eagle should be accompanied by a parent or adult guardian. Additional information about EAA and the EAA Young Eagles program is available on the Internet. Access to EAA’s Home Page is available at www.eaa.org.  The Young Eagles web page is www.youngeagles.org.