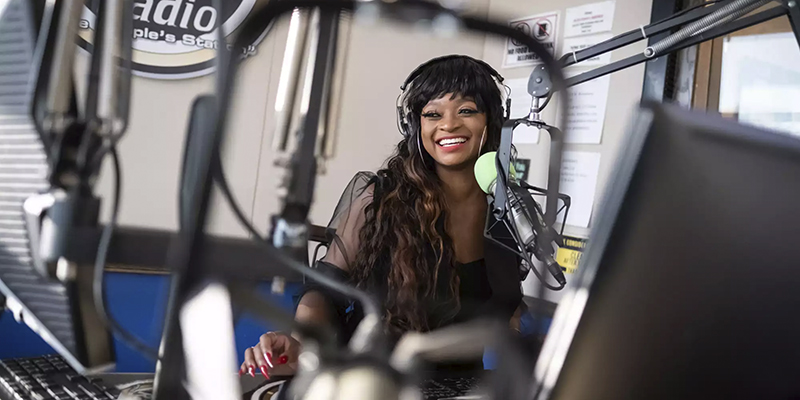 Chantel SinGs of Minneapolis co-hosts KMOJ’s The Morning Show with Freddie Bell (in the next studio) on May 27 in north Minneapolis. Caroline Yang for MPR News

Located in the heart of north Minneapolis on West Broadway in the Five Points Building, KMOJ would surprise any bicentennial time travelers who knew it as a barely-there operation spread between two apartments in the Glenwood Projects. It crept onto local airwaves with a budget of less than $50,000. Sometimes records would skip on-air after someone stomped on the floor.

Founded in 1976 by the Center for Communications and Development, KMOJ was originally WMOJ because FCC naming conventions assigned W call letters to station transmitters east of the Mississippi River.  Its transmitting power was 10 milliwatts — a range of four to six blocks — and its operating budget came courtesy of grants from the Lutheran Church and state of Minnesota. It became KMOJ in 1978.

Today, according to its management, KMOJ is a million-dollar business, which would be an astronomical sum for a community station just starting out 46 years ago. But, it’s on the low-end for a contemporary broadcaster.

Regardless of how much money the station has in the bank, the mission remains the same, to: “Teach communities of color media skills that help reinstate the positive affirmative Black image.”

KMOJ’s morning show co-host, Chantel SinGs, says she knows that the message of positivity is reaching its desired audience.

She’s reminded daily of the power of a Black-run radio station for a Black community.

“I had a caller that called me, crying,” she said. “She was crying and talking about the events that happened in Buffalo, New York, where 10 African Americans were shot and killed by a white supremacist shooter.

“She said that it affected her so badly, she couldn’t get through her workday.

“She’s sitting in her car, crying at 7:30 in the morning. She can’t go into her workplace. She’s thinking she needs some words of encouragement. Some kind of guidance. And, she calls KMOJ.”

“If we do the right things. If we focus on the mission — number one, to train broadcasters and number two, to provide for the needs of our listeners — we can’t lose,” he said. “And, as best as I can tell, we’re doing a wonderful job of staying true to our mission.”

After more than 40 years working at the station, Walter “Q” Bear Banks is a true believer.

Banks is the station’s afternoon drive time on-air personality. He’s a tall, powerfully built man with a smile that rivals the 1,400 watts of the station’s transmitter. He possesses an encyclopedic knowledge of the north side, the Minneapolis Sound, Prince and Jimmy Jam and Terry Lewis and all matters related to KMOJ.

“There’s a lot to radio, but even in the processing of everything that’s there, you have to have an understanding of self and community when it comes to KMOJ radio,” he said, “because that’s what its purpose is about. If you are not looking into the community side, then there’s no sense in being there.”

Motown legend Marvin Gaye had a hit song in 1972 called “Trouble Man” four years before the station was founded.

There have been eras in the station’s history when it felt like Gaye wrote it with KMOJ in mind.

In 1983, the station’s founding management team, General Manager Jeanette Cotton and development officer Brian Allen, were fired by the station’s board and barred from entering the building. The pair countersued for wrongful termination.

There have been several instances when staff or taxes weren’t paid. The station went silent for a short time in 1988 because of transmitter issues.  In 2016 a group named Concerned Citizens of KMOJ accused the board of putting the station at risk.

Reverend Ewald “Joe” Bash was a liaison for the Lutheran Church’s grant, which effectively created the station. In 1978, he told the media that WMOJ and its target audience had their work cut out for them.

“Realistically, we’re an awfully long way from doing what needs to be done in the Cities,” he said. “How do you undo the damage of whole lifetimes of being put down, of being denied jobs on one hand and being punished for being out of work on the other, of hate, hurt and hostility?”

An act of faith

Today, visitors see few signs of those past hardships. They walk into a tasteful suite of offices and studios with muted tan carpets and deep red and blue walls. The effect is professional, soothing. The gold and black KMOJ logo, shaped like the medallion of a 90s era rapper, dominates the main studio and imparts a slight bit of hip hop edginess.

Bell, who also serves as Chantel SinGs morning co-host, wants to push the station’s financial troubles even deeper into the past.

On a whiteboard in his office, he’s written a multi-million-dollar figure in black marker — a year-long stretch goal for his six-person management team.

Behind his desk, an ancient Philco radio, shiny and wooden, shares space with a montage of photos of his daughter who recently graduated from college with a degree in communications.

Bell is so immersed in the medium he might as well emit radio waves. He is the latest in a line of roughly a dozen KMOJ station managers, reaching back to co-founder Jeannette Cotton, responsible for leading the station to its current state of relative solvency.

Bell knew the station’s humble history when he was hired in 2016. Still, he left a well-paying job with a white-owned commercial station when KMOJ’s board of directors hit an impasse with its station manager.

Bell’s move was an act of faith. He felt indebted to KMOJ because his volunteer service there led to a commercial radio position. He quit his job and came on board as General Manager.  A few of his predecessors worked without pay for stretches of time, just to ensure the station kept going.

The station’s financial situation was so tenuous when Bell took over that he kept a resignation letter at the ready, just in case.

KMOJ’s financial struggles and deep connection to its audience is part of a rich tradition. Black radio stations girded the success of the Civil Rights Movement. They were the town criers calling listeners to rallies and protests. DJs in Deep South states like Alabama broadcast coded messages to alert their audiences about locations for protests, times and police presence — reminiscent of the old negro spirituals that helped slaves plot their escapes.

That’s the legacy upheld by KMOJ and a scant 43 other Black-run public radio stations across the U.S.

“It’s a market that’s hanging on by a string,” says Paul Billings, founder and president of WUVS, 103.7 The Beat, a Black-run public radio station in Muskegon, Michigan.

“[From] the government and on the corporate side, Black radio has always been the stepchild when it comes to advertising and underwriting dollars  … there’s never really been a strong advocacy there.”

Black radio stations, both commercial and public, are fragile unicorns. Black-owned commercial stations make up a little more than one percent of the nation’s 11,000 radio stations. The number of Black-owned stations reached a high of more than 250 stations, thanks to the FCC’s Minority Ownership Policy of 1978. However, Clinton era deregulation dropped the number to fewer than 180.

Billings says there is little political appetite to level the playing field for Black-run stations, either commercial or public. Advertisers call the shots in the radio business. Their purchases ultimately decide which audiences are worth the billions spent in radio advertising each year. A typical strategy for media buyers, he says, is to assume they can reach enough of the Black audience through ad buys with white-owned media.

Billings says it’s a reality Black stations want to change, but accept for the present. It’s a matter of survival.

Job one, Bell said, is to bolster the community-focused mission and keep the station alive, no matter the distractions.

“I didn’t want to be the guy [with] the headline, ‘KMOJ fails because of Freddie Bell.’ Nobody wants to see that. Nobody wants that to happen under their watch. I was determined that wasn’t going to happen.

Bell says the station’s latest, greatest achievement is melded to its mission of training young people of color. The Ice, touted as Minnesota’s first urban hip hop station, is broadcast on its KMOJ HD2 channel. It offers young, hip hop DJs a nerve-wracking training ground which includes  tens of thousands of listeners.

“Oh, this is live,” said a staff person when asked if trainees ever made mistakes on the expensive and complex soundboard. “They’ll make mistakes, but they won’t do it twice.”

Bell is particularly proud of the journalism training a diverse group of young women received under the Racial Reckoning: The Arc of Justice initiative. The project is a 10-month joint effort of KMOJ, AMPERS and the Minnesota Humanities Center that reached a million listeners. Its five young journalists covered high-profile, breaking news stories such as the trial of Derek Chauvin, the Minneapolis police officer who killed George Floyd.

One of those young reporters, Chioma Uwagwu, shared her thoughts about the project on the station’s website.

Uwagwu considers the project a solid step into a journalistic future that considers communities of color full partners in the news gathering process.

Bell’s pride in the project’s success may be due in part to the fact that KMOJ had no journalists on staff when he began his tenure.

“All this happens and we didn’t have a news department,” he said. “People were calling us, asking for reports. We didn’t have a reporter. It was just us. I sent one of my producers, who wasn’t a trained journalist, to the scene [of the protests following Clark’s death].”

That kind of privation is business as usual for Black radio stations, Billings said. Without sufficient funding, the stations have to be creative in most areas, including news gathering.

But, the landscape has changed since 2016 for both Billings’ station WUVS and for KMOJ.

“It’s because of [Bell] and his leadership that we have Black news that’s running on not only on our station, but on other stations across the country because he advocated for us to get this Black news for free,” Billings said.   “We have collaborated on talk shows, special editions, documentaries and those have made each one of our [stations] stronger.”

KMOJ, with its sprawling, joyous, messy, under-appreciated history is still standing and Billings doesn’t mind if you put your hands together for that small miracle.

“I think the community should be grateful that they have a voice, a vehicle that cares about their community that’s been independent, not bought-out and has put the citizens, the listeners, first for four-plus decades,” he said.

“They should be happy that this radio station is still there, still dedicated to the same mission that they had when they started off: to empower the Black community of the Twin Cities. That’s a strong commitment that KMOJ has given the people of Minneapolis-St. Paul. And, I hope that the people of that community have given KMOJ the same commitment.