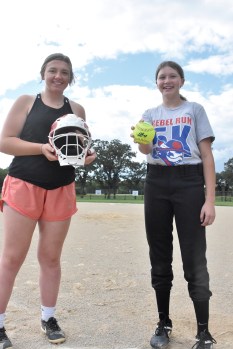 From left, Olivia Matheis and Laney Weis and the Adams softball team will play in the Legion state tournament this weekend. Rocky Hulne/sports@austindailyherald.com 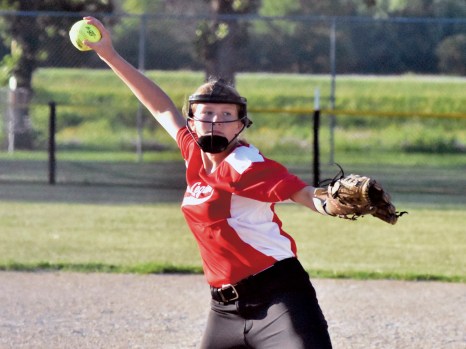 ROSE CREEK – Laney Weis may be celebrating her 13th birthday on Friday, but she’s already helped bring a celebration to her hometown.

Weis, who will be an eighth grader at Southland this fall, serves as the top pitcher for the Adams Post 146 Legion softball team and has helped the team get to state in the first ever season of Minnesota Legion softball.

“I’ve gotten quite a bit better this summer. I’ve worked on all of my different pitches and it’s gotten better,” Weis said. “The seniors have helped me with everything. From practice to games, they’ve given me tips. My nerves have gotten better over time.”

Weis started taking softball seriously three years ago and she’s been in the circle year round ever since. She’s had workouts with her grandpa and she’s played dome ball in the winter.

Weis has earned her time to play with the older girls as she was Southland’s No. 1 pitcher during the Section 1A Tournament this past spring.

“Laney is a hard worker and she’s at it non-stop,” Adams head coach Jordan Heimer said. “We have a lot of great leadership. The seniors welcomed Laney right away. They know she’s going to help them win and she’s settled right in.”

Adams has four seniors playing this summer and catcher Olivia Matheis has served as a strong mentor to Weis behind the plate.

“I love it. Laney does so well and she hardly needs me,” Matheis said. “She does the hard part.”

It is the first time a girls team from the Adams area has gone to state since the Southland girls basketball team went in 1999. The Southland softball team last went to state in 1995 and the most recent state qualifier for the Rebels was the baseball team in 2010.

“We’re just continuing on from what we did during school ball,” Heimer said. “Four of our five seniors played this summer and Laney has been pitching great. Our freshman class is really picking it up too and they’ve filled a lot of spots.”

The inaugural Legion Softball Tournament will be held in Mankato at Jaycee Park Saturday and Sunday. Matheis said it is exciting to be part of the first ever state Legion softball tournament.

“ I’ve never gone past the third round in the playoffs before,” she said. “I’m honored to be part of the first Legion tournament and this is the final hurrah for us seniors. It kind of hit me that I have three games of softball left, but I’m really happy to end it where we are.”

The eight-team tournament will wrap up with a state title game at 1 p.m. Sunday.

All games will be live-streamed on YouTube through Minnesota Legion Softball.

All competing teams are guaranteed three games at state.