StarWatch: Planets strung out in a line 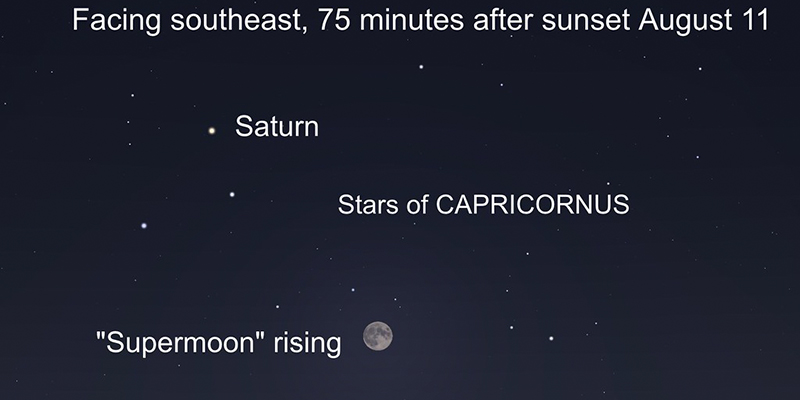 In the predawn sky, four planets—Venus, Mars, Jupiter and Saturn—are still strung in that order from left to right. But now the line of planets stretches all the way across the sky.

Venus dazzles from low in the northeast. Mars and Jupiter begin the month well up in the southeast and south, respectively, with Saturn lower in the southwest. As August goes by, Jupiter and Saturn drift westward; at month’s end, Saturn will be so far west that it sets before Venus appears. On the 14th, Earth laps Saturn in the orbital race. On that day Saturn will be almost exactly opposite the sun in the sky, so it will shine all night. 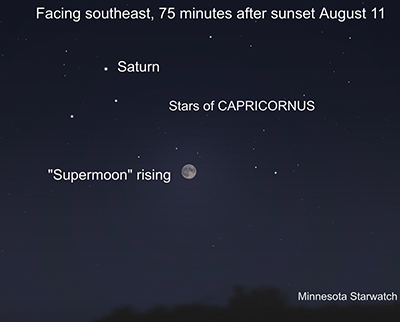 On the evening of the 11th, we get to watch another “supermoon” rise. It will not only be much closer to Earth, and brighter, than usual, but also about as round as it gets, since perfect fullness occurs close to the time of moonrise. Saturn accompanies this gorgeous moon across the night sky, while Jupiter does the honors the night of the 14th. On the morning of the 19th, a last quarter moon appears between Mars and the Pleiades star cluster. And on the 25th, Venus rises below an aging crescent moon—that will be lovely.

In the second half of the month, we’ll have at least an hour of moon-free star watching after nightfall. Start in the west with brilliant Arcturus, the anchor of kite-shaped Bootes, the herdsman. Hanging slightly to the east of Bootes is the semicircular Corona Borealis, or northern crown; its jewel is called Gemma or Alphecca. Next comes an hourglass of stars marking the upside-down torso of Hercules. And just beyond Hercules shines the large Summer Triangle of stars. Vega, the brightest of the three, dominates the constellation Lyra, the lyre, and rivals Arcturus in brilliance.

This year’s Perseid meteor shower is predicted to peak in the predawn hours of the 12th or 13th. However, the moon will wash out all but the brightest meteors.