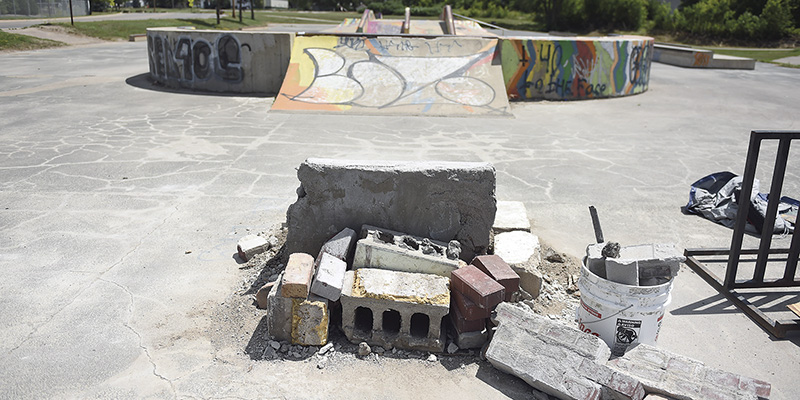 A ramp added to the skate park in Austin will have to be removed, but at the same time it has prompted a conversation looking into how the park can be brought up to date and made safer. Eric Johnson/photodesk@austindailyherald.com

In a meeting Wednesday night with members of the skater community, new Austin Parks, Recreation and Forestry Director Dave Merrill is hoping that a joint effort can help restore Austin’s skate park to what it used to be.

A broad range of skateboarding enthusiasts took Merrill on a tour of Austin’s skate park, pointing out areas of chipped concrete, cracks and worn rails that are presenting safety concerns for skaters. 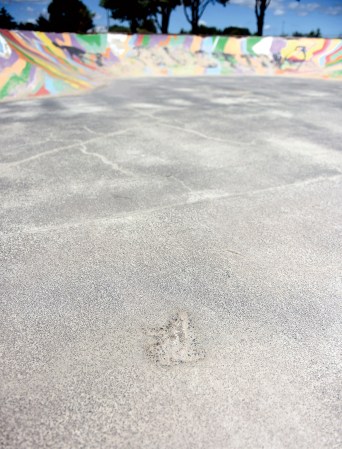 A missing chuck of cement at the skate park in Austin is just one of the concerns skaters have around safety at the park and part of a larger conversation to improve the park as a whole. Eric Johnson/photodesk@austindailyherald.com

“The biggest thing is the safety concern,” said Caleb Overby, who helped lead Merrill to areas of concern on many of the park’s facets. “There are chunks falling out of ramps, holes in the ground, cracks big enough for people to fall over. We’ve done our best to sweep the park up and make it a safe place for people to ride without falling. If you don’t know what you’re doing it’s a very unsafe place to be.”

Merrill noticed some of these concerns early in his tenure with the city when he was doing a tour of Austin’s parks.

At the same time, he was also made aware that some in the skater community had taken it upon themselves to try and improve the park by adding smaller concrete ramps without going to the city first.

And while Merill said they will have to be removed, he also recognized that there are concerns by skaters that need to be addressed.

“As a Parks and Rec professional, I look at it and go, ‘all right, that can’t be there,’” he said. “Other people can’t be building their own things. But my perspective of that is, if they are having to do that there’s a reason.”

Skaters using the skate park in Austin have taken to adding their own jumps and platforms, which will have to be removed, but at the same time has prompted a larger communication on how to improve the park and make it safer. Eric Johnson/photodesk@austindailyherald.com

Merrill told those at Wednesday’s night meeting that the two additions specifically will have to be removed, but at the same time he urged them to become part of the process in order to return the skate park to when it was brand new.

“They’re the experts,” Merrill said. “And what I would do as a rec professional if I was thinking about adding anything to our park systems — I would go to other places and see what other people are doing and talk to them. That’s what these guys do. They’ve been to dozens or more skate parks. They rattle off places that are good and places that aren’t. I would be a fool not to tap into that.”

The feeling is mutual as skaters expressed a similar urge to work with the greater community to not only create a safer park, but to continue offering a welcoming area for skaters, including those who are just getting into the activity.

“I would like to just see more community involvement,” said Dylan McFarland, another of the skaters pointing out problem areas Wednesday night. “I think it would make it more safe here. I feel like from not being here a lot, this place looks neglected … but it’s really not. It’s a nice place to skate.”

“Everybody here is open and getting more kids here, getting more people here, I feel like it will help it grow. Help kids stay out of trouble,” he continued. “We’re here every day after school. Come skate, have a good time.”

However, some of that good time is being dampened by vandals not associated with skating and that’s frustrating the skaters who do want more people coming to the park.

“A lot of frustration,” McFarland said. “I’ve brought wooden ramps, brooms, obstacles and within a week they are broken by people at night who come here and just break stuff. I feel like if they saw during the day time and with more people here to help, I definitely think the skate park would be better.”

That is a big part of why Merrill thought Wednesday night’s meeting was important.

Even though it’s not necessarily a park unto itself, Merrill feels like it should be given the same attention as any other park in Austin.

Still, he cautioned those in attendance that big changes won’t be quick, but that smaller changes to the park can be made with relative ease.

“The first thing I want to do is make it safe, get rid of some of the stuff that shouldn’t be here and do the best modifications we can in the short term to make it safe and to start to show them that we are paying attention and that we are going to make changes here,” Merrill said. “The bigger stuff will come with some of the discussions we’ve had out here.”

Despite the need for patience, skaters felt good about this first step to continue on with a pastime they truly have a passion for in as safe of an environment as possible.

“I feel really positive with the way things have gone with the meeting,” Overby said. “I feel like for once we’ll get something done and I’m glad we had people outside of the skateboarding community show their support.”