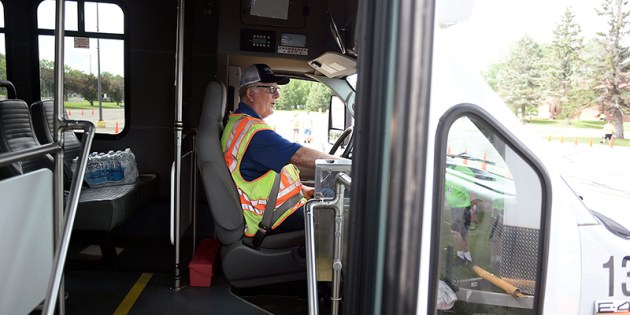 LeRoy Rentz checks the bus over as he prepares to go through the skills course as Saturday’s first drivers in the small bus divsion of the 35th annual Bus Roadeo held at Riverland Community College. Eric Johnson/photodesk@austindailyherald.com 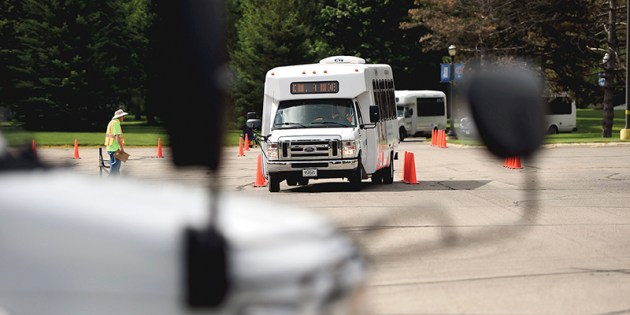 Drivers taking part in a skills course had the opportunity Saturday were part of the 35th annual Bus Roadeo held at Riverland Community College. Eric Johnson/photodesk@austindailyherald.com 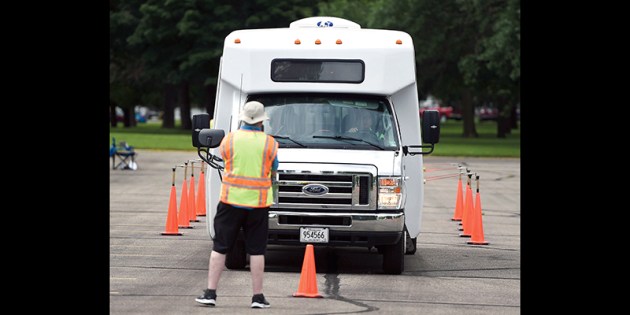 Heather Vinson comes to a stop during a speed portion of the course run Saturday during the 35th annual Bus Roadeo held at Riverland Community College. Eric Johnson/photodesk@austindailyherald.com 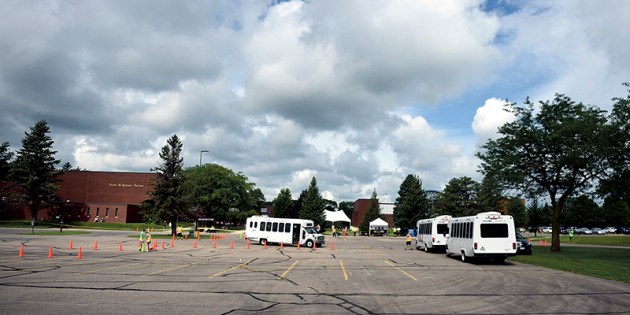 A bus runs through the course Saturday while other drivers wait for their turn during the 35th annual Bus Roadeo held at Riverland Community College. Eric Johnson/photodesk@austindailyherald.co 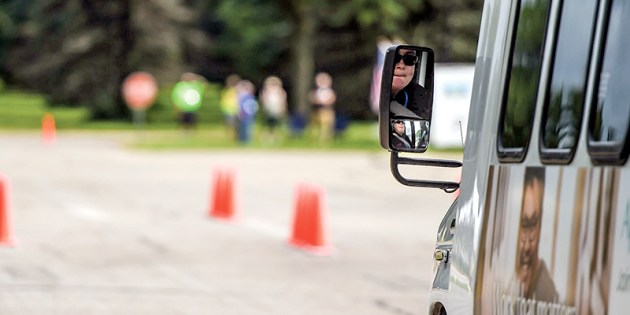 Stacey Stanek looks into the rearview mirror as she runs through a training course, part of the 35th annual Bus Roadeo Saturday held at Riverland Community College. Eric Johnson/photodesk@austindailyherald.com 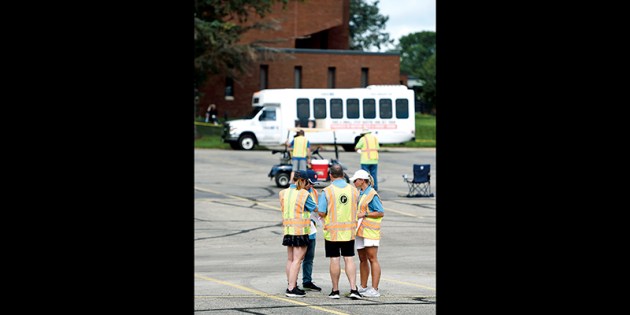 Judges confir as another driver takes to the course Saturday during the 35th annual Bus Roadeo at Riverland Community College. Eric Johnson/photodesk@austindailyherald.com

Over 30 participants came to Austin this past weekend for the 35th annual Minnesota State Bus Roadeo, which took place at Riverland Community College.

According to SMART Transit Director Kirk Kuchera, the event, which has returned to the region for the first time since 2008, was a big success for the community as well as the transit company.

“On the surface it went great,” Kuchera said. “We got a lot of compliments on just how smooth everything went and how everything was set up the way things needed to be.”

In total, about 35 transit drivers from around the state came to Austin over the two days of the event with the competition aspect taking place throughout the day Saturday in both large and small bus divisions.

Kuchera said that the number of drivers competing this year was a good indication of how anticipated the event was.

“It’s a tad higher than last year’s number,” he said. “We were pleased.”

As a topping on the cake, SMART drivers brought home some hardware from the competition.

The competition takes place at different locations every year, however, the last time it was even close to Austin was that 2008 year when it was hosted by Albert Lea Transit in Albert Lea, before SMART Transit had been established.

Transit drivers took part in a variety of competition and training throughout the day Saturday, including a large skills course in the east parking lot of the East Campus.

However, what really stands out is just how many facets there are to the weekend.

“There’s an education and a training component to the event,” Kuchera said. “It gets drivers to focus on the skills they need to use every day. There’s also a big camaraderie piece for the drivers. They connect, hear stories and share experiences with one another.”

It’s through that camaraderie, Kuchera said, that the world of transit transportation can be further highlighted.

It’s a chance to open the world to the wider public that may not understand all that goes into public transportation.

“I would say for the driver, it’s really important because it allows them to come together,” Kuchera said. “As for us, as an agency or the State of Minnesota, we really want to highlight the work public transit drivers do day in and day out.”

“There were a lot of people that were asking questions on Facebook,” he added.

That attention could have dividends for SMART Transit and other businesses down the stretch. Kuchera said that SMART is still facing challenges from the COVID-19 pandemic, with ridership being down about 25% from where they were before the pandemic.

However, some places are seeing numbers as low as 50% in ridership still.

And like many businesses, they are also dealing with a staff shortage, but to host an event like the Roadeo highlights a possible career path.

“Public transit can be a very rewarding career,” Kuchera said. “Our turnover rates are relatively low. They get a job like this, they stick with it. They’re making a difference in people’s lives.”