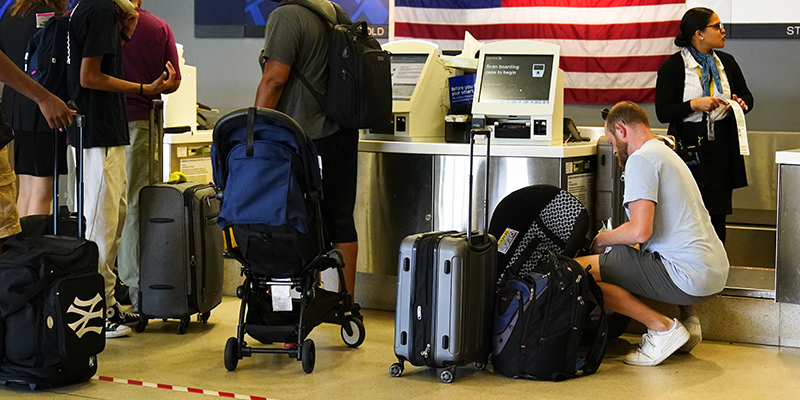 Travelers check in at the Philadelphia International Airport ahead of the Independence Day holiday weekend in Philadelphia, Friday, July 1, 2022. The July Fourth holiday weekend is off to a booming start with airport crowds crushing the numbers seen in 2019, before the pandemic. AP Photo/Matt Rourke

The July Fourth holiday weekend is off to a booming start with airport crowds crushing the numbers seen in 2019, before the pandemic.

Travelers seemed to be experiencing fewer delays and canceled flights Friday than they did earlier this week.

The Transportation Security Administration screened more than 2.4 million travelers at airport checkpoints on Thursday, 17% more than on the same Friday before July Fourth in 2019.

“We expect that (Friday) is going to be busy, of course, and then Sunday will be very busy,” TSA Administrator David Pekoske said on NBC’s “Today” show.

AAA predicts that nearly 48 million people will travel at least 50 miles or more from home over the weekend, slightly fewer than in 2019. AAA says car travel will set a record even with the national average price for gasoline hovering near $5.

Leisure travel has bounced back this year, and that means particularly big crowds over holidays.

With many flights sold out over the July Fourth weekend, airlines will struggle to find seats for passengers whose flights are canceled. Airlines advise customers to check their flight’s status before going to the airport.

If you’re already at the airport when your flight is canceled, “it’s time to flex your multitasking skills,” said Sebastian Modak, editor-at-large of travel guide publisher Lonely Planet. He advises heading straight to the airline’s help desk, checking its app on your phone, and calling the airline’s customer-service line — an international number might be answered sooner than a U.S. one for airlines that have both.

Modak said driving or taking the bus or train will often be a better option in the U.S. this summer.

“There’s no getting around the fact that this is going to be a summer of travel delays, cancelations, and frustrations,” he said.

While vacationers are crowing airports and roadside restaurants, business travel and international flying remain depressed, and the total number of people flying has not fully recovered to pre-pandemic levels. TSA screened 11% fewer people in June than it did in the same month of 2019.

Thursday marked the 11th time since the pandemic started that TSA checked more people than it did on the same day in 2019, and just the second time since February.

Airlines could almost surely be carrying more passengers if they had enough staffing. Many U.S. airlines have trimmed their summer schedules after bad weather, air-traffic delays and a lack of enough employees caused widespread cancellations over the Memorial Day weekend.

By mid-afternoon Friday on the East Coast, airlines had canceled more than 350 U.S. flights and another 3,700 were delayed. From June 22 through Wednesday at least 600 flights were canceled, and between 4,000 and 7,000 were delayed per day, according to tracking service FlightAware.