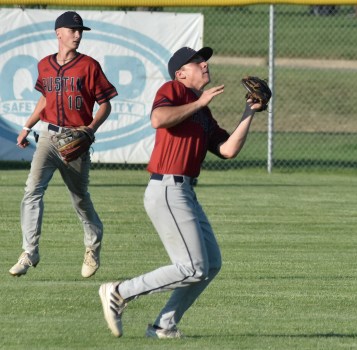 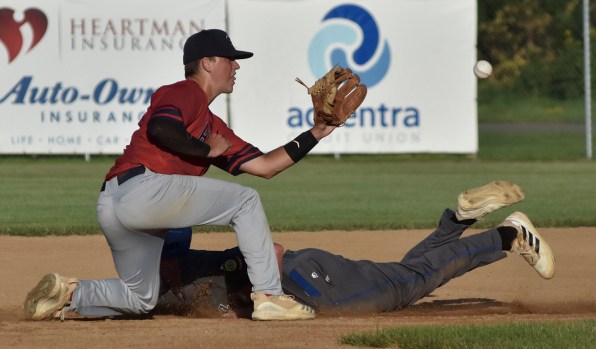 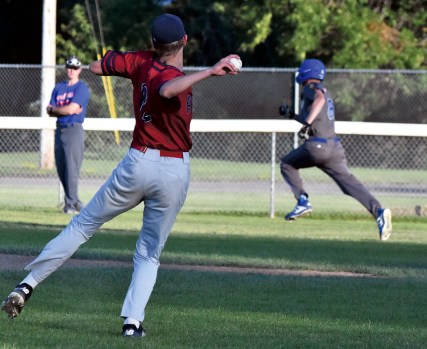 Austin’s Peyton Ransom looks to throw to first base after picking up a ground ball against Owatonna. Rocky Hulne/sports@austindailyherald.com 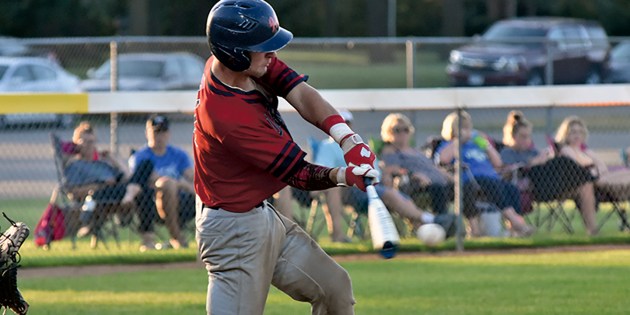 Austin third baseman Jerry Lillemon was having a rough day at the diamond early on, but he found a way to keep going as he played a crucial role in Post 91’s 5-4 walk-off victory in a District playoff opener for Austin in Marcusen Park Monday.

Lillemon, who committed two first inning errors, doubled to left field with two outs and came around and scored the game-winning run on a shot by Jake Truckenmiller that landed near the fence. He also made several dazzling plays at third after the first inning as he snared in a couple of scorching line drives.

“I was struggling earlier and I just had to go out and get a rally going,” Lillemon said of his final at bat. “My teammates picked me up (after the errors). I refocused and locked in and I just told myself that I had to get the next one.”

“There’s no better time to get that first hit, especially with a guy on and a chance to win it,” Truckenmiller said. “It was a good pitch to hit. It was a fastball right down the middle. I don’t know why he gave it to me, but he did.”

Owatonna’s Caleb Vereide was a thorn in Austin’s side as he blasted a two-run homer to left field to bring Owatonna to within 4-3 in the sixth and he singled in a run in the seventh to tie the game at 4-4. Owatonna’s lead-off hitter reached on an error to start the sixth after Austin pitcher Peyton Ransom had retired 12 of the previous 14 hitters.

Post 91 tied the game at 1-1 early when Dakota Retterath singled in a run in the bottom of the first and Austin took the lead in the third when Jake Truckenmiller drove in a run and Nick Robertson singled in a run to make it 3-1.

Cole Walter delivered a two-out RBI single to push the lead to 4-1 in the fourth.

Austin will now play either Winona or the Rochester Patriots in the next round of the Districts at 5 p.m. Wednesday. The remainder of the District Tournament will be held at Winona State University.

“We’ve got to get back in the cage and be ready for that game,” Truckenmiller said. “We’ve got to have less errors.”