Pillars of the Community announced 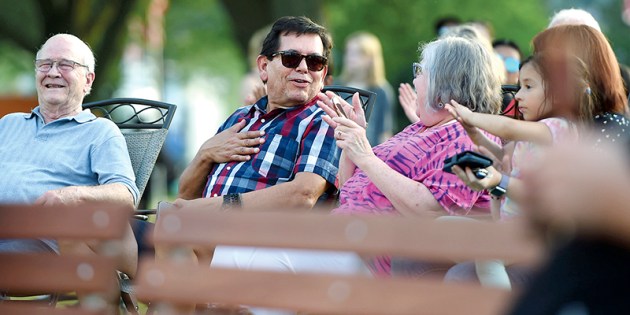 Miguel Garate reacts Monday night after it was announced that he was one of three inductees into the Pillars of the Community. Eric Johnson/photodesk@austindailyherald.com 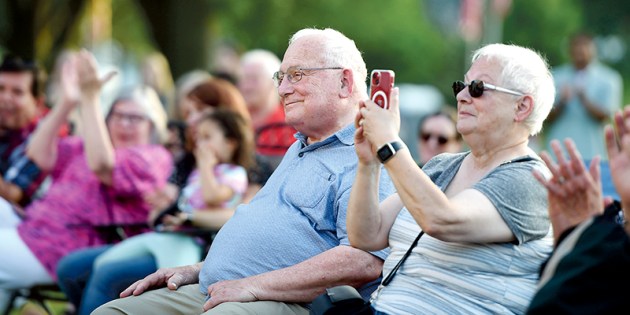 Michael Ruzek smiles as he is announced as being one of three new inductees to the Pillars of the Community Monday night during Freedom Fest. Eric Johnson/photodesk@austindailyherald.com 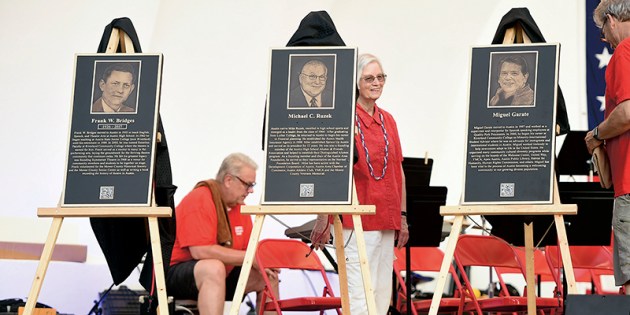 The unveiled plagues for the Pillars of the Community were unveiled MOnday night during the second day of the Freedom Fest.: They included Frank W. Bridges, Michael C. Ruzek and Miguel Garate. Eric Johnson/photodesk@austindailyherald.com

On Monday night, during the second day of Freedom Fest, three more names were added to the Pillars of the  City, including a theater icon, a towering figure in Austin’s multicultural world and a man who has been very active in the community.

Frank W. Bridges, Miguel Garate and Michael Ruzek were revealed Monday night during a ceremony at Bandshell Community Park as this year’s pillars.

The three plaques were unveiled Monday evening, prior to the Austin Community Band’s performance and the capstone fireworks display at Bandshell Park.

“It is very gratifying to be here in my hometown, celebrating the Fourth of July and receiving this honor,” Ruzek said when he was invited to the stage. “I’m always impressed with the citizens of Austin … people stepping up and making Austin a better place to live.”

Garate, for his part, accepted his honor by thanking a community that took him in as one of their own.

“I want to thank the people who welcomed me,” Garate said. “Don’t ever give up. This is a free country so go out and fight for it.”

This year’s pillars join the previous inductees before them and will have their plaques displayed on Main Street, next to Mill Pond.

Frank W. Bridges moved to Austin in 1955 to teach English, Speech, and Theatre Arts at Austin High School. In 1962 he began teaching at Austin State Junior College (now Riverland) until his retirement in 1989. In 2005, he was named Emeritus Faculty at Riverland Community College where the theater is named for him. Frank served as a mentor to many in the performing arts, laying the groundwork for the thriving theater community that continues today. He felt his greatest legacy was founding Summerset Theatre in 1968 as a venue for community members and students to be together on stage. Frank volunteered for the Mower County Historical Society and the Mower County Senior Center as well as writing a book recording the history of theatre in Austin.

Miguel Garate moved to Austin in 1997 and worked as a supervisor and interpreter for Spanish speaking employees at Quality Pork Processors. In 2000, he began his career at Riverland Community College as Minority-International Student Advisor where he was an advocate for immigrants and international students in Austin. Miguel worked tirelessly to help newcomers adapt to life in the United States. He organized many community cultural diversity programs while serving on the boards of the Welcome Center, United Way, YMCA, Apex Austin, Austin Public Library, Habitat for Humanity, Human Rights Commission, and others. Miguel has been vital to the process of Austin becoming a welcoming community to our growing diverse population.

Austin native Mike Ruzek, excelled in high school sports and emerged as a leader from the class of 1964.  After graduating from Luther College, he returned to Austin to begin his career in financial planning. He established the Austin Health Insurance Agency in 1998. Mike established Spruce Up Austin and served as its president for 12 years. He was also a founding member of the Austin High School Alumni & Friends Association and helped to establish their Distinguished Alumni program. As a founding member and chair of the Austin Area Foundation, he served as their representative on the Hormel Foundation Board.  Mike has been active with the Development Corporation of Austin, Austin Area Chamber of Commerce, Austin Athletic Club, YMCA and the Mower County Veterans Memorial.