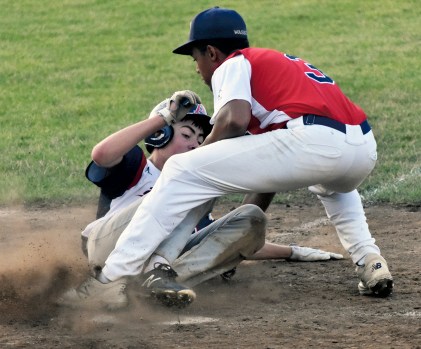 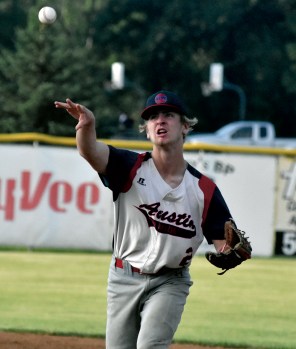 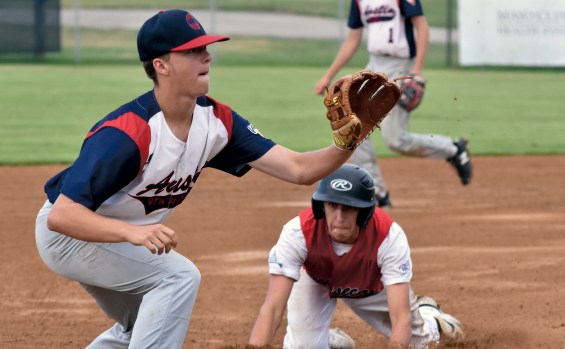 Austin’s Dane Schara looks in a throw at third base as a Waseca runners slides forward in Marcusen Park Friday. Rocky Hulne/sports@austindailyherald.com 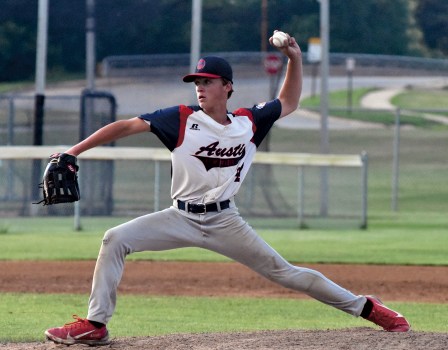 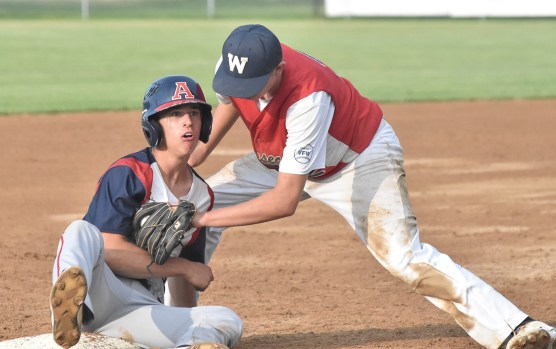 Austin’s Isaac Nelsen looks up after being called safe at third base against Waseca. Rocky Hulne/sports@austindailyherald.com

Peyton Ransom and the Austin Post 1216 VFW baseball team had to do a lot of waiting, but it all paid off for them in a 5-4 win over Waseca Friday.

Austin had to wait an hour and a half through a rain delay to start the game and it had to wait for four innings before it scored its first run of the game, but it closed things out in the final frame of the day.

It all came full circle when Ransom singled to start the bottom of the seventh. He stole second base, advanced to third on a throwing error and scored the game-winning run on a passed ball.

“We were going to fake a bunt and steal and it worked out perfectly,” Ransom said. “I knew the passed ball was coming eventually, so I was just looking for it and staying ready.”

Ransom also scored the pitching win in relief for Post 1216 as he didn’t allow a hit in three and two-thirds innings.

Austin had trailed 4-0 after four innings, but it put together a scrappy rally in the bottom of the sixth when it scored off an error, a wild pitch and fielder’s choice before Isaiah Conway knocked in the tying run with an RBI groundout.

“The comeback was huge. Sitting around for an hour and a half, helping with the field and then having to play a game is never an easy thing to do,” said Post 1216 head coach Zach Huntley. “But we’ve been a grind-it-out team this year. We get hits when we need to and we’ve had some good pitching performances late in the game.”

Landon Meyer went two-for-three at the top of the order for Post 1216. He said the team never gave up after starting slow.

“We had to find barrels. We were struggling with hitting the ball and we had to get it going,” Meyer said.

Austin (7-6 District) will open the Sub-District playoffs on the road next week, but it will host the state tournament in three weeks. Post 1216 is hoping to advance to Districts so it doesn’t have a lull in play before the big tournament.