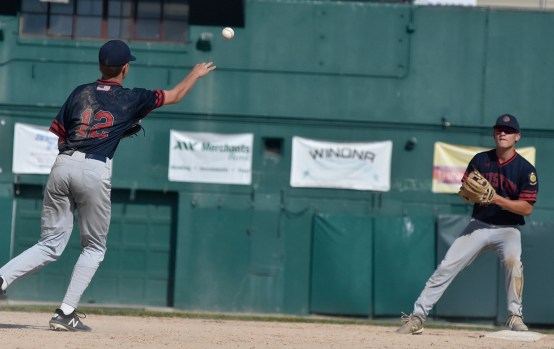 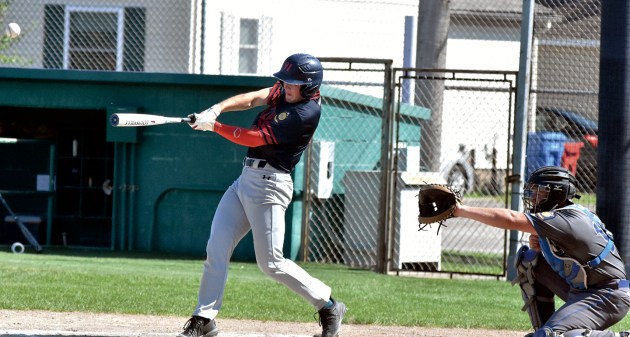 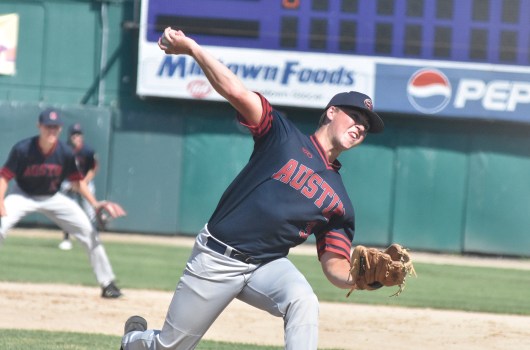 Dakota Retterath slides into second base in an attempt to break up a double play in Winona Friday. Rocky Hulne/sports@austindailyherald.com 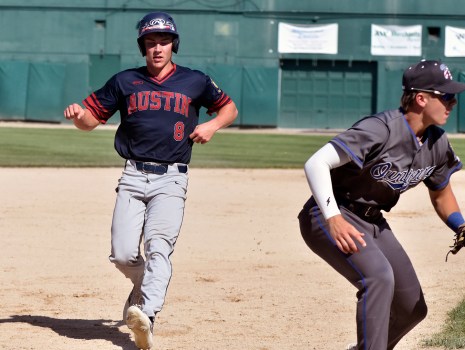 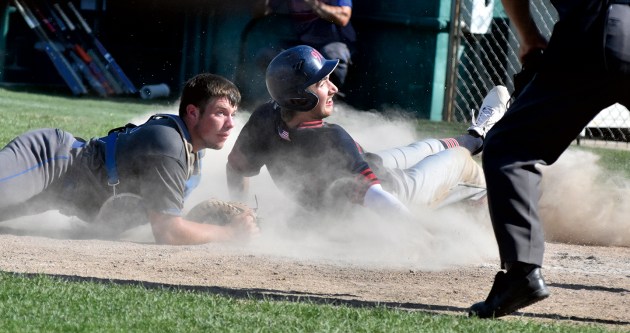 Austin’s Bray Klapperick looks up after being tagged out by Owatonna catcher Drew Kretlow in an Legion baseball elimination game in Winona Friday. Rocky Hulne/sports@austindailyherald.com

WINONA – The Austin Post 91 Legion baseball team was in prime position halfway through the game, but a very unorthodox double play and an Owatonna rally ended its season in an 11-3 loss in a District elimination game Friday.

Austin trailed 3-2 in the bottom of the fourth when it looked like Nick Robertson was about to tie the game with a no-out double to right field. Unfortunately for Austin, Bray Klapperick was thrown out at home plate and Robertson was thrown out trying to take third on the throw to home.

Instead of possibly taking the lead in the fourth, Post 91 went down in order and Owatonna used that momentum shift to score eight times off of seven hits in the top of the fifth. Austin used three separate pitchers during the Owatonna rally.

“That (double play) flipped things a lot,” Robertson said. “It brought down the vibe, it brought down our energy and then they had a big inning and the wheels kind of fell off.”

Austin led 1-0 after two innings after Jake Truckenmiller scored on an Owatonna throwing error, but Owatonna went up 3-1 when Matt Seykora slammed a three-run, two-out triple to center field.

While Cole Walter is usually limited to relief duty, he took the start for Post 91 and gave his team a chance through the first four innings.

“Cole did an outstanding job keeping us in the game early and then the tide changed direction,” Austin head coach Joe Ciola said. “It was a great season. They played with a lot of energy and they had great friendships. They cared a lot about the game and they had fun. We had a really good group of guys.”

Post 91 had to play four games in five days as it lost to Winona 1-0 on Wednesday, before beating Byron 12-2 in an elimination game on Thursday.

“We had to get a rest and we had to come out with energy in all of the games,” Robertson said. “We had a great season and a lot of fun.”