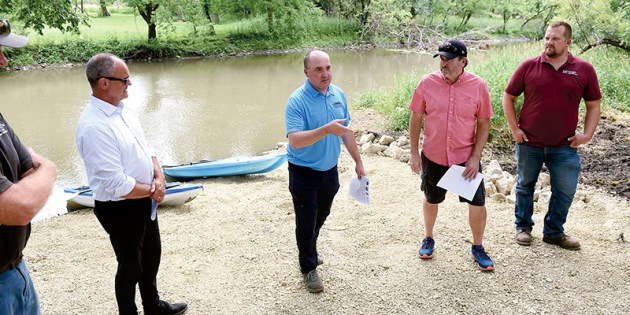 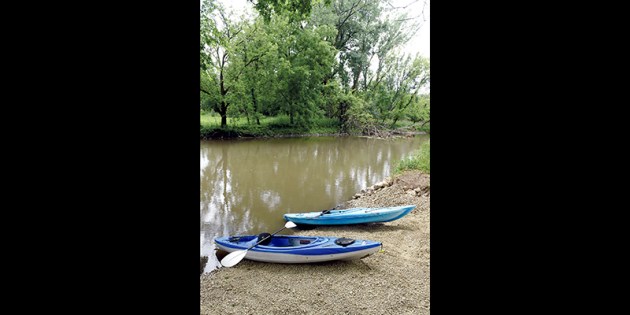 A pair of kayaks sit on the new access ramp to Turtle Creek, which was unveiled Tuesday afternoon just off of 12th Street SW. Eric Johnson/photodesk@austindailyherald.com 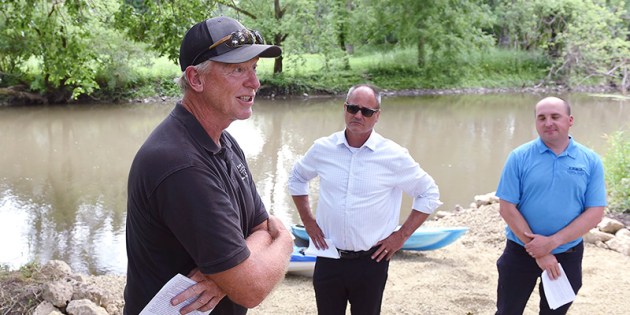 Jon Erichson, board member on the Turtle Creek Watershed District Board of Directors and frequent user of Turtle Creek talks about the paddle during an unveiling of a new access point to the creek. Eric Johnson/photodesk@austindailyherald.com

Outdoor enthusiasts have one more access to Austin’s waterways.

Officials on Tuesday afternoon unveiled a new access to the Turtle Creek for kayakers and canoers, located just off of 12th Street SW, behind Sacred Heart Care Center.

The project, which began two years ago, is the result of a multi-agency partnership to develop a walk-in access to the Turtle, that will allow people to connect downstream with the Cedar River or paddle upstream to enjoy the wooded hillsides on the city’s west side.

“We are constantly looking at ways to enhance the local waterways and connect the public to them, and this is a great, collaborative project toward those goals,” said Tim Ruzek, Cedar River Watershed District’s water plan and outreach coordinator.

Work and financing for the project came from various areas. The Turtle Creek Watershed District funded $2,750 for the access with the Austin Area Foundation awarding a $2,000 grant to the Cedar River Watershed District.

The City of Austin designed the access and delivered rock materials, while the Department of Natural Resources built the access on July 13.

“This opens up some options,” Ruzek said during a press conference at the new access. “You don’t have to just go down the Cedar River.”

From the city’s perspective, this is a way to highlight some hidden gems within the community.

The access is on a floodplain in Austin, which included residential property acquired by the City of Austin through its flood mitigation program. In total a home and two garages were removed from the 1.5 acre piece, which sits next to another half acre of wooded property owned by the city.

For many this is another effort to further get people out and using Austin’s waterways, which many believe is under utilized by a public who may not realize just how secluded a paddle down the rivers can be.

Erichson also said that establishing this access point could attract people from further north of Austin that can put in near Moscow or even Geneva.

“There were people looking for an outlet,” Erichson said. “Now people in Western Freeborn and northern Mower can come this direction.”

The access point is a slope of rock and gravel to the Turtle, and is expected to be easily maintained, even in the event of a flood event.

Future work surrounding the project will come in the form of signage that will direct people to the access from the busy thoroughfare of 12th Street SW.

“Anytime we can add more accessibility to our waterways should be celebrated, and the Austin Area Foundation is proud to have helped add this access for the community,” said AAF’ Board of Directors Chair Taggert Medgaarden.

A similar project five years ago opened up a rock-surfaced access behind Marcusen Park on the Cedar River Water Trail through Lafayette Park.