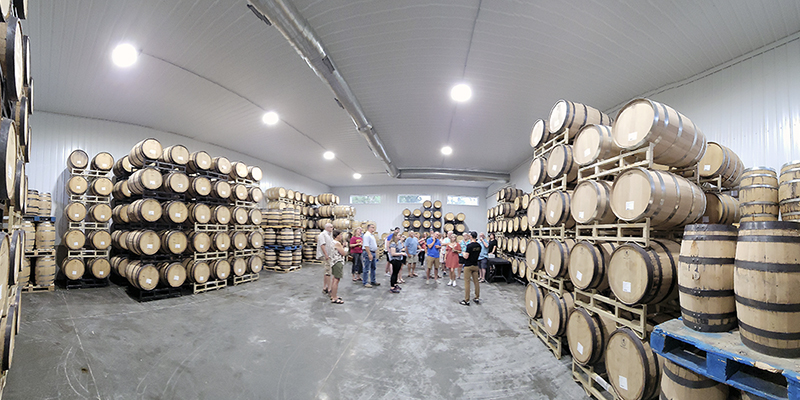 That’s the newly revealed name of the bourbon being distilled at the new distillery at Four Daughters Vineyard & Winery.

The winery held a grand opening this past weekend for the new distillery that was officially revealed earlier this year. However distilling actually started two years ago.

Tours were available throughout the weekend as well as a tasting of the two-year old bourbon, considered by owners and staff as a natural progression of what Four Daughters has been doing over the past 11 years.

This is especially true in that bourbon wasn’t initially in the plans, allowing the winery to develop and establish themselves as well as mature a versatility.

“I think it works out well,” said Gary Vogt, co-owner of Four Daughters along with his wife Vicky. “A lot of times distilleries will start up and they will rush the product out because they need income. We’ve got so many other things. We’ve got Loon Juice, we’ve got the event center, the wine. We didn’t have to rush.”

The flexibility Four Daughters enjoys is attributable to the fact that it had already established those things Vogt mentioned, letting it skip the step of developing gins and vodkas commonly used to drive revenue early in a distillery’s life.

“We could afford to be patient and make a good product and just concentrate on bourbon,” Vogt said, echoing the comments of Justin Osborne, head of Wine & Bourbon Operations at Four Daughters, in April.

A lot of things work in Four Daughters and The Traditionalist’s favor including the landscape as well as being surrounded by corn grown by Vogt himself, a farmer by trade.

Bottles of The Traditionalist were on sale during the this past weekend’s grand opening. Eric Johnson/photodesk@austindailyherald.com

Four Daughters had also hired distiller, David Ray, early on in the process and considered it an easy route into the world of bourbon.

“It was like, we’re wasting all of this talent,” Vogt said. “Let’s put in the stills and David is so good. It was a no-brainer to put David into this position. He’s so good at it. He makes great bourbon.”

The distillery is just another step for Four Daughters that has continued to grow and expand over the years, starting first as a winery and then adding an event center just three years in.

Bourbon is just the next step.

“We’ve got good people that work for us, we have a really good following,” Vogt said. “Our clientele is very loyal. I think we’re maybe further along than we thought we would be.”