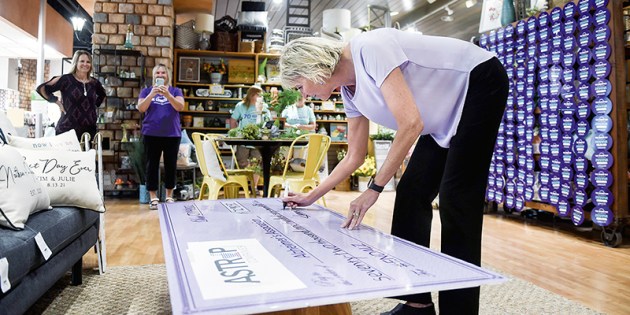 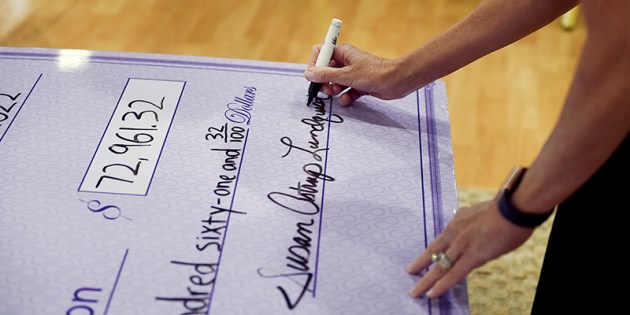 Susan Astrup Lundquist signs her name to the check made out for $72,961.32 to the Alzheimer’s Association Thursday afternoon. Eric Johnson/photodesk@austindailyherald.com 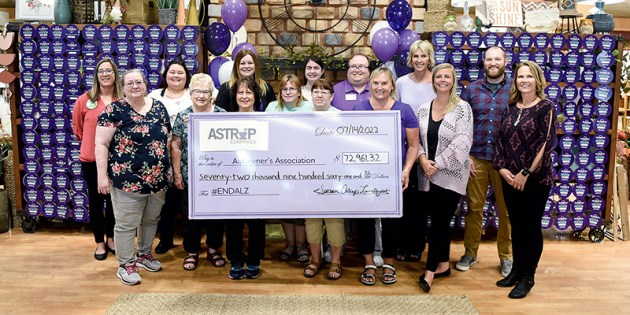 A check for $72,961.32 was donated to the Alzheimer’s Association Thursday afternoon, the results of this year’s Longest Day fundrive. Eric Johnson/photodesk@austindailyherald.com 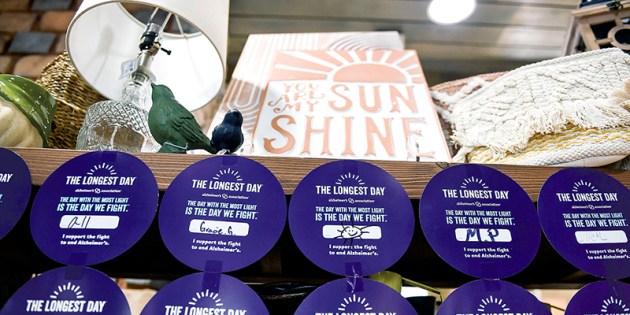 Placard’s representing those that gave to the Longest Day hang in Sterling Main Street Thursday where it was announced that $72,961 was raised for this year’s drive. Eric Johnson/photodesk@austindailyherald.com

The results are in and there is a lot to be happy about.

Thursday afternoon, Sterling Pharmacy and the Astrup Family Foundation presented the Alzheimer’s Association with a check for $72,961 at Austin’s Sterling Main Street, the product of the Long Day fundraiser.

The donation’s total is a perfect way to celebrate Sterling Pharmacy’s 70th anniversary.

“I think more and more people that are affected by Alzheimer’s see how devastating it is and want to get involved,” said Astrup Family Foundation President Susan Astrup Lundquist. “It just says a lot about the employees willing to ask and the customers willing to give.”

The foundation and the Sterling company set a goal of hitting the $70,000 mark in order to celebrate the anniversary. In order to do that they expanded the drive to encompass not only the stores, but other Astrup businesses including Sterling Long Term Care, Sterling Speciality Pharmacy, Smart-Fill and IHPN.

“We exceeded that [$70,000] goal which kind of floored us,” Astrup Lundquist said. “We really appreciated the communities we have businesses in.”

This is the seventh year of the drive formed in honor of Astrup’s founder, Leonard Astrup who battled Alzheimer’s and eventually died in 2014.

In the seven years of the drive, it has raised nearly $300,000 and it’s money that is very much appreciated by the Alzheimer’s Association, which relies primarily on donations from drives such as this.

Maura Studer, Longest Day event manager for Minnesota and North Dakota Chapters of the Alzheimer’s Association was on hand Thursday to accept the check.

“It truly means the most to us,” Studer said. “To be able to reach the communities and connect and hear their stories makes a difference. Every dollar goes a long way.”

Over 80% of money raised from the drive goes toward a variety of areas including Alzheimer’s care, support, research, awareness and advocacy.

With so much at stake, grassroots efforts like the Longest Day become so much more important.

“The strength of grassroots efforts connect local communities and allow them to grow our efforts,” Studer said. “It also allows us to offer education and support to caregivers”

Currently there are six million in the United States and 55 million worldwide that are coping with Alzheimer’s. Among these are 11 million who are caregivers.

“Getting these funds help us reach our goal of finding the first survivor,” Studer said.