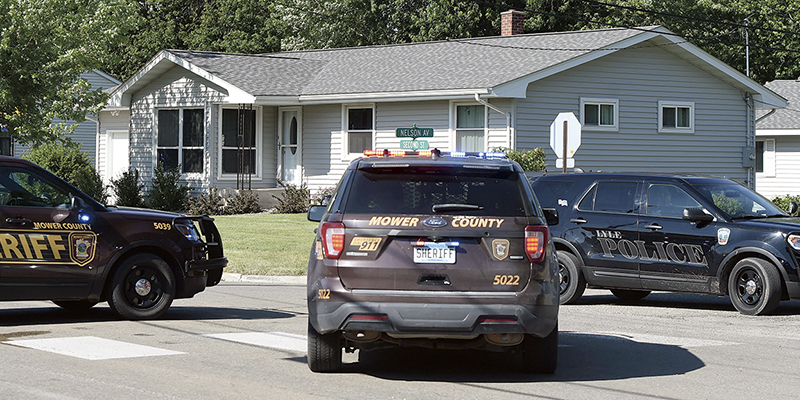 Law enforcement sets up a perimeter around one of two homes in Lyle they believed an armed robbery suspect from Austin may have fled to on June 24. Herald file photo

An Austin man charged with a total of eight felony charges has entered pleas of not guilty in Mower County District Court on Thursday.

Adrick Deonte Mims, 26, has been charged with multiple counts of robbery with a dangerous weapon, assault with a dangerous weapon and fleeing law enforcement in relation to three separate armed robberies of three Austin business including Reeds Fourth Avenue Food and Fuel, Cheer’s Liquor and Ankeny’s Mini Mart, all within a two-week period in June.

He was eventually arrested early in the evening of June 24, after fleeing to Lyle following the robbery of Ankeny’s Mini Mart earlier in the day.

Mims was discovered hiding in bushes beside a house that was within a perimeter established by law enforcement that included several agencies, from both Minnesota and Iowa.

According to court complaints, Mims allegedly robbed Reeds at knifepoint on June 12, escaping with $347.65. Seven days later, on June 19, Mims allegedly made away with about $1,500 in cash from Cheer’s.

During the Ankeny’s robbery, according to the court complaint, an off duty Austin Police officer sighted Mims as well as the suspect’s vehicle, a black Chevy Impala — both of which matched descriptions in a prior robbery on June 19 at Cheer’s Liquor in Austin.

Mims led law enforcement  through town before police called off the chase because of a danger to the public, but the vehicle was picked up again later in town and eventually fled to Lyle where Mims abandoned the vehicle and ran from the vehicle. Law enforcement initially thought he had ducked into one of two residences in the community where they established their perimeter.

Mims is now slated for a jury trial scheduled for Nov. 14.