‘Matilda the Musical’ features the young – the very young — at heart 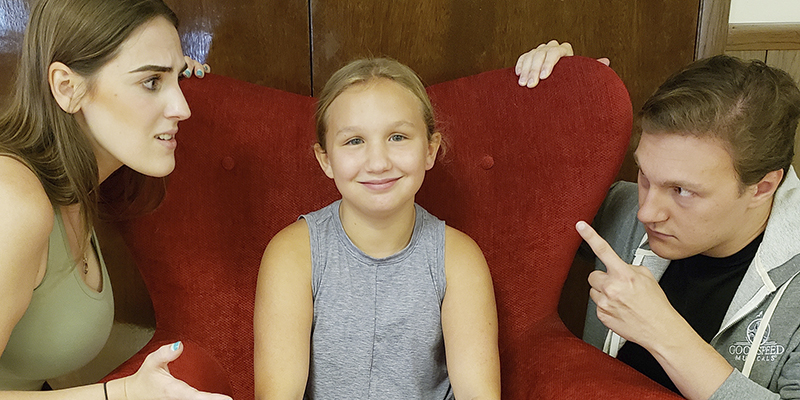 Nora Balsley recalled when she first stepped into South Square in St. Ansgar to begin her first rehearsal for the Cedar Summerstock Theater’s production of “Annie,” back in 2018.

She was all of 6 years old then. Now, a seasoned performer with the theater, the 10-year-old will appear front and center in the starring role as Matilda Wormwood in “Matilda, the Musical,” which opens June 28 at the Krapek Family Fine Arts Center in the Cedar River Complex in Osage.

“Matilda” marks the last show of Cedar Summerstock’s fifth season. It also follows the theater’s tradition of having the last show be a production geared toward kids. “Matilda” will feature almost 20 youngsters from Mitchell County.

The show, fashioned after the movie of the same name, is also the last show for a troupe of college-aged actors, musicians and technical crew members who are at the heart of Cedar Summerstock. The program features fine arts-geared students from across the nation to audition. The list of interested actors has grown steadily since the theater’s inception in 2017.

Natosha Guldan, 21, of Wisconsin Rapids, Wisconsin, and Griffin Cole of Atlantic Highlands, New Jersey, are two of those actors. They fill the two lead roles in the production with Guldan as Ms. Honey and Cole as Trunchbull. Both began appearing in productions as youngsters. Guldan, a Luther College student, is also a dancer and choreographer in addition to her singing and acting skills. Cole is a recent graduate of the Hartt School at the University of Hartford, and said will head to New York soon to pursue his musical theater career.

Both said they appreciate the summer stock experience, and love working with this show’s younger cast members.

“I would say the majority have a big passion to be here,” Gulden said.

“And that’s true even of the young, young kids,” Cole added.

Cole, who was also 6 years old when he first appeared in musicals, was amazed that Balsley displays such poise in the lead role.

“She gives me line notes,” Guldan added with a chuckle, referring to notes taken down to alert actors about mistakes in lines they might have made during rehearsal.

Director Nancy Lee, who is also the founder and artistic director for Cedar Summerstock, is equally impressed with the younger set.

“We are so grateful for these kids and their parents,” she said. “They understand the rigor (of rehearsals) and don’t complain after long days.  There is a common joy of doing theater and doing it at a level that is really high.”

“It doesn’t matter how old you are, you will enjoy this show,” she added. “It empowers children. Matilda is an empowering force who stands up for people who aren’t being treated well. The show is fun … and magical.”

“Matilda” runs through Aug. 7. For tickets, go to: www.cedarsummerstock.org. Tickets are also available at the door.