Austin grad Logan Kelly has taken it to the next level this past weekend at the Indiana Swimming Senior State Meet in Bloomington, Indiana, when he earned an Olympic trial cut time in the 200 breaststroke, securing himself an invitation to the 2024 trials meet to be held in Indianapolis at Lucas Oil Stadium.

“I really just wanted to win the event,” said Kelly, who will be a sophomore at IUPUI this fall. “I thought the guy next to me was closer than he was.” 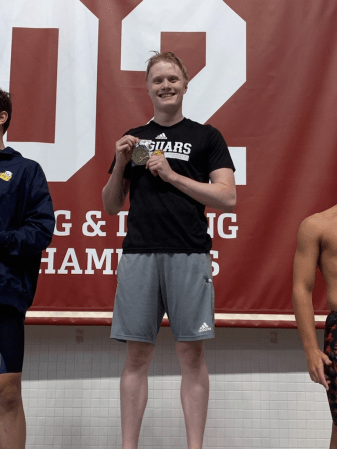 Kelly, a 2021 grad of AHS, swam a 2:21.07 in prelims Saturday morning to be seeded second going into finals on that evening. There, he cut 5.46 seconds to put up a 2:15.61, which is just under the Trials cut time of 2:15.99. The swim earned him a first-place medal, as well as setting both the meet record and the Jaguar Aquatics club team record.

Kelly also swam the 100 breaststroke and the 200 individual medley at the meet, earning second and 11th place, respectively. Both these races set team records for Jaguar Aquatics, as well.

In his six years swimming for Austin, Kelly set seven team records -— five individual and two relay— for the Packers, as well as two pool records — one individual and one relay — in Bud Higgins Pool. In his first year at IUPUI, he set two individual school and Horizon League records in the 100 and 200 breaststroke, as well.