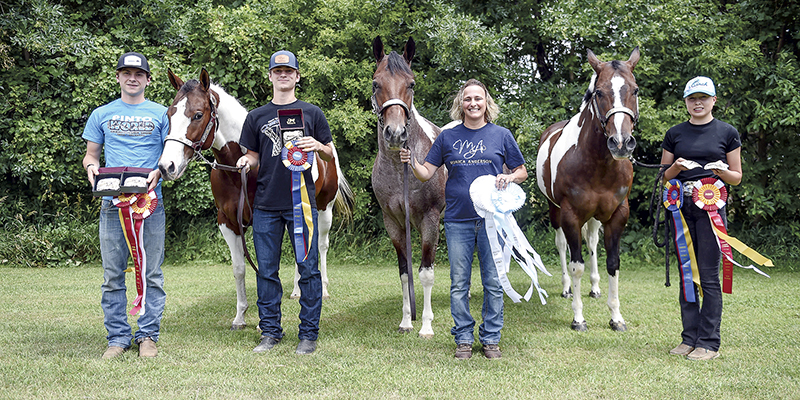 A Lyle family and an Austin teen have hit the big time and there’s no doubts they belong there.

Monica Anderson, her sons Tyson and Trey, and Winter Miller all finished highly in a variety of competitions in June at the Pinto World Championship Horse Show in Tulsa, Oklahoma.

The awards came from showing  the horses What Were U Thinkin, Lil Red Code, Silky White Stocking and True Story.

“A lot of it was not knowing if we belonged there,” said Monica, owner of Monica Anderson Performance Horses just outside of Lyle. “Leading up to it we were wondering what we were doing, but we realized we were doing the right thing and we belong here.”

Around 1,000 competitors took part in the competition, making all the finishes that much more significant.

For the 13-year-old Miller, the experience was one to remember, both for the group’s finishes and the stresses involved on such a big stage.

“It was very nerve-racking, but also very exciting and fun,” she said. “It was a really good experience.”

The Pinto World Championships is a large horse show that draws participants from all over the world and sees them competing in a number of different events including Western Pleasure, Halter, English and more.

During competition, judges are looking critically at how the horse carries itself though a walk, trot and canter.

While many of the shows the four compete in are in Minnesota and Iowa, there was no doubt that they were stepping out of their comfort zone a little.

However, the move felt right. Tyson Anderson is two years removed from Lyle High School having graduated in 2020. He has since moved into the professional aspect of horse showing, working closely with Monica.

“Being in the pro class, I feel really blessed to be competing where I was,” Tyson said. “It was a great experience, being just 20-years-old and being able to do that.”

While bringing home hardware from such a prestigious event was gratifying, there was also a sentimental value for some in the group.

For the Andersons, many of the awards came from showing Lil Red Code otherwise known as BJ, the offspring of another beloved horse.

“We’ve raised her from a baby from a really good mom we lost,” Monica said. “For us to go down there and do well meant a lot.”

“It was a really cool experience,” Tyson echoed. “To win awards with that horse really means a lot to me.”