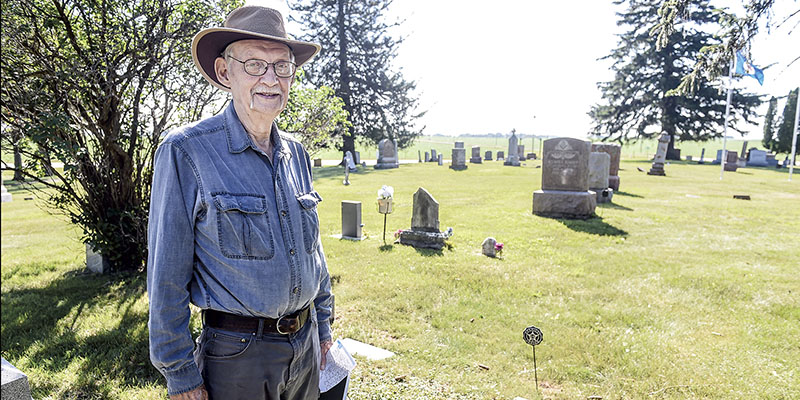 Waldo Lamb, the last Civil War Union soldier to die in Mower County, will be honored during a dedication ceremony Sunday at Greenwood Cemetery. Eric Johnson/photodesk@austindailyherald.com

On Wednesday afternoon, Don Peterson was walking through the grave markers of Greenwood Cemetery south of Brownsdale.

He stopped every so often to study one of the markers, before eventually making his way across the cemetery to one very special grave site.

“For me it’s very interesting,” he said. “These places are full of history.”

On this day, Peterson is here for one very specific person: Corporal Waldo W. Lamb, the last Union Civil War soldier to die in Mower County.

Lamb was the focus of a Sunday dedication ceremony at the cemetery, officiated by the Sons of Union Veterans of the Civil War, who have been running a program to identify those soldiers who served in the Union Army.

Lamb enlisted in the Union Army after his family moved to the area from Lambs Creek in Pennsylvania, at the age of 16, taking advantage of lax authentication to ensure he was of age.

“Back in the Civil War days, they weren’t real fussy about providing birth certificates to prove your age,” Peterson said. “If you said you were 18, you were 18. Here’s your gun.”

Waldo Lamb, the last Civil War Union soldier to die in Mower County, will be honored during a dedication ceremony Sunday at Greenwood Cemetery.

He served during the latter days of the war from 1864 to 1865, ironically with a Wisconsin unit: Muster Company D 37th Wisconsin Infantry.

During his time, Lamb participated in the Siege of Petersburg, the Battle of the Crater and the Battle of Boydton Plank Road — all taking place around Petersburg in Virginia.

He was honorably discharged and eventually married Emily Sevens in 1873, and had two children.

Peterson said he discovered the story of Lamb while looking through a History of Brownsdale book written by a Brownsdale teacher, Grace Gillette.

“I came out here and found him in the cemetery,” Peterson said.

Situated at the family site at Greenwood, Lamb’s grave is fairly innocuous. A simple slab with his name, life and death dates, an American Legion marker and the unit in which he served. If you aren’t looking for it, it might be easy to walk past.

Aside from the dates and the marker, there isn’t much indication he’s even a veteran.

Working with the SUVCW and the Mower County Historical Society’s Sue Doocy, Peterson was able to find not only Lamb, but also other veterans from the Civil War throughout the county.

“Sue Doocy has been a big help on this,” Peterson said. “She’s an incredible researcher.”

However, the fact remains that he may not always be finding a new face.

“I’m not sure how many I have found and some of them already have [been found],” Peterson said.

Still, Peterson scours the area cemeteries not only in an attempt to recognize those men who served in the Civil War, but to also fulfill his own love of history — a connection that follows his own time serving in the National Guard and the United States Army.

“History has been a part of my life and this is a part of history,” Peterson said.

Not that it’s always as easy as walking a cemetery and looking at names. Oftentimes, Peterson will spend more time researching than he will walking cemetery grounds.

This is especially true when working at rural cemeteries where records may be more sparse.

“They have good records in Austin,” Peterson said. “Cemeteries out in the county … maybe there was a town there or maybe there was a church there, but now it’s just a cemetery so the records aren’t as good there.”

However, that’s where the history is and that history will be on display Sunday when Lamb is honored.

Several family members will be in attendance, including a grandson currently serving in the National Guard.

But that’s only the tip of the iceberg.

Military service has been a staple within the Lamb family, with members serving in the Civil War, World War II and Vietnam. World War II veteran Art Lamb was a decorated veteran with a Purple Heart and three Bronze Stars for bravery in action.

Peterson said that projects like this and the finding of Waldo Lamb’s grave have been a wonderful reward for an interest in history.

“Now I have a name, then I have to go back and dig and look in different places to find when he served, where he served,” Peterson said, smiling. “When I get stuck, then I send a message to Sue Doocy.”

Look to Wednesday’s Herald for more on Sunday’s event.