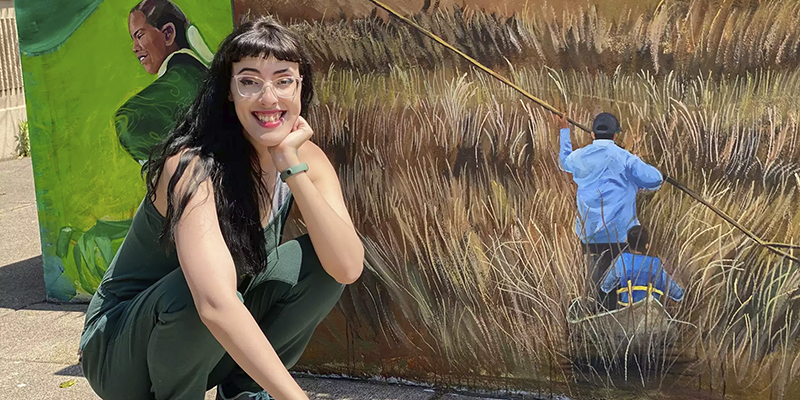 Moira Villiard, coordinator of the Chief Buffalo Memorial Mural project in Duluth, crouches in front of a wall she painted of a man harvesting wild rice. July 13. Dan Kraker/MPR News

Artists in Duluth are hard at work completing a large mural along the city’s Lakewalk next to Lake Superior. It honors Chief Buffalo, an Ojibwe leader who 170 years ago completed a remarkable journey to Washington D.C., that helped preserve Ojibwe homelands.

Recently a group of young people from the Red Cliff Band of Lake Superior Chippewa in northern Wisconsin traveled to Duluth to contribute to the mural honoring their ancestors.

“I’m making seaweed, so that fish can’t see me,” one called out.

Newago says he learned in school about Chief Buffalo and the importance of his trip to Washington. He said it’s an honor to work on the mural.

“Just to keep the culture alive, I guess. It’s just kind of fun, because, if I have kids, I can take them up here and say that I helped paint [this].”

The project started in 2019, shortly after the city of Duluth renamed Lake Place Park, which covered a tunnel over I-35 next to downtown, to Gichi-ode’ Akiing, which means A Grand Heart Place in the Ojibwe language.

Originally several blandly colored ramps and stairways connected the park to the Lakewalk and the Lake Superior shoreline.

Now a series of bold, bright murals cover those walls. Together, they make up the Chief Buffalo Memorial Mural project. One wall depicts the Ojibwe creation story. Another is a map that shows Chief Buffalo’s journey. Another shows the different treaties that were signed, reserving Ojibwe rights to the land.

There are also paintings depicting Native people today, harvesting wild rice, dancing and picking berries. Organizers say its important to show that Native people not only have a long history here, but are still thriving.

“These are people today, still doing the stuff that our ancestors have done for hundreds, thousands, however many years,” said Moira Villiard, the mural project’s coordinator. She’s a visual artist based in Duluth and a Fond du Lac Band direct descendant.

“A main goal for me is creating an immersive arts experience that educates folks, that brings to light more indigenous representation from the area, and brings people closer to history,” she said.

Chief Buffalo was a prominent Ojibwe leader in the early 1800s who lived on what is now Madeline Island, in the Apostle Islands off the south shore of Lake Superior in Wisconsin.

In 1850, the U.S. government ordered the Ojibwe, or Anishinaabe people, to move west of the Mississippi River from their lands around Lake Superior.

Later that year, in what’s been called the Ojibwe Trail of Tears, government agents tricked tribal members into walking hundreds of miles to Sandy Lake, in Minnesota, to receive their annual treaty payments, only to be trapped there in the winter.

Robert Buffalo, hereditary chief of the Red Cliff Band and a direct descendant of Chief Buffalo, who escorted the youth to Duluth to help with the mural, said 400 of his ancestors died.

“The young warriors wanted to go to war with the federal government, and Chief Buffalo, the other elder chiefs, asked them to give them one more chance to go to D.C.,” he said.

So, at the age of 92, Chief Buffalo and a handful of companions set out for Washington to try to convince President Fillmore to let his people stay on their land. They traveled by canoe, steamship and train.

“It was kind of a planes, trains and automobiles,” said Michele Hakala-Beeksma, a member of the Grand Portage Band of Lake Superior Chippewa who’s researched Chief Buffalo for the St. Louis County Historical Society.

Government agents tried to turn them back because they didn’t have permission to leave their territory. The Ojibwe emissaries ran out of money. But they persisted. They gathered signatures from supportive Non-Native people along the way, and held fundraisers in New York City.

Eventually they secured a meeting with the President, where Buffalo says they took out a ceremonial pipe they made for the occasion.

“And they smoked that pipe for a day and a half, after that ceremony and smoking, the president said, ‘I’m gonna rescind that removal order.’”

Two years later, the Ojibwe and the U.S. Government signed the treaty of 1854, which secured a permanent land base for Ojibwe bands in Wisconsin and Minnesota, and reserved their rights to hunt, fish and gather across their traditional homelands.

Mural organizers hope to install plaques to explain that complex history and its significance today.

“We want people to learn the history and understand what this means to Ojibwe people,” said Michelle Defoe, a Red Cliff Band Member and Duluth artist who’s another artist working on the mural.

“So that’s what I hope that people walk through, and they see the beauty of our culture, but also what this land was like before it became the city of Duluth and what it continues to be today as well.”

Villiard estimates the project has cost about $100,000 to this point. Initial funding came from Zeitgeist, a local community arts and development organization. The American Indian Community Housing Organization and the city also contributed funding.

The artists hope to have the mural complete by the end of July.