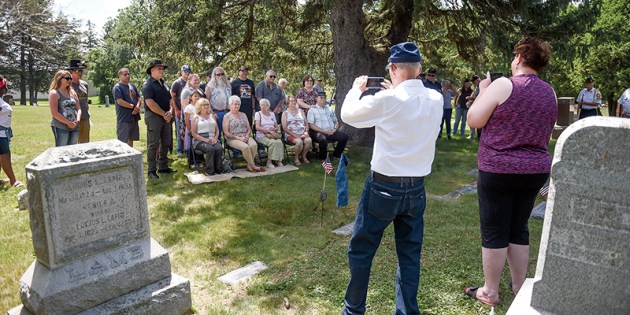 The family of Waldo Lamb pose for pictures during his dedication ceremony at Greenwood Cemetery Sunday. Lamb was the last Civil War Union veteran to die in Mower County, having passed in 1938. Eric Johnson/photodesk@austindailyherald.com 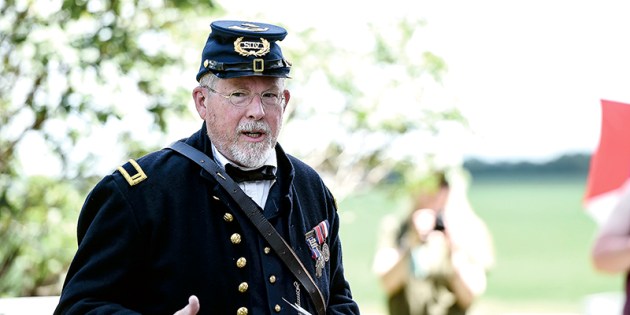 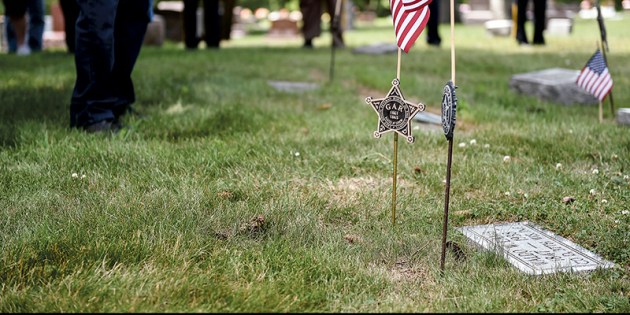 The newly unveiled grave marker at the grave of Waldo Lamb marks Lamb as a Civil War veteran. He was the last Union veteran to die in Mower County. Eric Johnson/photodesk@austindailyherald.com 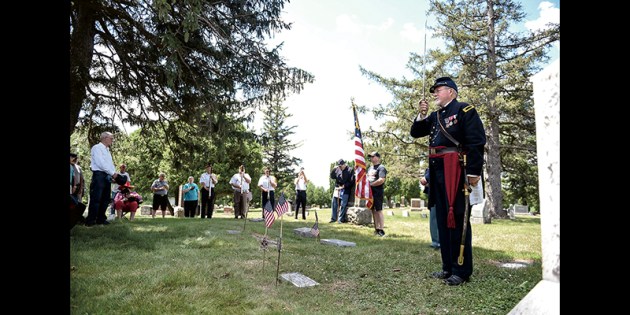 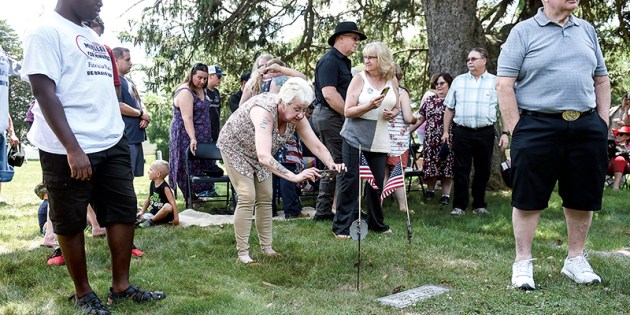 Members of Waldo Lamb’s family take pictures of his grave in Greenwood Cemetery after the new marker was revealed Sunday marking him as a Civil War veteran. He was the last Union veteran to die in Mower County. Eric Johnson/photodesk@austindailyherald.com

Beneath the sound of a 21-gun salute and Taps, the grave of Civil War Union veteran Corporal Waldo Lamb was dedicated Sunday afternoon at Greenwood Cemetery.

Lamb was the last Civil War Union veteran to die in Mower County when he passed away in 1938.

“We are here today not only to honor all of our veterans, but specifically the 391 Union Civil War veterans interred in Mower County and to forever mark the resting place of Corporal Waldo Lamb, the last Union Civil War Soldier buried here in this patriotic county,” said Gary Carlberg, Department of Minnesota VFW Membership Chairman and Civil War reenactor.

Lamb enlisted in the Union Army after his family moved to the area from Lambs Creek in Pennsylvania, just before the age of 16.

He served during the latter days of the war from 1864 to 1865, ironically with a Wisconsin unit: Muster Company D 37th Wisconsin Infantry.

During his time, Lamb participated in the Siege of Petersburg, the Battle of the Crater and the Battle of Boydton Plank Road — all taking place around Petersburg in Virginia.

He was honorably discharged and eventually married Emily Sevens in 1873, and had two children.

Among the family in attendance on Sunday was David Johnson, a staff sergeant with the Minnesota National Guard in St. Paul.

Holding the American Flag behind the grave of Lamb during the ceremony, Johnson said afterwards there was no way he was going to miss Sunday’s event.

“I had to get out of Guards this weekend because this is my drill weekend,” Johnson said smiling, adding that he put in a bulk of his work early in the weekend to be able to attend. “I’m like, ‘I did my part, I’m taking Sunday off.’ I had to be here.”

Johnson, who is Lamb’s great, great grandson, is part of a family with a long line of distinguished military service.

“If it weren’t for him, my grandpa who served, my dad who served, we wouldn’t have the freedoms we have today,” he said. “I’m just proud to be continuing that service.”

Brownsdale’s Don Peterson was the one who tracked down the grave of Lamb, digging into the background with the help of the Mower County Historical Society’s Sue Doocy.

Carlberg said it’s because of the work that people like Peterson and Doocy put in that make the work of the Sons of Union Veterans of the Civil War attainable, the group behind the work to identify Civil War soldiers.

They combine with Carlberg’s efforts to get to Sunday’s dedication ceremony, and is a way to continue to honor those who fought in America’s deadliest conflict on its own soil.

“We’re recognizing all veterans, and especially Civil War veterans and he is representative of all Civil War veterans because he’s the last one who died,” Carlberg said. “Whether they served on the Union side or Confederate side — they were all Americans.”

For Johnson, though, it’s a chance to live the family history and the proud heritage it recognizes.

“I found out [about Lamb’s history] maybe about five years ago,” Johnson said. “My family pretty much knew, but I’m just getting to know this side of the family and we only live 10 miles away from my grandma. It’s a blessing.”