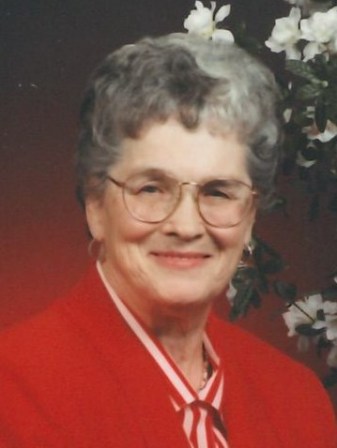 Charlotte, known by everyone as Chuck, was born July 28, 1923, to Frank and Lois Jennings, in Boyceville, WI. The family moved to Grand Meadow, MN when Chuck was four. She was the fifth child in a family of eleven.

She graduated High School in 1940 and attended Austin Jr. College in 1941 and 1942, while working at Hormel. She met her husband, Cliff, in 1944 and they were married in 1945 at St Augustine Catholic Church. They were parents to Keith, Tim, Tom, Kevin, and Colin. Chuck had delivered, prematurely, a baby girl in 1946, before the boys were born, she died at birth.

In 1963, Chuck returned to the workforce as a Cashier Bookkeeper at Tempo. In 1965 she started work at the Austin Clinic, as a bookkeeper and later became Assistant Administrator until she retired in 1988. After retirement, Chuck helped finish a book on the history of the Austin Clinic and is the only record of the first group practice in Austin, which started in 1919.

Chuck and Cliff enjoyed travel for a while, but she wanted to still be of value to her community. She continued her volunteer work serving on the Salvation Army board for 13 years, years at the Red Cross, Hormel Home board, Austin Artist Series board, and others. She was a charter member of St Edward’s Catholic Church, taking communion to the house bound. She enjoyed her memberships at the Floral Club, PEO, and the Hormel Home. In 2000, she worked parttime for the Austin Convention and Visitors Bureau. At age 77 she was named Outstanding Older Worker in the state and represented Minnesota in Washington, DC.

A special “Thank you!” goes to Sacred Heart, St Croix Hospice and many friends and relatives that visited her.

A Memorial Mass will be celebrated 11 am on Thursday, July 28, 2022 at St. Edward’s Catholic Church with Father James Steffes officiating. Friends may call from 5-7 pm on Wednesday, July 27, 2022 at Mayer Funeral Home.

In lieu of flowers, memorials are preferred to Honorflight.org, Stcroixhospice.com (Rochester office), or donor’s choice.