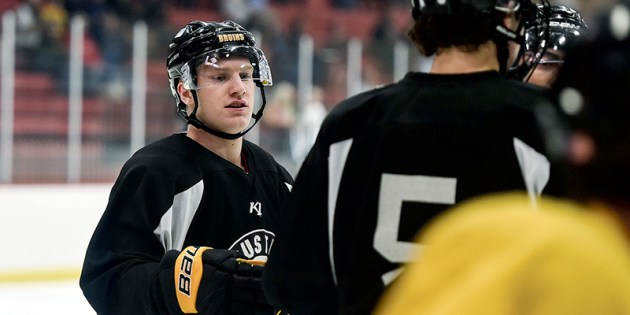 Austin Bruin and a captain for the upcoming season Walter Zacher skates over after the black team scored a goal Friday night in Riverside Arena. Eric Johnson/photodesk@austindailyherald.com 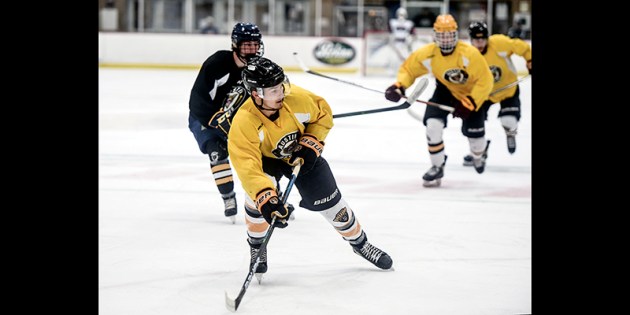 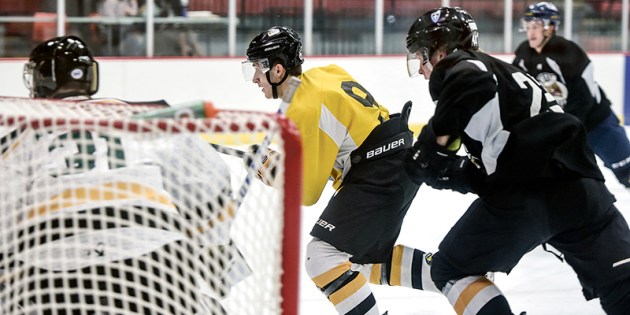 Last season, the Austin Bruins learned how hard they had to work just to make the NAHL playoffs. Now the team knows that it has to work even harder if it wants to make a playoff run.

After being swept by Aberdeen in the NAHL Central Division semifinals in April, the Bruins are looking to a new group of leaders who are already beginning the 2022-2023 season.

“It hasn’t been a whole lot of time off, but there was that month where other teams were still playing and it leaves a sour taste in your mouth,” second year Bruins forward and new team captain Jack Malinski said. “We’re ready to get back at it. We’ve got to get ready for next year. It comes up quick.”

Austin wrapped up its team camp in Riverside Arena Friday night with the annual Black and Gold scrimmage and Malinski’s Gold team won 5-1.

The week allows head coach Steve Howard to begin shaping out his roster and it also gave a chance for Malinski to get to know some of his new teammates. Fellow veterans Walter Zacher and Gavin Morrissey also began their roles as leaders for a squad that is hoping to take things to the next level.

Zacher, who is from Buffalo, New York, has put up 25 goals and 16 assists in 70 games for the Bruins over the past two years

“The camp was good, competitive and fast paced. Usually it’s much more choppy, but it felt like game speed,” Zacher said.

Morrissey, who is from Rochester Hills, Michigan, had five goals and six assists in 42 games last season. He was part of a big group of young players who got their feet wet with the Bruins last season.

“It’s kind of a role change for me and with that comes a lot more expectations,” Morrissey said. “I have to step up in a few different ways and I have to be a role model. We had a group of leaders last year and we all learned a lot. We’re going to continue the tradition of helping the younger guys.”

Zacher said the Bruins learned that they can’t take anything for granted after being ousted in the first round of the playoffs in April.

“Maybe we took the Wings a little bit lightly after beating them three out of four, and you can’t do that,” he said. “We have to grow from that mindset.”

Malinski, who is from Lakeville, had five goals and 16 assists in 55 games last season.

The Bruins will open the upcoming season in September.

“It’s going to be a blast,” Malinski said. “Last year we had some awesome veterans who gave us that extra step that we needed to improve our game. Now we can pass it down to all of these young kids. We’re looking to play all 60 games hard.”