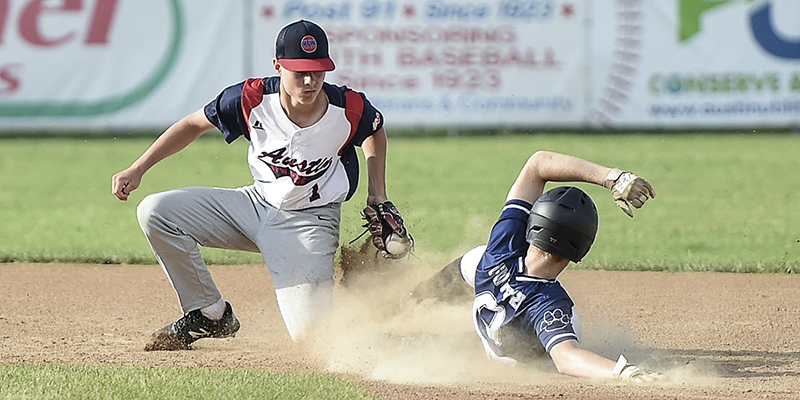 Austin VFW’s Peyton Ransom makes a play on AJ Rhoades on a stolen base attempt at second base earlier this month at Marcusen Park. Herald file photo

The Austin Post 1216 baseball team knows how unpredictable postseason play can be and the team is hoping that is a good thing as Post 1216 is coming in as an underdog as it prepares to host the State VFW Baseball Tournament next week.

Austin hasn’t won a postseason contest this year, but it is playing in the tournament as a host team. Isaac Osgood knows that being seeded at the state tournament isn’t the most important thing as he was a member of last year’s Austin team that was eliminated early on, despite being the top seed. Last year’s state tournament was also held in Marcusen Park.

“We know that wins don’t come easy at state. Last year we got blanked and we were the number one seed. We didn’t win a game,” Osgood said. “We have to go out and try out best. We’ll be ready to play and we’re trying to shock some people.”

It will be the first ever state tournament for some of Post 1216’s players, including Landon Meyer of Lyle. Meyer is not feeling any fear or intimidation as he prepares for some of the biggest games of the year.

“We’re going to see some good teams,” Meyer said. “We’re trying to prove a lot of people wrong. We have to throw strikes and hit hard.”

Austin is hoping to avoid rust as it has been off for the last two weeks due to being eliminated in Sub-Districts. Post 1216 head coach Zach Huntley gave the team one week off to refresh, but it was back to practice the following week to prepare for state.

“We’re going to try and put on a show next week. We want to win a game and show what we can do,” Huntley said. “Anything can happen in playoff baseball.”

Austin will have its full roster in the state tournament as pitcher and infielder Peyton Ransom and catcher Dakota Retterath will be fully available after splitting time with the Legion baseball team over the summer.

“It will help to get those two guys together,” Huntley said. “They put a little pop in the middle of the lineup and they can give us some confidence. Peyton hasn’t pitched for us in awhile and it will be nice to have him on the mound in our first game.”

The state tournament gave Austin a great opportunity to showcase Marcusen Park, which has stood in its current location for seven decades.

“This is the best ball field in Minnesota,” Meyer said. “I love playing here in the summer and during high school ball.”