AG rivals debate what it will take to fight crime 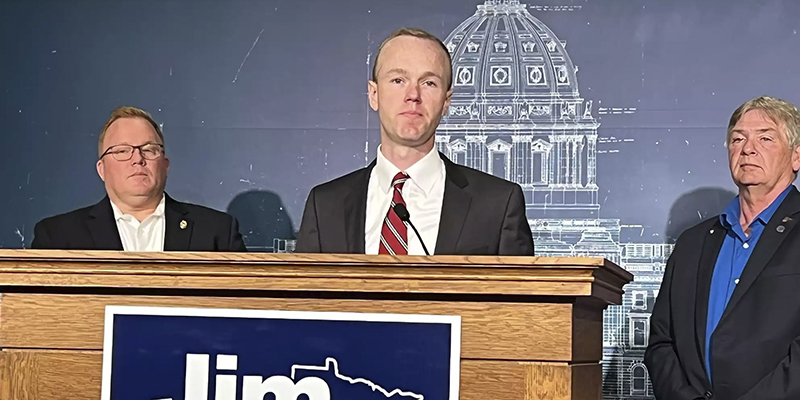 The Republican-endorsed candidate for Minnesota attorney general Jim Schultz laid out his plan for reducing crime during a news conference on July 11. Brian Bakst/MPR News

In a preview of their likely campaign to come, DFL Attorney General Keith Ellison and Republican challenger Jim Schultz offered differing views Monday on what’s driving crime and what it might take to fight it.

Schultz, a political newcomer, would be the nominee if he wins the August primary over 2018 candidate Doug Wardlow, who is running despite losing the endorsement to Schultz at the state party convention.

Schultz said at a Capitol news conference that he would shift dozens of lawyers from regulatory assignments to criminal prosecution if he takes over the attorney general’s office next year.

The office has long made consumer protection and civil enforcement its main focus. But Schultz said not all of those duties are as worthwhile at a time when public safety concerns are increasing.

County attorneys handle almost all felony-level prosecutions in the state unless they seek help from the attorney general.

Schultz said the reinforcements he’s contemplating wouldn’t go into counties uninvited – although he said he would consider legislation to broaden the office’s prosecutorial purview. But he said he won’t hesitate to criticize prosecutors he views as too lenient.

“A substantial reason why we have such extraordinary crime is people think they can commit without consequences or at least without serious consequences,” Schultz said. “We have to ensure that the message goes out that if you commit a serious crime in the state of Minnesota, you will spend time in prison. And we will have prosecutors that will hold you accountable.”

Ellison has asked the Legislature for more funding for lawyers who assist counties or do other work in the criminal prosecution realm, but that request stalled amid a budget dispute this year. He said those nine additional attorneys are needed to help counties that seek it, to handle appeals and to work on matters related to civil commitment of sex offenders.

For his part, Ellison said Republicans need to be willing to debate stiffer gun laws if they’re looking to reduce violent crime.

He held a roundtable in Maplewood with civic leaders and other public officials about gun-related violence.

“You cannot have a serious conversation about public safety and exclude a dialogue about guns,” Ellison said. “It’s just not possible.”

Ellison supports stepped-up background checks, more restrictions on sales of semi-automatic weapons and regulation on parts used to make “ghost guns” that are harder to trace.

Schultz said existing gun laws are adequate and he blamed judges for not fully punishing offenders who use guns in their crimes.

“We have lots of laws and access to guns,” he said. “We have the background check process. We have so many things, so many laws on the books, many of which we’re failing to enforce adequately.”

The winner of the November race could also determine the fate of a former Brooklyn Center police officer convicted in a deadly traffic stop.

Kim Potter was sentenced in February to two years in prison in the death of 20-year-old Daunte Wright during a stop where she drew her gun instead of a Taser.

She’s due to leave prison next April but would remain on supervised release through December 2023.

The governor leads the three-member Board of Pardons but their actions must be unanimous. The attorney general sits on that panel.

Schultz said he supports commutation because he believes Potter was overcharged.

“She made a serious mistake for which there should be consequences,” he said. “But consequences under a statute that is simply inapplicable to the facts as they developed in that case was deeply wrong. And it was done fundamentally for political purposes.”

Ellison’s office led the prosecution team and he has defended the decision to pursue a first-degree manslaughter charge.

The third board member is Minnesota Supreme Court Chief Justice Lorie Gildea, who hasn’t commented on the case.