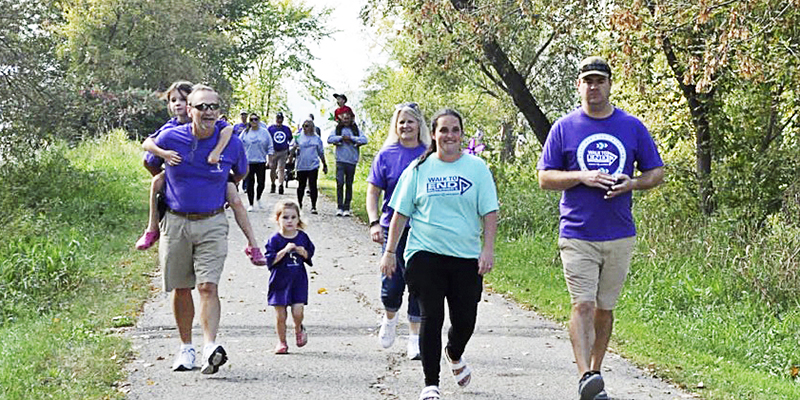 People take part in a past Albert Lea/Austin Walk to End Alzheimers. The walk will be getting into the swing of things with a week of activities starting next week. The walk itself will be held in September. Photo provided

With an eye toward increasing participation in Austin, organizers for the Albert Lea/Austin Walk to End Alzheimer’s are expanding some of the summer events in Austin this year.

Taking a cue from Paint the Town Pink, the week of June 20-25 has been designated Paint the Town Purple in honor of the walk and will feature events in both communities.

It will also serve as a precursor to the walk itself, which will be held on Sept. 17, at Frank Hall Park in Albert Lea.

“This year, more than ever, we have a lot more events in Austin, which can get more people involved,” said Walk chair Jaclyn Bird.

Several events will be held throughout that week that haven’t been in Austin before in the hopes that the walk can make full use of the two communities who are so close to one another.

The goal is simple: get people involved.

Organizers are hoping for over 200 participants this year for the walk, which takes place in September. They are hoping that next week’s events will help generate excite in Austin to take part in the Albert Lea walk. Photo provided

Bird, who has been involved with the walk since 2019, first as a member of the committee and then as walk chair for the last two years, has a vested interest in being so closely connected to the walk.

The company of which she is a part of, Edward Jones, is a presenting sponsor and through her clients she sees the effects Alzheimer’s has on families.

On a personal level, her grandfather grappled with Alzheimer’s disease for the last eight years and finally succumbed earlier this year.

All of these things have contributed to Bird pushing for more Austin participation in the walk. In just two short years, Bird has seen the results of the push.

“It was just far enough away for the businesses … They want to make sure it’s going for a good cause and get a little bit of publicity for it and that’s understandable,” Bird said. “We’re seeing a transition now and we’re getting more support.”

“A lot more sponsorships for sure,” Bird continued. “Businesses are taking the time, volunteers too. We’ve had businesses say we can’t necessarily sponsor, especially coming out of COVID-19, it’s been tough for sponsorship dollars, but they say ‘we’ve got 10 employees, what do we need to volunteer?’”

For Bird, the hope remains that more events can find their way over to Austin.

“I would eventually like to see if we could get more events at least,” Bird said. “Not the full walk, because I don’t want to take that away from Albert Lea either, because they’ve done an amazing job over the last couple years. Just more walkers. The businesses have been amazing so far. If we can keep that momentum and get more walkers in Austin, that would be ideal.”

• June 20: Stop by Ignite Nutrition in Albert Lea (701) Marshall Street and Rave Nutrition in Austin (310 Main Street North). A portion of the proceeds will be donated to the walk.

• June 22: Albert Lea Kickoff Party — Wind Down Wednesday, 5-7 p.m. in Historic Downtown. Get information for and register for the 2022 walk. Stop by Mocha and Mini LLC (1317 SE Broadway Avenue). A portion of all proceeds for the day will be donated to the walk.

• June 23: Purple Hat Lunch at the Mower County Senior Center. Show up in a purple hat between 11 a.m. to 1:30 p.m. and receive a free lunch courtesy of the Cedars of Austin. Treat yourself to Papa Murphy’s pizza in Albert Lea. A portion of all proceeds from 3-7 p.m. will be donated to the walk.

• June 24: Get your boost at The Coffee House on Main (329 Main Street North, Austin). A portion of all proceeds from 9 a.m. to noon will be donated to the walk.

Look for donation boxes while you dine at Bleachers, Pizza Ranch and Trumble’s 2.0H.