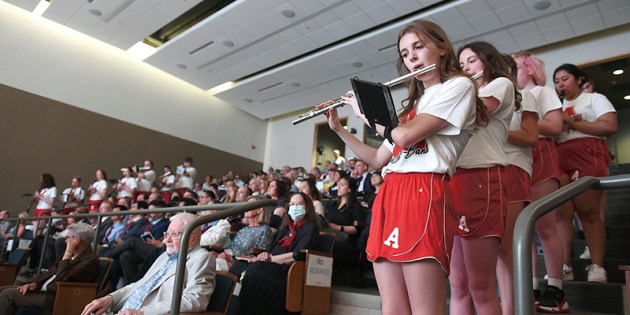 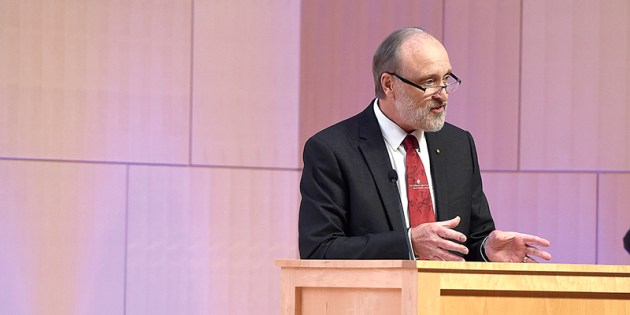 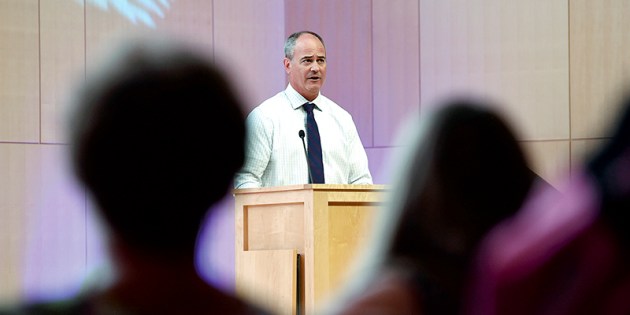 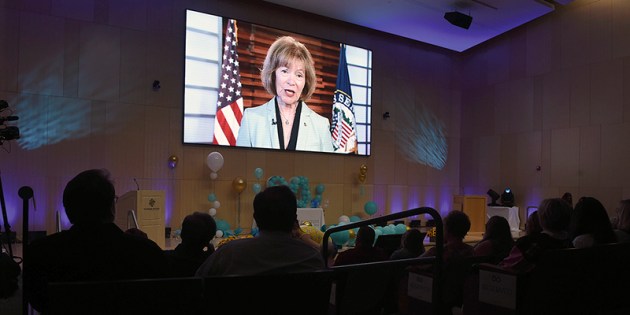 Sen. Tina Smith addresses those in attandance at the 80th Anniversary Celebration for The Hormel Institute Friday through a pre-recorded video . Eric Johnson/photodesk@austindailyherald.com 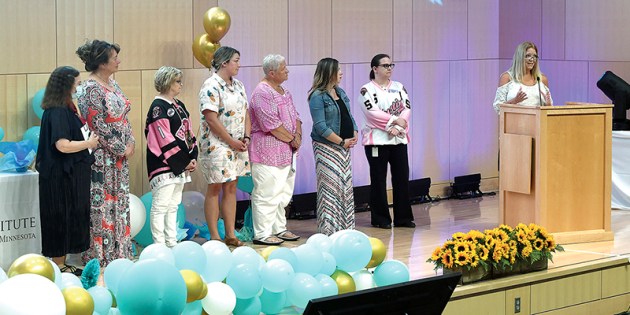 Past Paint the Town Pink ambassadors stand with 2017 ambassador Debbie Retterath Friday during the 80th Anniversary Celebration at The Hormel Institute . Eric Johnson/photodesk@austindailyherald.com

The Hormel Institute, on Friday afternoon, hosted a special 80th Anniversary Celebration that highlighted not only the past, current and hopefully future achievements of curing cancer, but the partnerships that helped it through eight decades of research.

Within a packed Live Learning Center at The Hormel Institute, several speakers shared their stories of what the institute has become to the community of Austin and the research community.

“We are your institute,” said Dr. Robert Clarke, the latest in a long line of directors to helm the position over these past 80 years. “We would not be here without you.”

As each speaker came forward, it quickly became clear just how profound of an impact the Institute has had over the years, from its earliest days of focusing on food safety and food preservation to now — an industry leader ahead of the grade in the fight against cancer.

Based on that legacy, said Hormel Foods Corps CEO and President Jim Snee, there is every reason to be excited for the future of The Hormel Institute.

“We should all be excited about the next 80 years,” Snee said. “We look forward to continuing on this journey with The Hormel Institute.”

Collaboration was also recognized by Mayor Steve King, who stressed just how embraced the Institute should be in calling Austin home.

“This is how you get things done … it’s through collaboration,” King said.

Prior to Friday’s program, Clarke was able to expound at length about the Institute’s last 80 years.

Even though he’s only been at the head of the Institute for a relatively short amount of time, coming to the position in 2020, he certainly isn’t at a loss to recognize how far the HI has come since its inception in 1942.

Taken as a whole, the work and the achievements establishes that strong legacy that others look up to, Clarke said.

“It means a lot,” he said. “Science and discovery is a path. You never see the end of it. You see a horizon, but it’s always changing the closer you get to it.”

“Eighty years is just a blip on that pathway,” he continued. “It’s just one stopping point along that road of discovery. We are here because of all the work that has come before. In 20 years the Institute will be where it is then due to the work we do today.”

That continuing legacy can be put on the shoulders of the Institute scientists themselves. Coming from all over the world, the scientists have put in the work and the results that have made it recognized across the globe.

It makes it possible to continue that recognition.

“The quality of the work is exceptional,” Clarke said. “That’s evident in the ability to compete nationally for funding from the [National Institutes of Health] and [National Science Foundation]. Our ability, our work in the highest impact research journals tells us the work we’ve done here is competitive with the entire world.”

Clarke also turned his vision forward and is already excited by what the future may hold.

In his mind, there’s no question as to what might be accomplished.

“We will cure cancer. We’ve already cured some cancers,” Clarke said. “We will cure more and more until cancer is a disease where people will look back on it and say, ‘I’m glad I didn’t live then because it doesn’t exist now.’”

Even then research will continue.

To get there will mean rapidly improving and increasing strides in technology and achievement and with the work the Institute has achieved with its neighbors at Hormel Foods, the University of Minnesota and the Mayo Clinic, Clarke remains incredibly optimistic about the next 80 years.

“You are judged by the company you keep and we’re in really good company,” he said.

But for many, the reach of the Institute is measured by its impact. Debbie Retterath, a cancer survivor and ambassador for Paint the Town Pink recognized that during her presentation Friday.

“Eighty years of miracles,” she said. “Eighty years with so many miracles to come and I am humbled to be a part of it.”