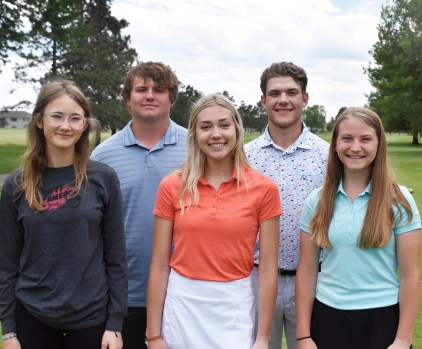 HAYFIELD – With three state titles in the last two years, sports are booming in Hayfield right now, but it’s not just the basketball and baseball teams that are on the rise.

The Hayfield golf team has made big strides in success and numbers in the past few years and now the team is sending five golfers to state this season. The Viking girls program has been completely revived from where it was a few years ago as all four golfers on the team just started playing varsity golf two years ago.

Eighth grader Carly Bronson made it to state in a playoff last year and she’s back this year along with junior Avery Towey and sophomore Kristen Watson. Sophomore Chelsea Christopherson just missed out on state by a few strokes.

“We’re lucky to have coaches who actually want to help us fix our swing when we’re struggling,” Towey said. “We also build each other up as a team. We didn’t really know each other that well before golf and we’ve gotten really close.”

Towey came to golf to honor her friend Macy Holtan, who passed away in a car wreck in January of 2021. Holtan had been a golfer since she was a youth.

“I started golfing because of Macy Jo. She golfed since she was little and my family is close family friends with hers,” Towey said. “I wanted to represent her by trying out golf and I’ve really enjoyed it. I have a love for it now.”

Watson went out for golf last year for the first time and she’s slowly figuring out the game after thriving on the basketball court as the point guard of one of Hayfield’s most successful girls teams in school history this past winter.

Watson is learning to manage her approach as she figures out how to slow her mind down.

“Golf is a lot different than basketball,” Watson said. “You have a lot more time to think and I’m used to just thinking quickly and reacting. You also can’t control as much where the ball goes because I’m not as good at golf as I am at basketball.”

Carly had a lot of success last season, but she didn’t come into this season with any overconfidence.

“It’s different every year and you just have to play your best,” Carly said.

The Hayfield boys will be represented at state by long-time golfer Keegan Bronson and first time state qualifier Sam Tucker.

Keegan, who is the older brother of Carly, will be making his fourth trip to state for the Hayfield boys. The senior would have likely gone five times, but he lost one year to COVID-19.

He’s been a top-30 golfer in past state meets and he’s hoping to be up there again as he closes out his Viking career.

“I’m always hoping to do better,” Keegan said. “You have to put in the time in the summer. You can’t really do much within a two month span in the spring. You have to do a lot in the offseason.”

Keegan is going to golf at Waldorf University next season and he’s looking forward to keep improving next season.

“I’m happy and sad at the same time, because it’s my last time with Hayfield,” Keegan said. “But I get to go play in college, so that’s the good thing.”

Tucker made it to state despite having some setbacks at the Section 1A Meet on Wednesday. Tucker had nine strokes on one hole, he hit an opponent’s ball for a two stroke penalty on one shot and he needed an opponent to miss a short putt to avoid a playoff for the final state qualifying spot.

“I’m just glad I made it to state,” Tucker said. “We always compete with each other. I worked a lot on my game last summer.”

The Class A State Golf Tournament will be held at Pebble Creek in Becker on June 14-15.