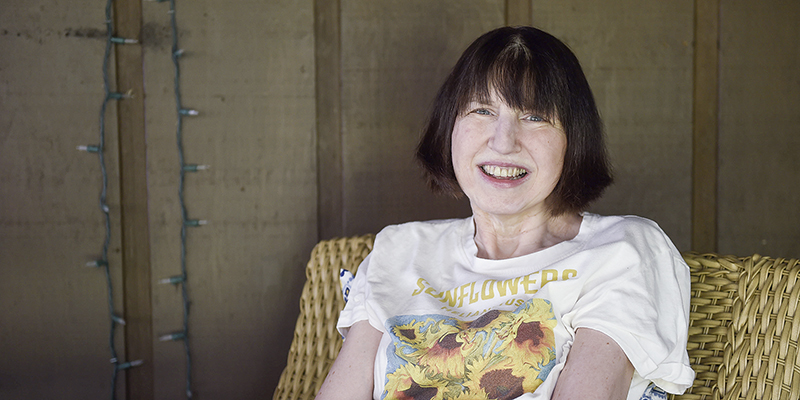 Sarah Lysne has taken her columns running in the Austin Daily Herald and compiled them in a new book about living with ALS title “Choosing Joy.” Eric Johnson/photodesk@austindailyherald.com

“One day it occurred to me that we don’t have to be famous to be remembered. The only thing that we really have to do is to love and to be loved. That is the greatest gift that we can ever hope to be given in this world.”

Longtime Austin resident Sarah Lysne once wrote these words in an Austin Daily Herald column titled “The joy of living with grace.” A wife and mother of three living with amyotrophic lateral sclerosis (ALS), Lysne wrote of the pressure she put on herself to not be forgotten, leave a stamp on the world even after she’s gone. 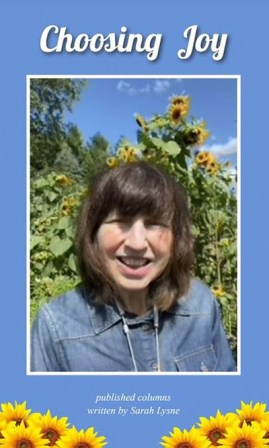 Now after three years of living with ALS and two years of writing columns about it, Lysne realized that being forgotten is impossible when you’ve built a community and family on the foundation of love. Lysne has published the first years’ worth of her writings in her new book, “Choosing Joy,” which shares the namesake of her column. “The joy of living with grace” is just one example of many where Lysne chooses to be uplifted despite the terminality of her diagnosis.

“I explain how I have learned to live with grace by following the example of other people in my life who have had to live with adversity,” Lysne says. “I explain that, at age 55, I have finally realized that the greatest gifts in life are to love and be loved.”

The average life expectancy after an ALS diagnosis is two to five years, according to the ALS Association. Some people live for 10 or more years with the condition. It is a neurological disease causing muscle weakness that progressively affects breathing, swallowing, speech and movement — and is the disease that ailed famed physicist Stephen Hawking.

Lysne had been writing all her adult life in and around Austin, but when she was diagnosed in 2019, she took to the written word in hunt of silver linings. Since she first began submitting them in November of 2020, her Herald “Choosing Joy” columns have been all about using all of the everyday joys in life — being a mother, a wife — as a lighthouse in the darkness.

“When I was diagnosed with ALS, I started to see a therapist who taught me to focus on the joys in my life instead of the disease. Every column is about a joy that I discovered,” Lysne says. “It often involves something that I learned.”

No one ever knows how much time they have left — but the urgency of fiercely living every day is heightened when running a race against an incurable condition. Lysne will participate in a drug trial next month for a new medication proven to slow the progression of ALS in some patients in previous trials. But in the meantime, she will continue doing the things she loves to do for as long as she can: work on crafts with friends, attend social events and spend time in nature. The strength in her hands and arms is affected the most, she says.

After retiring, Lysne missed being involved with the community. Her columns, and now her book, have helped her feel reconnected.

“Choosing Joy” is available at Coffee House on Main, Sweet Reads and at sarahlysen.com. All of the book proceeds will go to the ALS Association Fund. Lysne lives in Austin with her caregiver and husband, Todd, and her old coonhound, Festus.

“I want people to know that they should never feel alone with their struggles in life,” Lysne says. “We all have something that is difficult, but there are still moments of joy to be found.”