Tango for everyone: Argentines bring the world of their native dance to Minnesotans 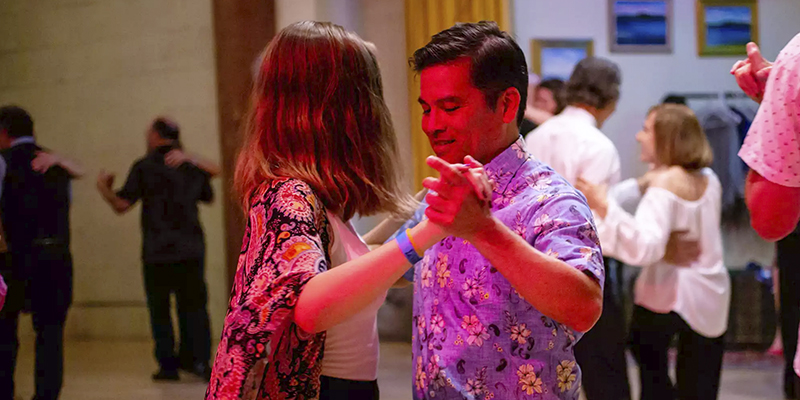 As the music begins, couples take to the dance floor. They move effortlessly. Their bodies so close not even a whisper-thin silk scarf could glide between them.

High heels seem to barely touch the floor, making only the slightest of sounds.

If you close your eyes, you can easily imagine you are at a milonga in Buenos Aires.

But this is Minneapolis, so it’s likely you are at Milonga Mala Yunta, which takes place the fourth Saturday of the month at the Four Seasons Dance Studio.

Tamara De Marco, Maria Benaros and Liliana Imwinkelried, who are from Argentina, founded Bataclan Tango as a way to promote Argentinian culture. And Milonga Mala Yunta, where people from all ethnicities go and dance tango, is part of that.

Individuals can dance tango every weekend in the Twin Cities, but Milonga Mala Yunta is different.

“We are the only milonga in the Twin Cities where we also dance chacarera, which is folkloric dance and is very, very popular in Argentina,” Benaros said. “And it’s also danced in the milongas in Buenos Aires. I think we have the most authentic milonga. It’s the only one organized by Argentineans.”

For those who’ve discovered tango and for whom it’s become a part of who they are, tango can become, and often is, an addiction.

“He had marriage problems because of that. His wife didn’t dance tango and he went by himself to dance. When that happens, it can be a problem,” De Marco said.

In Argentina, there are milongas from Monday to Monday beginning at night and lasting until 6 a.m.

“Some people go to a milonga, then they take a taxi (home), shower and then they go to work. And then they come back and take a nap. Then they go again (to the milonga). And that’s when it becomes a problem,” Benaros said.

No matter where they go in the world, tangeros will find a milonga. And that’s the case for Mehri Monadi.

Monadi, who is Iranian, moved to Minnesota four years ago with her husband to be close to her children. It was not long after she found Milonga Mala Yunta.

“It’s like a drug, but a good drug for the body, mind and it’s joy,” Monadi said.

On this Saturday night, at Milonga Mala Yunta, she took to the dance floor in her black lace dress and black and gold heels. She and her partner moved to the rhythm of the music. She deftly took her leg and moved it between her partner’s, before entwining her leg with his.

In Dubai, where she lived for 34 years, she became a tango aficionado. Monadi has been dancing tango for 14 years.

Tango is not only about dance and joy, but it is also psychology, Monadi said.

“When you dance tango, you forget all the pain, all the bad things, all the tiredness, everything. Now, tango is my life,” she said.

But what attracts people to tango?

De Marco said that initially it could be old movies — think Rudolph Valentino in those silent movies from a century ago — and the magical way it’s portrayed.

“So, maybe they start because of that, but then they realize that it’s different. And then they just cannot leave.”

De Marco quickly added that for people in Argentina, it’s part of who they are.

When it’s 11 p.m. at Milonga Mala Yunta, it’s time for the chacarera.

Those, who up until now have been sitting and watching, head to the dance floor.

The exuberant folkloric dance is very easy to learn, De Marco said. Unlike the sensual movements of the tango, the chacarera is filled with energy, clapping and stomping.

For Benaros’ 12-year-old daughter tango is a natural part of her life.

“I just want to keep that with me wherever I go. I don’t really want to leave my culture back. And tango is part of that,” Jasmine Grinberg said.

Benaros says it’s important that tango is passed down to her daughter.

“She sees that it’s really part of my family. My parents dance, my grandparents used to dance, my siblings dance. It’s just part of who we are. It’s a part of who I am and who she is,” Benaros said.

Vicki Adame covers Minnesota’s Latino communities for MPR News via Report for America, a national service program that places journalists into local newsrooms to report on undercovered issues and communities.