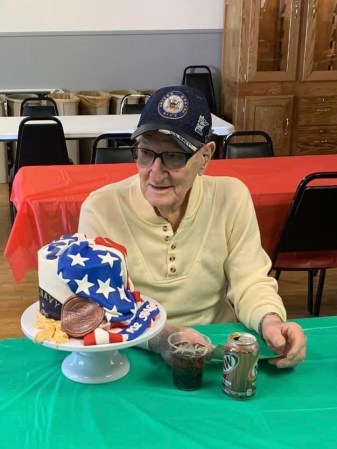 Sylvester “Sy” Schaefer passed away peacefully at St. Mary’s Hospital in Rochester on Saturday, June 11, 2022 at the age of 96.

Sylvester “Sy” Schaefer was born Dec. 25, 1925 to Joseph and Celestine (Winkels) Schaefer. He had 4 brothers and 4 sisters. He grew up in Austin and resided here all but the 6 years he was in the Navy during WWII. He served on a submarine as a mechanic. When returning to Austin he went to work at the Hormel Plant for the next 43 years before his retirement.

In 1972 he married Genevieve “Toots” Granle. She had two daughters and a son. He took over the role of father instantly.

Sy was very active in the Moose Lodge, American Legion and VFW. He held every office in the Moose Lodge and Legion of the Moose. He received the highest honor being awarded the Pilgrim degree at high noon at Mooseheart in Illinois. He was also very active in the VFW. He held numerous office positions there and belonged to the Military Order of Cooties. He still held an office in the Cooties up until his passing. He volunteered at both organizations on many occasions.

Recently he has been spending his time going to Bingo a couple times a week and playing cards with his cousins George and Linda. He also enjoyed going to the casinos whenever he could get someone to take him. He enjoyed going out to breakfast with good friends Gloria and Bob. Up until the last few years he enjoying doing repairs around the house and making animal and people cut outs for the grandkids.

He so enjoyed taking his grandsons hunting. He and Erik spent many days out driving the back roads and stopping at all the little convenience stores to get soda and snacks. They so enjoyed there time together.

Sy was a kind man and will be dearly missed by many.

He is preceded in death by his wife Toots, daughter Barb, son Gary and his wife Linda. Grandson Randy and great great grandson Andrew. Also his parents, 4 brothers and 4 sisters.