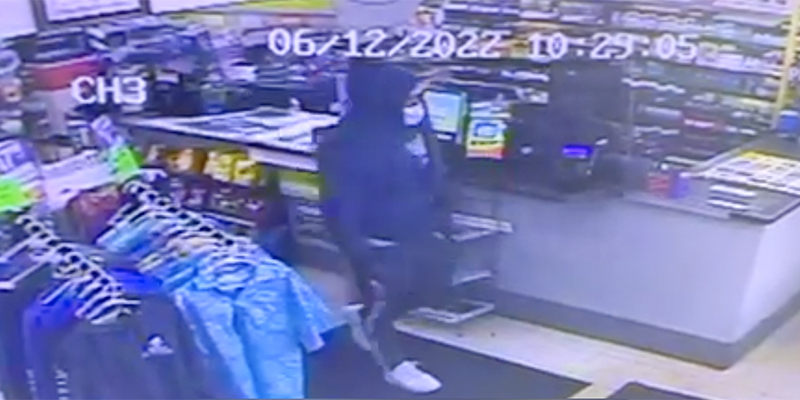 Security camera footage shows the suspect of an armed robber walking from Reeds Fourth Avenue Convenience Store Sunday morning at around 10:30 a.m. Anybody with information is urged to call the Austin Police Department. Photo taken from security footage.

The Austin Police Department is looking for a suspect involved in an armored robbery at Reeds Fourth Avenue Convenience Store Sunday morning.

According to a press release from the Austin Police Department’s Capt. Todd Clennon, the suspect entered the store, located at 901 Fourth Avenue NE, at around 10:32 a.m. Surveillance video obtained from the store showed the suspect pull a large knife and point it at an employee demanding money. The employee complied and the suspect left with an undetermined amount of money.

According to the release, a citizen followed the suspect to a nearby home and contacted the police. The residence was cleared by the Special Incident Response Team without locating the suspect.

The suspect is described as an African American male with brown eyes and was wearing a “Boys in the Hood” white T-shirt, black sweater, black pants and white medical mask. The employee also told police she believed she recognized the male as a frequent customer, but couldn’t positively identify him.

No one was injured.

Anyone with information is encouraged to contact Austin Police Investigations at 1-507-437-9400.