‘Small businesses are the backbone of this country’ 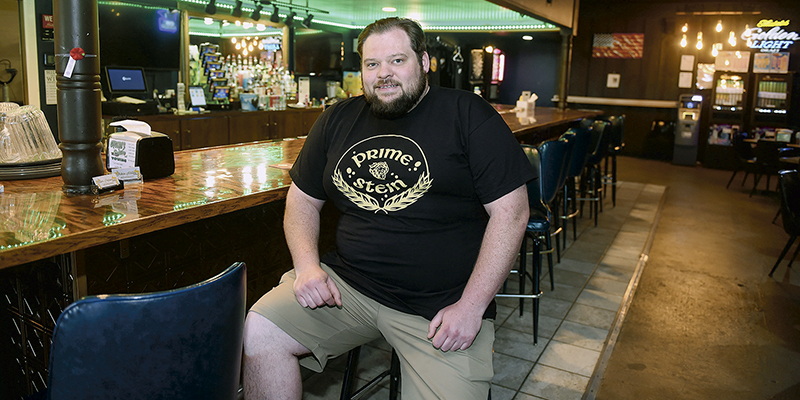 Steve Patterson, co-owner of Lansing Corners, has announced that he is running for governor of Minnesota with an eye of supporting small businesses. Eric Johnson/photodesk@austindailyherald.com

A local restaurateur wants to see better treatment for small business owners, and he’s putting his name on the ballot for governor to facilitate that change.

Steve Patterson is co-owner of Lansing Corners and in November of 2020 he made a Facebook post proclaiming that he would submit his name to the governor ballot if he received 100 likes. Now, 129 likes later, he’s running for governor. As an unknown name with no political background, he sees this move as a first step into the sphere of influence to bring about more attention to small businesses from the statehouse.

“I’ve seen people that helped me get to where I am have their businesses closed because of what happened in 2020,” Patterson says. “The response to COVID and how small businesses were treated differently than large businesses is really my motivation [to run].”

Through his many work endeavors, ranging from the restaurant industry to entertainment and including an almost-two-year stint working security for the Mayo Clinic, Patterson says he’s gained valuable knowledge of challenges faced by average Minnesotans and how the pandemic has impacted mental health.

Patterson states that large businesses were given looser reopening guidelines than their smaller counterparts when pandemic restrictions relaxed, giving way to an opportunity for decreased competition, price gouging and monopolistic environments. Overall, the candidate hopes to see better advocacy for entrepreneurs, especially those in food and dining. He recalls watching his drink freeze before his eyes sitting on the patio of Whistle Binkies in Rochester during winter temperatures — restaurants had only been permitted to open their patios at that time.

With an eye toward supporting small businesses in Minnesota, Lansing Corners co-owner Steve Patterson is running for the governor’s seat in Minnesota. Eric Johnson/photodesk@austindailyherald.com

The Austin business owner says places are still reeling and suffering from loans taken out 18 months ago to stay afloat. Adding in inflation and the skyrocketing costs of meat and gas, restaurants are struggling, especially when one gallon of gas costs half an hour of working at minimum wage.

Patterson is running on the Grassroots – Legalize Cannabis ticket with the stance that “it’s time to just get it done,” he says, for its medical and economic benefits. Other highlights on his campaign platform are the intent to remove taxation on hours worked over 40 in a week “so people who need to work themselves out of debt, feed their families, or just work extra hard” can do so without penalty and the intent to promote independence for people receiving state benefits.

People were “trained how to be unemployed” during COVID, Patterson said, and the mental health impacts of sustained unemployment and consequences for small businesses are significant.

The candidate was also frustrated by the vaccination push. As a vaccinated person, he says a line was crossed to suggest that people shouldn’t attend holidays with their families for being unvaccinated. Patterson says he once spoke with Gov. Tim Walz on a visit to the Mayo Clinic, where he asked as an aspiring business owner when the restrictions would be lifted.

“He laughed at me,” Patterson states. “And he said, ‘have a nice day.’ On a personal level, that affected me as a person who’s voted for Tim Walz before. … That was the turning point where I thought that I really don’t think this guy has small business’ and the citizens’ best interests in mind.”

Even if the election doesn’t fall into his favor, Patterson says he will continue to promote the change he wants to see in Minnesota.

Patterson is a graduate of Rochester Community and Technical College and Winona State University, where he received an elementary education degree.