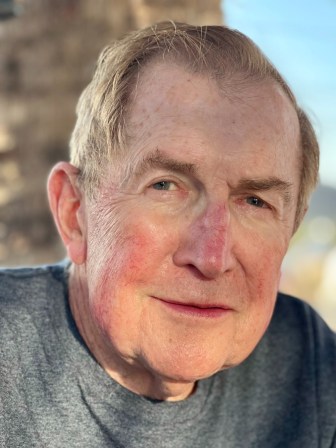 Robert (Bob) Joseph Loecher, 77, passed away peacefully on May 31, 2022 after a short bout with an unexpected health issue.

He is survived by his loving wife of nearly 52 years Kathy, his daughter Shannon and son Chris, daughter-in-law Melissa and their daughter Velouria. Bob had two older sisters, Sister Lorraine Loecher and Sister Joanne Loecher. He was proceeded in death by his parents, Ruth and Peter Loecher, and beloved twin sister Betty and her husband Jerry Leif.

Born and raised in Austin, Minnesota, he graduated from Pacelli High School and attended Minnesota State Mankato. Bob spent his entire 50+ year career in sales and customer service in the corrugated box industry, relocating to Maple Grove, Minnesota in 2002 to expand his sales territory. Even in “retirement”, Bob maintained his work and book of business with his own independent sales company. For the past eight years he was also a stellar employee at Menards in Maple Grove, a part-time job he absolutely loved and for which he received Employee of the Month honors.

Bob and Kathy, known to everyone as “Bob and Kath”, met on a blind date and married in 1970. They loved to explore the Twin Cities, especially to find the best restaurants and most fun dive bars. They also loved to travel, with San Jose del Cabo ranking as their top destination and providing a long list of favorite memories and experiences.

A big sports fan and Minnesota sports team loyalist, Bob was a tried and true Golden Gophers Football season ticket holder and tailgate ringleader for more than 20 years. He was known for his hospitality, his “more-the-merrier” philosophy and for his bloody mary bar.

Bob was an exceptional husband, dad, brother and friend, but his greatest joy came from his new role as Grandpa. Velouria was the apple of his eye, he couldn’t resist buying up every cute outfit and play item that caught his attention, and loved that the email updates and Zoom calls helped to make the distance seem less far.

Funeral will be held at 10:30 a.m. on Friday, June 10 at St. Vincent de Paul Catholic Church in Brooklyn Park, MN. Visitation with the family will begin at 9:30 a.m.

In lieu of flowers, memorials in Bob’s honor are suggested to: