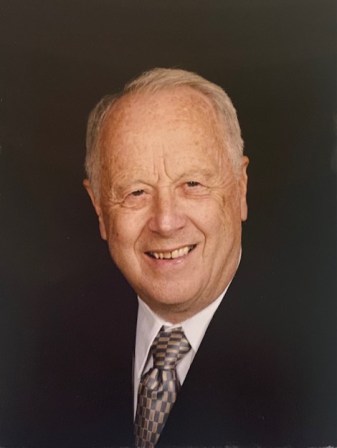 He was born October 19, 1929 in Austin to Lloyd and Esther (Killoren) Titus. Richard was baptized and confirmed at St. Augustine Church. He graduated in 1947 from St. Augustine High School (now Pacelli High School). Upon graduation, he started work in the office of George A. Hormel and served a three-plus year enlistment in the National Guard. In October 1950, he joined the US Navy and until 1954 served on three aircraft carriers. Upon discharge, he entered Austin Junior College for one year, transferring to the College of St. Thomas where he attained a BS Degree in Business Education.

On August 12, 1961, Richard Titus and Irene Hebert were united in marriage at St. Stephen’s Church in Minneapolis. They had four daughters: Jacqueline, Renee, Michelle, and Noelle.

Starting in 1964, he taught business subjects for three years in the high school at St. Croix Falls, Wisconsin. In 1967, he started the Data Processing Program in the Business Education Department of the then Austin Vocational-Technical School (now Riverland Community College). During his tenure, he acquired an MS Degree in Business Education from Mankato State University. He retired in May 1994.

During his college years, Richard spent time as a dance instructor at Arthur Murray’s in Minneapolis. Later, he and his wife, Irene, also enjoyed teaching a large variety of Ballroom Dance classes for nearly twenty-five years through Austin Community Services. While teaching in Austin he held several positions: as a board member of the Parenting Resource Center for eleven years and a board member to the Austin Chapter of the American Cancer Society. He trained and taught CPR for the American Red Cross. He was an educator selected to work in the Washington, DC office of Representative, Tim Penny for nine weeks in the summer of 1992.

Richard was active at St. Augustine Church in several ways: serving on the Finance Committee, singing in the Guitar Group Choir, volunteering in the computer classroom at St. A/St. Ed Elementary, and weekly lay-distributor to hospital patients.

He was an avid bike rider especially after getting his recumbent bike. He participated in several Ride Across MN for Multiple Sclerosis fundraisers and was fortunate to share those experiences with his daughter, grandson and granddaughter.

His hobby of making wire-name ornaments for just about everyone within reach, especially for newborn babies and children, put a smile on many faces. He was quoted as saying, “You can’t go wrong if you use a person’s name right.”

Richard most enjoyed spending time with his wife, Irene and their children and grandchildren.

A special thank you to the staff at Auburn Meadows Memory Care for the care and love shown to Richard over the last four years in Waconia. Thank you also to Ridgeview Home Care and Ridgeview Hospice.

A Funeral Mass will be celebrated 10 am on Friday, July 8, 2022 at St. Augustine Catholic Church with Father James Steffes officiating. Visitation will be at Mayer Funeral Home on Thursday, July 7 from 5 to 7 pm, with praying of the Divine Mercy Chaplet at 5 pm. Visitation will continue Friday morning for one hour before Mass at the church with a Rosary at 9 am. Military rites will be by American Legion Post #91 and V.F.W. Post #1216. Interment will be in  Fort Snelling National Cemetery.

In lieu of sending flowers, a memorial donation in Richard’s memory can be made to St. Augustine Catholic Church or donor’s choice.