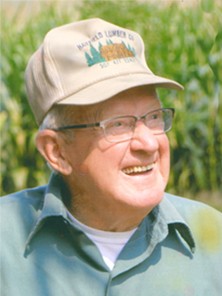 Richard C. Jensen (age 89) of Sargeant passed away on June 10 after suffering a stroke. He was born May 24, 1933 at the Jensen Homestead in Sargeant Township, Mower County to Walter and Emily (Steigerwald) Jensen. Richard attended country school at the “schoolhouse in the woods” through grade eight, then to Austin High School, graduating in 1951. He was a lifelong member of Evanger Lutheran Church, having been baptized and confirmed there. He loved to serve his church through the years with many different positions on the council as well as cemetery board. In 1954, Richard was drafted into the US Army, where he was assigned as a mechanic for half-tracks, tanks, half-ton trucks and jeeps. He was stationed in Germany before his discharge in 1956. Richard had a custom corn shelling and trucking business before he found his true passion in being a mechanic and opened Jensen Repair. The business ran successfully for 60 years, where he repaired many local trucks, tractors and cars and enjoyed the social time with his customers. In 1960, Richard married Alice Hatten of Brownsdale and they began their life together in rural Sargeant, raising their four children and becoming active members of the church and community. Together they loved to play cards, dance to old time polkas and waltzes and get together with the Rural Youth group every month to socialize. Richard loved black licorice, chocolate of all kinds and German chocolate cake. He taught us all how to repair things around the house and enjoyed helping with our projects. Upon returning from the Army, Richard joined the American Legion, Post #330 of Hayfield and served proudly for 60+ years. He helped to organize the local color/honor guard, then faithfully marched with them at hundreds of parades, football games and funerals through the years. He also served as Commander, Vice-Commander, Adjutant, Historian and Chaplain on the local, district and department (state) levels. Richard could also be found in the legion kitchen frying up steak or fish to feed hundreds. The Legion gave him the opportunity to travel and make life-long friends. Richard is survived by his daughters, Cheryl (Philip) Woodward of Pine Island, MN, Linda Jensen (Rich Snyder) of Phoenix, AZ, and sons Mike (Betsy) Jensen of Ft. Collins, CO and Grant Jensen (Scott Neitzel) of Afton, MN. Grandchildren include Billy Woodward of Mankato, MN, Claire Woodward of Rochester, Tegan Neitzel and Tyler Neitzel of Afton, Sam Jensen and Riley Jensen of Ft. Collins. He is also survived by his sisters, Doris Sheely of Dexter and Mary Ann (Lawrence) Duncomb of St. Ansgar, IA. Richard was preceded in death by his wife Alice (2019) and his parents. The visitation is scheduled for Tuesday, June 14, 4:00-7:00 PM at Czaplewski Funeral Home 501 2nd Street NW in Hayfield, MN. The funeral will be held on Wednesday, June 15, at Evanger Lutheran Church 33554 660th Avenue of rural Sargeant, MN, beginning at 11:00 AM with visitation one hour prior. Military rites will be provided by the American Legion, Post #330 of Hayfield. All arrangements are being handled by Czaplewski Family Funeral Homes. The family requests no flowers. Instead, memorials may be directed to the Hayfield American Legion Post #330 or the St. Olaf Heritage Association.

“Die young and as late as possible.”

To share a special memory or condolence please,  visit www.czaplewskifuneralhomes.com