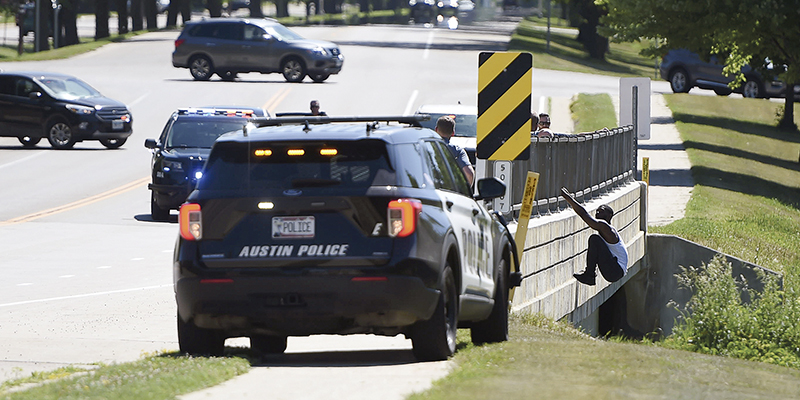 Austin Police work to talk a man off the bridge above Turtle Creek on Oakland Avenue West Wednesday morning following an incident at Meadows West apartment complex. Details of the incident haven’t been released as of yet. Eric Johnson/photodesk@austindailyherald.com

An Austin man has been arrested in connection to an incident Wednesday morning that shut down a bridge briefly over Turtle Creek on Oakland Avenue West.

Police were dispatched to Meadow West apartment complex on a report of a domestic disturbance that also involved a mental health crisis, according to Capt. Todd Clennon.

The incident eventually led to the male suspect, Malik Lymon, 26, fleeing the scene. He proceeded east along Oakland Avenue West to the bridge over Turtle Creek where he climbed over the side and stood before police were able to talk him back over and took him into custody.

He was later arrested for domestic violence at around 10:30 a.m. and is currently in Mower County Jail pending official charges.

There were no injuries in the case and there is no current threat to the public.

Clennon said police are still in the early stages of investigating the case.