Parks and Rec details next steps against EAB 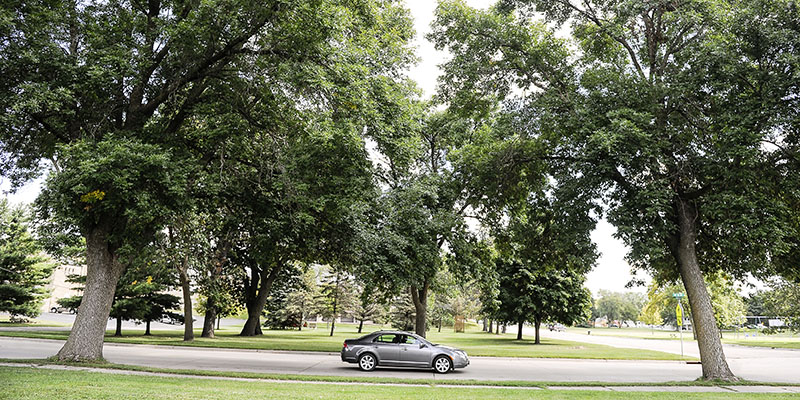 A car is framed between two green ash trees along Eighth Street Southeast in this 2017 file photo. Herald file photo

Emerald Ash Borer discovered in Austin in late May

Citizens of Austin will play a significant role in mitigating the impact of the Emerald Ash Borer after it was discovered in Austin in late May.

That’s the message director of Austin Parks, Recreation  & Forestry Dave Merrill wants people to know as the city moves forward with its plans to control the damage the insects can cause to ash trees.

The city is starting to implement a plan on how to handle the infestation of the EAB,  which damages trees when its larvae tunnels through the tree at the point where nutrients are carried up and down the tree.

According to Dave Merrill, Austin’s new director of the Parks, Recreation & Forestry Department  in a press release Thursday,  the city will begin infected tree removal from public spaces after Nov. 1. There will also be discussion of possible disposal areas where residents may dump their infected ash.

“We may not take down healthy trees to begin with,” Merrill said. “We’ll take down the sickest ones first. Just like everyone else, we might get five or six years out of this tree.”

Merrill is also urging people that this is not a panic moment. The reality is EAB is in Austin now and that’s something that can’t change. What can happen is a lessening of the impact EAB may do to the community.

The Minnesota Department of Agriculture will come to Austin this year to do a survey of the most affected areas in Austin. A separate survey will be conducted at the Jay C. Hormel Nature Center, which has a large population of ash trees within its boundaries.

Parks, Recreation & Forestry will use this data to determine the proper course of action for tree removal.

One of the most important things is making sure residents are aware that EAB is in the area and to begin making decisions on what they’d like to do with their ash trees.

In citing the Department of Ag, Merrill stated in Thursday’s release that if residents want to save their ash trees, then they should begin having their trees treated with insecticide this summer. The most important message is do not transport ash.

According to the release, the basic options for a property owner are the following:

• If the ash tree still looks healthy enough after leaf out (no more than 30% canopy decline), you can begin having it treated with insecticide to begin protecting it this spring/summer. This is an annual or biennial expense and best to have a certified arborist assess the health of the tree and apply the treatment. If the tree is over 15 inches in diameter at breast height it is important to have a licensed pesticide applicator treat the tree. The chemicals available to the average homeowner typically aren’t rated for trees that size or larger. Homeowners guide to insecticide selection

• If the tree is past the point of being a good candidate for treatment or you would prefer not to go that route, plan to do removals during fall, winter or early spring. Try to avoid doing any pruning or removals during the summer months when EAB is actively flying around. Ash trees become very brittle and hazardous quickly after they die and that can greatly increase removal costs depending on where it happens to be located in the yard. It typically takes about three years for signs of infestation to become initially visible (i.e. woodpecker damage in branches 3-5 inches in diameter) and a total of five to six years for EAB to kill the tree.

• If the ash trees are in a natural area where they don’t pose hazards to persons or property, they can be left to die and fall apart.

As for the wood, it is best if it can be kept as close to where it was cut as possible. You can save it for firewood and burn on-site if you have a fire pit, bring to closest tree waste disposal site, or have a tree care company haul it if you hire one to cut the tree. It is important that the wood doesn’t get hauled outside of the known infested area and emerald ash borer quarantine restrictions are followed.

The Parks, Recreation & Forestry Department also strongly encourages residents to begin repopulating their property now if they feel they will be losing ash trees from their property.

“The other message we want to push is being proactive,” Merrill said. “Start planting trees now so you don’t end up with a barren back yard. Being proactive is the best approach to this.”

The city is currently working on a repopulation plan for public spaces.

The locations of confirmed trees are visible on MDA’s (Minnesota Department of Agriculture) EAB Status Map. The map has a buffer around known infested points called the “generally infested area” and this means any ash tree within that area has a high likelihood of having EAB at some level whether showing signs of infestation or not.

More information will be made available in coming months  and can be found at www.mda.state.mn.us/eab-info-homeowners.