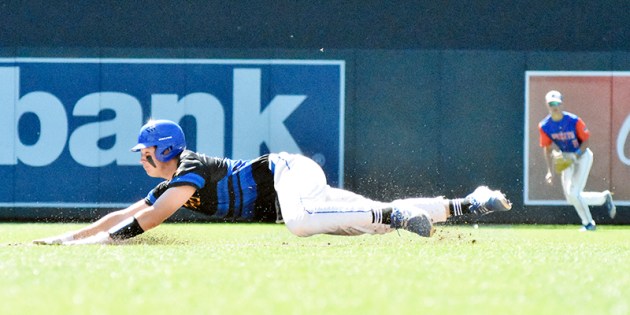 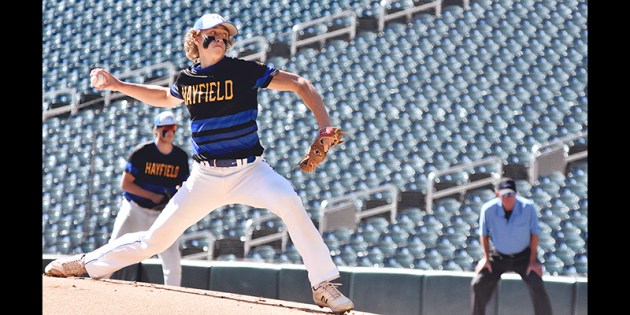 Nolan Klocke pitches in the first inning for the Hayfield baseball team in the Class A title game in Target Field Friday. Rocky Hulne/sports@austindailyherald.com 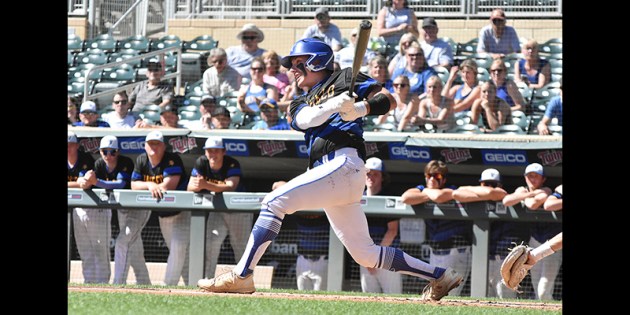 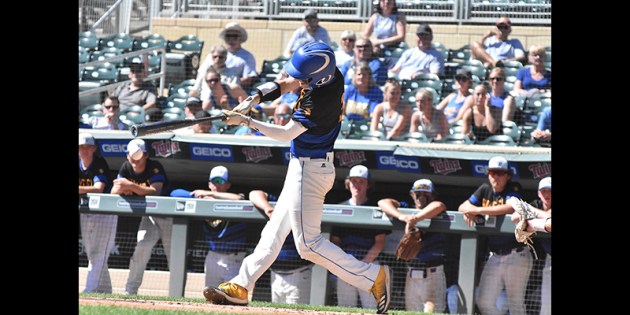 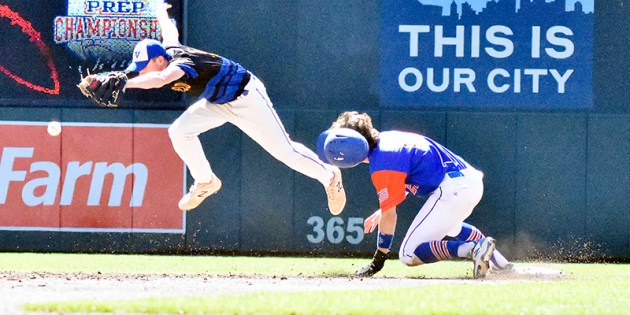 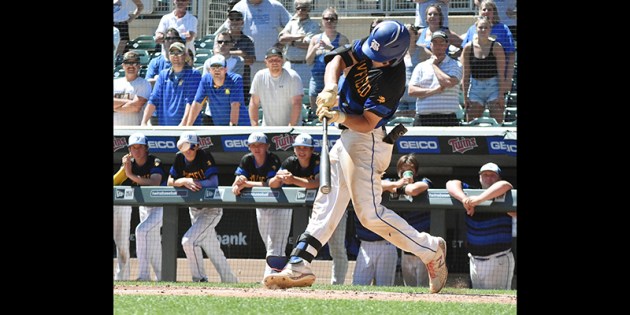 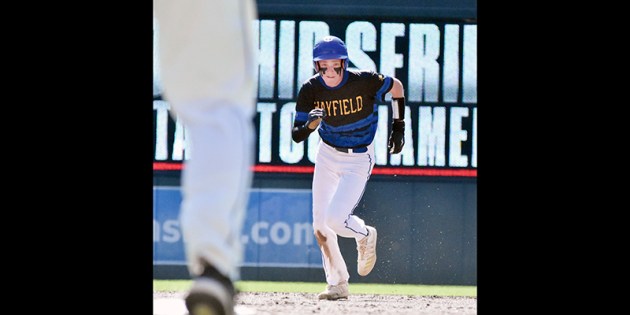 Hayfield's Aidan Nelson sprints towards third base en route to scoring a run in the second inning of the Class A title game in Target Field Friday. Rocky Hulne/sports@austindailyherald.com

MINNEAPOLIS — Hayfield senior pitcher Nolan Klocke did exactly what he needed to do, but it wasn’t enough as a couple of defensive miscues and struggles at the plate proved costly for the Vikings, who lost the Minnesota Class A State Baseball Tournament title game to Gopher Conference foe Randolph 2-1 in Target Field Friday.

Randolph (25-1 overall) took the lead for good in the top of the fifth inning when Mason Lorenzen pushed a grounder to the right side of the infield. Hayfield made two errors on the ball and Lorenzen ended up on third base. He scored on a one-out passed ball to make it 2-1.

Klocke gave the Vikings (24-3 overall) everything he had as he struck out 15, while allowing just three hits and zero walks.

“My goal was to keep them under three runs and not walk anybody and that’s what I did. Our hitting just let us down. We needed to hit a little bit better,” Klocke said. “We’ve got a lot of young kids out there and the errors have been common. We had to bounce back from that and we did, but we didn’t bounce back enough I guess.”

Hayfield, which had a 17-game winning streak snapped, had just three hits as it struggled to create any momentum after Zander Jacobson had given the team a 1-0 lead with a two-out RBI single in the second.

“Both pitchers were great. We can’t have four errors and expect to win the baseball game,” Hayfield head coach Kasey Krekling said. “The pitching and hitting were similar, but their defense was better than our defense today. We’ve played each other enough where we knew it was going to be a great game. No one got cheated for their money today.”

Randolph tied the game at 1-1 when Andrew Jenkins doubled in a run with one out in the third.

Easton Fritcher drew a six-pitch walk with two outs and stole second, but Klocke lined out to shortstop to end the game. Fritcher flew out in his first at-bat and was intentionally walked twice.

“It’s frustrating,” Fritcher said. “It’s something I have to deal with after building that reputation. I’ve been known to hit the ball well and that’s something that happens. You have to trust your teammates, and unfortunately they didn’t come through today, but they did all season. This game doesn’t define who we are at all.”

Randolph pitcher Jacob Weckop received the unexpected start over his twin brother Nathan Weckop, who was suspended for the title game after being ejected from a state semifinal game due to a play on the field. Jacob struck out 13 Vikings and he forced Jacobson to ground out to end a threat when Hayfield had runners on first and second in the bottom of the sixth.

“I wasn’t expecting to pitch,” Jacob said. “You’ve got to deal with adversity. With our starting pitcher not being able to pitch, I knew I had to play for him. It was his dream to play here and it was our dream to play here. I came out with a fire.”

Fritcher said the Vikings had faced off against Nathan before, but they hadn’t seen Jacob much.

“I’ve seen his brother more, but they’re very similar. They mix their pitches well and they use the zone and their defense well,” Fritcher said. “He got the better of us. That’s a great team and a great pitcher. They played better than us today.”

While things didn’t end well for the Vikings, the senior class leaves a strong legacy that includes three state trips in the last three seasons played and the school’s first ever baseball state championship in 2021. Krekling was happy his team got to play on the big stage one last time.

“I’m glad the boys were able to fulfill their dream of playing here again and I know next year’s seniors want to do it too,” Krekling said. “They don’t want to be the team that doesn’t come back here.”